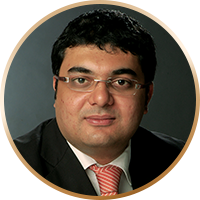 Vivek Vashi is recognised as a leading dispute resolution practitioner in India. He commenced his career in law as a trainee in 1999 with the erstwhile Amarchand & Mangaldas and was subsequently retained as an associate in 2002; and as a senior associate after he qualified as a solicitor in 2004. In 2008, Vivek co-founded Bharucha & Partners.

Vashi and Vashi was founded in 2017 by Vivek, after he parted ways with his former firm along with his entire team of 17 associates in order to set up an independent practice in Mumbai.

Following a spectacular run over the past years, Vashi and Vashi now handle complex and high-stakes disputes across India. This includes litigation before all tribunals (NCLT, NCLAT, NGT etc.), courts including high courts, the Supreme Court; domestic and international arbitrations including LCIA, SIAC arbitrations.

Vivek has always dealt with intricate disputes and multifaceted litigations and has made his mark as the forerunner for dispute resolution in Mumbai. His hands-on approach coupled with innovative thinking has allowed him to offer pertinent advice and representation for his clients across a broad gamut of matters, such as company disputes, construction disputes, family disputes, economic offences, white-collar crimes, bankruptcy and insolvency and renewable energy, reforms in various sectors such as telecom, infrastructure, real estate, bankruptcy and insolvency etc. Vivek also guides his clients when negotiating on large transactions to thwart and/or insulate themselves from potential disputes. Vivek is retained as advisors by family offices in relation to their investments, succession and other matters.

Vivek has been recognised by Chambers and Partners repeatedly; and has been ranked in India Business Law Journal’s A-List of top 100 Indian lawyers for several years consecutively. He has also been commended by Asialaw, Legal 500 and Who’s Who Legal. His hands on and personal approach has earned him the adulation of clients and the respect of his opponents.