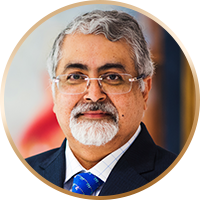 Shardul S Shroff is the founder and executive chairman of the firm and also heads the firm’s insolvency and bankruptcy practice.

In a short span of three-and-a-half years since the Insolvency and Bankruptcy Code was introduced by the Government of India in December 2015, the practice established by Shardul in this domain has built a leadership position. Under his mentorship, the firm was recognized as the Best in Insolvency at the Asialaw’s Asia Pacific Dispute Resolution Awards, 2018.

Shardul has been consistently rated as a leading lawyer by several international fora and publications, including the Who’s Who Legal, AsiaLaw, Chambers and Partners, Legal 500 and Euromoney etc.

International Financial Law Review (IFLR) 1000, 2022 – The Guide to the World’s Leading Financial Law Firms notes Shardul as a market leader in the areas of Mergers and Acquisitions, Restructuring and Insolvency, Energy and Infrastructure, Project Development, Banking, Project Finance, Capital Markets: Debt, while Chambers and Partners, 2022 views Shardul as an Eminent Practitioners in B&F & Restructuring/Insolvency and & Star Individual in Corporate & M&A space who is known for his long-standing experience handling joint ventures, takeovers, divestments and commercial contracts.

He has been a member of the Insolvency Law Committee, formed by the Government of India to review the implementation of the Insolvency and Bankruptcy Code. He was also a member of the high-powered committee to review decriminalization of offences under the Companies Act and the Committee on Cross-Border Insolvency; The ET India Leadership Council; Esteemed member of CII National Council on Services 2020-21; Counsellor to the President of the UIA (International Association of Lawyers), Jorge Martí Moreno; Chairman, FICCI national committee on stressed assets; Member, CII Taskforce on covid-19 vaccine.

Among other numerous recognitions, Shardul is also a recipient of the National Law Day Award from the President of India for his unique contribution to the field of corporate law and leadership in its practice, and for being instrumental in advancement of India’s corporate law practice at international standards. He has been recognised as one of “The Game Changers of India, 2018” by The Economic Times.