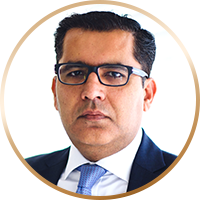 Jatin has led several precedent setting and high value transactions that have hugely impacted the projects and infrastructure landscape of India.

Chambers and Partners, 2022 features Jatin as ‘Band 1’ lawyer for Projects, Infrastructure & Energy. He has advised on a series of award-winning transactions and has been consistently ranked in “Band 1” in the Projects, Infrastructure and Energy practice by Chambers and Partners and as a “Leading Lawyer” by The Legal 500 (each year, from 2009 to 2021), IFLR1000 2022 ranked Jatin as ‘Highly Regarded’ for Energy and Infrastructure, Project Development, Project Finance, M&A. Jatin was recognized as an “Global Leader” by Who’s Who Legal – 2021 Energy and Project Finance.