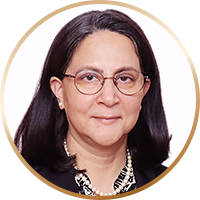 Gopika Pant has more than 36 years of legal experience, and is dual qualified in India and New York. She completed her BA (Hons) in history from St Stephens College (1982) and LLB from the Campus Law Centre, Delhi University (1985) following which she was admitted to the Bar Council of Delhi in the same year. She completed her LLM from Columbia University (1986) then was admitted to the New York State Bar Association (1987). She is also a member of the ABA and the Supreme Court Bar Association. Gopika previously worked in New York, then returned to India, was named a partner in a leading law firm before setting up Indian Law Partners in 1999.

She is a keen environmentalist and has also completed a Diploma in Environmental Law with the WWF. She is an enthusiastic public speaker and has addressed several international conferences. She has also authored articles in various Indian and international publications.

Gopika is also a keen sportswoman having been ranked No. 1 in badminton and No. 2 in squash in New Delhi and No. 3 in squash nationally, and has played several national level championships in India.