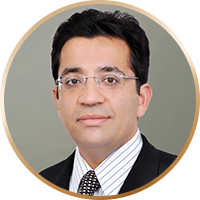 Bharat Anand is senior partner at Khaitan & Co’s office in New Delhi and leads the M&A practice in Delhi. Bharat’s expertise spans a range of areas including mergers and acquisitions, joint ventures and private equity transactions. Bharat is regularly approached as a strategic adviser on particularly complex M&A transactions or sensitive corporate governance situations in India.

Some of the marquee transactions Bharat has recently led are ReNew Power’s SPAC, representing Softbank in connection with several investments in India, Aakash Education on its sale to Byju’s and Manipal Hospitals on its acquisition of Columbia Asia’s portfolio of hospital sites in India.

Bharat joined Khaitan & Co in 2009 with direct responsibility for the firm’s corporate and M&A practice in Delhi, and is a member of the firm’s National Executive Committee. Prior to joining Khaitan & Co, Bharat had a successful career at the London offices of Freshfields from 2001 until 2009.

A dual qualified lawyer (India and England Wales), Bharat read law at Jesus College, Cambridge, as a Cambridge Commonwealth Scholar and is an alumnus of St Columba’s School. He is ranked as “Band 1 Lawyer” for M&A work in Delhi, by both Chambers Asia Pacific and UK and recognised as a Global Leader by “Who’s Who Legal” for M&A and governance issues.