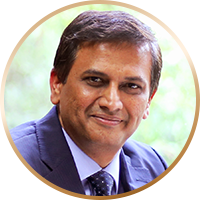 Suneeth Katarki is a founding and senior partner of IndusLaw. His areas of expertise include domestic and cross-border M&A, private equity and venture capital investments, joint ventures and corporate restructurings. He does a significant amount of work in the general technology regulatory and advisory space including data privacy, consumer technology and fintech as well as all areas overlapping technology in media and telecoms.

Legal 500 has also recognised him as one of the leading lawyers in private equity and investment funds, technology, media and telecommunications, data protection and intellectual property. Suneeth has also been named in India Business Law Journal’s A-List of top 100 lawyers in India for the past few years and one of the top 50 legal icons in India.

Asialaw Profiles 2022, 2021 and 2020 recognised him as Distinguished Practitioner for corporate and M&A after listing him as “one of the leading lawyers of India” for many years. Suneeth has been consecutively endorsed as a leading lawyer for financial and corporate law by IFLR1000 since 2018 and as one of the most trusted lawyers in India in the Indian Corporate Counsel Association’s publication The Vanguards.

Suneeth also writes and speaks extensively in the space he practises in and has several publications to his credit. He also serves on the boards of various organisations and is currently the vice chair of the India chapter of United Way the world’s largest charity organisation.