Being the change you wish to see is easier said than done. Rebecca Abraham reports on two philanthropic initiatives that do just that.

In October 2010, Bijesh Thakker, who was then managing partner of Mumbai-based law firm Thakker & Thakker, announced that he was closing the firm and its three offices at the end of the year. As a result of this unusual occurrence, the more than 50 lawyers who were at the firm, which Thakker had set up in 1990, had to search for new jobs.

However, what was even more unusual was that Thakker was leaving behind his successful legal career to devote himself full time to a philanthropic initiative that he and his wife had been working on for the previous eight years.

Today they are the brains and the moving force behind SMART EcoPark, a 20-acre park located in Panvel, a thriving suburb of Mumbai.

“My mother passed away in 2002 and she urged us to do something for children,” says Thakker, who describes his mother as his inspiration.

SMART EcoPark caters exclusively for children between six and 16. What began as barren land that had no access to electricity or water is today transformed with 200,000 plants and 27 buildings. It has been visited by around 40,000 children.

The park contains separate spaces intended to teach young visitors about achieving internal peace, coexisting with each other and with nature. Among the many demarcated spaces is a chocolate forest, an animal barn, a butterfly garden, a peace garden with six bubbles of peace and the magical dreamcatcher space.

“The dreamcatcher space is to help them understand the power of dreaming, which they are not allowed to do in today’s schools,” says Thakker, who adds the goal was to teach young people without subjecting them to lectures.

Thakker’s own dream began with his mother. But putting it into action required the ability “to put your hand into your pocket and take out your money and give”. He began doing this in 2004, when he started to channel all the money he earned at the firm towards building the park.

“That way you learn to give while you are earning and this is essential,” says Thakker, who admits that doing so was very difficult. “Everyone has good intentions but say they will work on it when they retire – this rarely happens.”

Thakker, who credits the teaching of his spiritual guru for his ability to leave his lucrative practice, remarks that being able “to feed the soul” was important for him.

“As lawyers we go to a mental gym every day. Some make an effort to go to a physical gym, but very few consider feeding their soul,” he says. “At 42 I stopped taking money home. Then when the park was ready it was time to walk away and we were able to surrender to the one above and to do so in the knowledge that everything is his.”

A WORD OF ADVICE

Philanthropy is arguably ingrained in the way of life and traditions of India. However, instances of individuals walking out of successful ventures to do good in this manner are few and far between.

Thakker believes that his career as a lawyer has helped him in his current endeavour. It taught him to see the benefits of what he does at a distance. For, as he explains, legal advice often results in clients making millions of dollars and the adviser in question has to stand back and enjoy it from afar. This, he says, is key in philanthropy. Does Thakker have any advice for other lawyers who want to be the change they wish to see, as Mahatma Gandhi famously put it?

“You don’t need to become white haired to embark on a philanthropic venture. To complete the circle of the mental, physical and spiritual, start early,” says Thakker. “In India we seem to remember Bhagvan and God and philanthropy when we are too old to take the risk of giving money and too old to create something. This is the challenge of our country.” 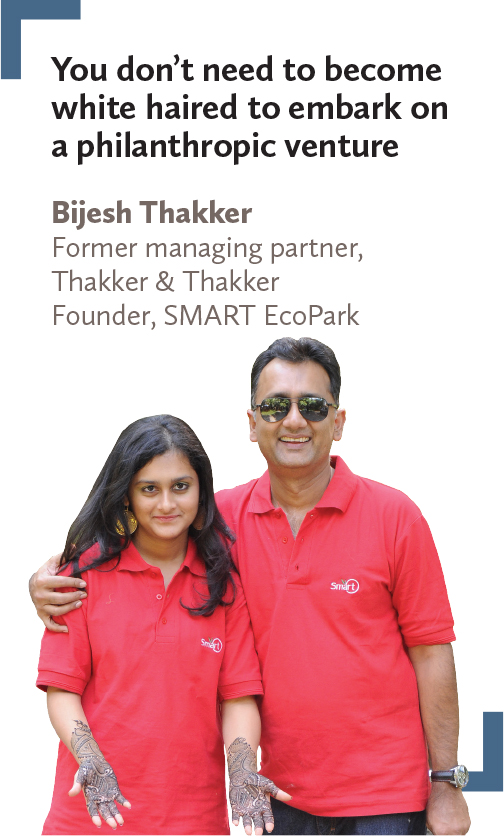 The diversity of India’s people is regarded as one of its many positives. But this may not be apparent at the National Law Universities, a group of 17 law schools that are the top choice of most students seeking a legal education.

According to Increasing Diversity by Increasing Access to Legal Education (IDIA) – a non-profit organization founded by Shamnad Basheer, a professor of intellectual property law and founder of SpicyIP – the National Law Universities “have become increasingly elitist over the years and there is a noticeable lack of diversity within the student population”.

The causes are varied and include the high fees charged at these institutions, an entrance examination for which students require extensive and expensive coaching, and “a lamentable lack of awareness about law as a career option amongst underprivileged communities”.

To correct this, beginning in 2010 IDIA set about making high school students from under-represented communities aware of the benefits of law as a viable, lucrative career, and also helping them gain admission to these law schools. The results have been remarkable.

India Business Law Journal recently spoke to two young people who have been helped by IDIA. 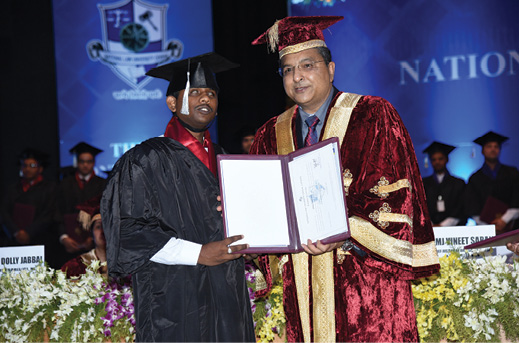 Arepalli Naga Babu graduated from National Law University in Cuttack, Orissa, in 2016. Naga Babu, who is blind, now aspires to be a judge. He had no interest in studying law initially, but changed his mind after Basheer visited his high school and spoke about the prospects of law.

“If I hadn’t met Shamnad Basheer I would have missed a massive opportunity,” says Naga Babu. “Now that I have a legal education I can do whatever I can to help my society.” 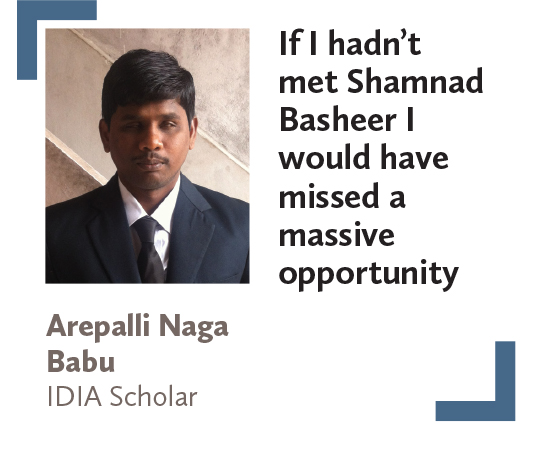 Naga Babu says that IDIA paid all his fees and covered all his expenses, including paying for resources such as scanners, which blind students need.

“The best part of IDIA is that they do not differentiate between me and other students … they treat everybody equally,” he says.

With help from IDIA, Naga Babu recently challenged the Andhra Pradesh State Judicial Services Rules, which did not provide for a blind person to write an exam for consideration as a judge.

“My being blind doesn’t matter as long as I can have support as a judge,” says Naga Babu, with confidence born from the knowledge that he is not on his own.

He believes that the legal profession is generally “scared to offer opportunities” to people with problems with their vision. His wish is that this can be overcome so that that people like him can have an opportunity to show that they can work just as well as anyone else.

Karthika Annamalai expects to graduate from the West Bengal National University of Juridical Studies (NUJS), Kolkata, in 2017, and then go on to a job at AZB & Partners in New Delhi. The odds of someone like her – the daughter of a stone quarry worker – reaching this point are almost zero. She beat the odds thanks to help from IDIA.

Annamalai used to dream of being a lawyer when she was about 12 years old. However, as she grew older such aspirations slipped out of her mind.

“I didn’t have the means to get into the field as I knew nothing,” says Annamalai, adding that she didn’t know of the existence of the National Law Universities or that she would have to do an entrance exam.

But following a meeting with IDIA volunteers who visited her high school she was on her way to a career in law. The assistance Annamalai has received from IDIA extends from financial assistance to support with traversing the considerable social challenges that she has faced.

“IDIA has some brilliant student volunteers at NUJS and they made sure that I didn’t face any financial hurdles or discrimination,” she says. 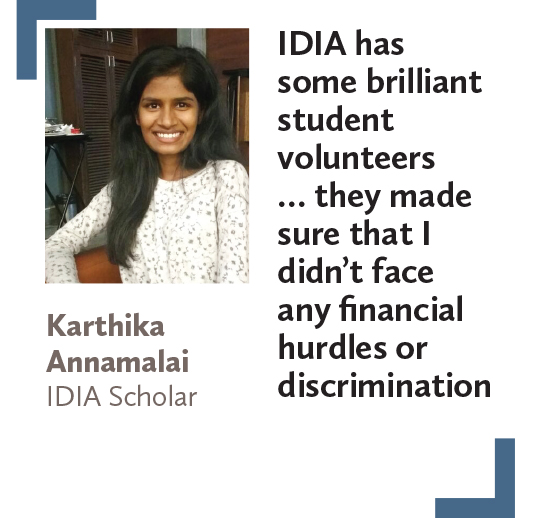 Annamalai explains that the pool of scholars that IDIA caters to is extremely diverse. While she has had the good fortune of an excellent primary education and so is fluent in English, many may not know English as well or know how to interact with different people.

“There is this class conflict and caste divide,” she says. “How people make friends is based on their class.”

None of this appears to have fazed her, for after interning twice at AZB & Partners, she is now looking forward to a career in corporate law.

“My mother was screaming with excitement when I told her I got a job offer,” says Annamalai. “Suddenly it dawned on her that my education has paid off.”