The China Securities Regulatory Commission (CSRC) said on 28 February 2014 that it will continue with reforms in mergers and acquisitions (M&A) and restructuring, and establish a parallel approval mechanism across departments. It plans not to use the review of antitrust, investment in foreign countries and foreign investment as preconditions for administrative licensing of M&A and restructuring projects.

Notice 61 [2013] issued by the CSRC provides that if the backdoor listing standards are brought to be equivalent to the IPO standards, some practical problems will arise: 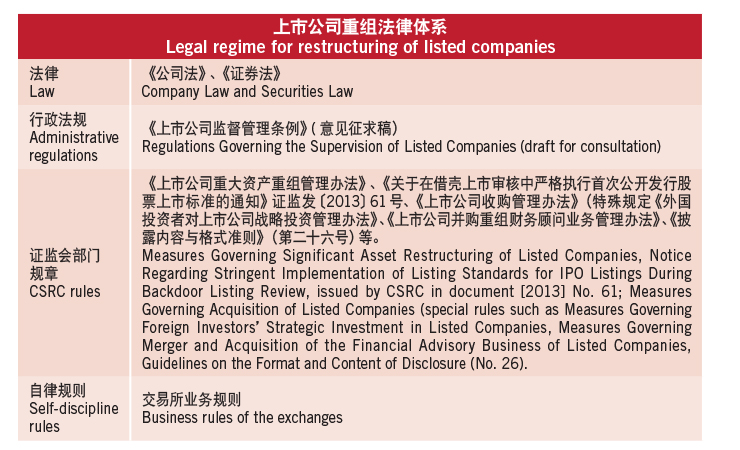 A proposed injection of assets should help a listed company improve its financial position, enhance its sustainable profitability, highlight its principal business, reinforce its risk-resistance capacity, enhance its independence, minimise related party transactions and avoid competition with its counterparts. Upon completion of the M&A deal, the listed company must have control over the injected assets.

If the assets to be injected are resources-related rights, such as land use rights and mining rights, the party must have obtained an appropriate ownership certificate and have the appropriate qualifications for carrying out development or mining. It should be noted that the assets or business involved in the deal are subject to a contract, an agreement or related arrangements such as franchise rights or business licence for a special industry. It should also be noted that no allocated land can be used for capital contribution.

If capital contribution is made in terms of the equity of a company, the company should ensure the capital contribution is true, or does not affect its legal existence. It should be noted that the business, assets, finance, personnel and office of the listed company are independent upon completion of the restructuring to avoid competition with counterparts, reduce related-party transactions and avoid the controlling shareholder(s) from encroaching upon the interests of the listed company after the reorganisation. The assets to be injected should have independent intellectual property rights, including patents, trademarks as well as R&D.

An asset assessment agency will assess the assets to be injected by means of a valuation method based on projected future earnings, such as present earning value method and hypothetical development method, and use the assessment findings as the reference base for pricing. Within three years of completion of a major asset restructuring, the listed company is required to disclose separately in the annual report the differences between the actual amount of earnings of the underlying assets and the amount of profit forecast in the assessment report. An accounting firm will then provide a special audit opinion on the disclosure.

The price of shares issued by a listed company must not be lower than the average price of the shares of the company 20 trading days prior to the announcement of a board resolution on the issuance of shares to buy assets. This is the calculation formula: average trading price = total stock trading amount/total stock trading volume 20 trading days prior to the announcement of the resolution. If a specific target subscribes for the shares of a listed company in cash or with assets in a non-public offering, and if the listed company buys the assets from the specific target with the proceeds from the same non-public offering, this will be deemed as the listed company issuing shares to buy the assets.

The specific target which subscribes for the shares of the listed company with assets is not permitted to transfer the shares within 12 months from the date of conclusion of the share issue. The shares are not to be transferred within 36 months if:

Jonathan Sun is a partner at Zhong Yin Law Firm