Sitting at the Gurgaon office of the 240-lawyer, five-office law firm that he has created over the past two decades, Jyoti Sagar, founder partner of J Sagar Associates, says: “We will chug on this year because of work that is in the pipeline, but the next six months are very critical.” 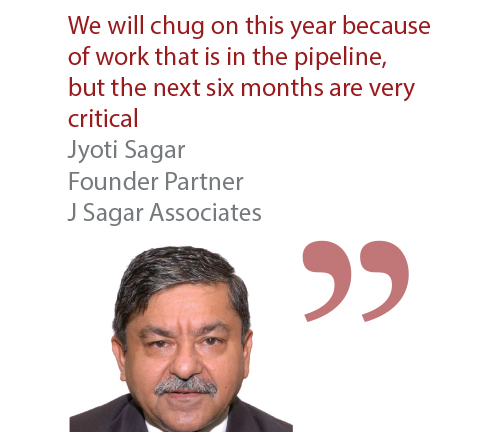 Despite the slowing of the Indian economy, signs of an impending drought, and talk of foreign direct investment dwindling, Sagar is among the few who say that these are tough times for India’s corporate lawyers.

Most report it is business as usual, even though some things may have changed. “Today we are very busy, but we are not closing deals that much,” says Mohit Saraf, senior partner at Luthra & Luthra. Saraf adds that as a result of the downturn the work that is coming their way requires “very senior level attention” and as a result “associates are less busy, partners are more busy … the more senior you get in the firm the busier you are”.

“The froth has gone out of the market,” remarks Feroz Dubash, a Mumbai-based partner at Talwar Thakore & Associates.

Lucrative capital market deals, which require armies of lawyers working behind the scenes, have dried up. Although firms report that their capital markets teams have been redeployed to M&A, private equity and other practice areas, there is talk that lay-offs may be inevitable at the larger law firms if the economy continues the way it is.

Shardul Shroff, a managing partner at Amarchand Mangaldas, India’s largest law firm, dismisses such an eventuality as impossible in India: “I don’t think an American kind of situation for retrenching lawyers in firms can happen in India because it is too human a country. You just don’t tell people to go home and sit. You don’t bench lawyers in India.”

But the centre has shifted. India’s larger law firms are dealing with the twin challenges of dealing with clients from outside their existing networks, and keeping at bay the many mid-size firms that are snapping at their heels.

“India is not growing, Bharat is,” says Abhijit Joshi, Mumbai-based senior partner and CEO of AZB & Partners, referring to the large number of mid-size companies that populate the hinterlands of India and continue to flourish despite the downturn. He adds that AZB & Partners does a lot of work for mid-market companies, which may be a price-sensitive market but is willing to pay for expert legal advice.

Are international law firms taking the right approach as they put pressure on the government to let them in?

Many corporate lawyers across India are open to the idea of international law firms being allowed in, but few expect the market to open anytime soon.

“The entry of foreign law firms will infuse more professionalism into the legal market,” says Bhumesh Verma, a partner at Paras Kuhad & Associates in Delhi.

Sidhartha Srivastava, a partner at DH Law Associates in Mumbai, believes that foreign firms may pose a threat only to the big Indian law firms. “The government should allow foreign law firms to enter,” says Srivastava.

There is no sign that the government plans to act on this soon.

Several lawyers, including Ranji Dua, managing partner of Dua Associates, point out that international law firms are knocking on the doors of the Indian market in part because revenue generation has slowed in Europe and North America.

The power of numbers

International law firms continue to argue that they should be allowed to set up offices in India. A recent survey of executives and general counsel from India’s largest companies and lawyers from India’s top law firms, commissioned by Allen & Overy and carried out by YouGov, an international market research company, shows that 96% of respondents feel that the Indian legal market should be fully or partly liberalized.

So far, international law firms have only asked that they be allowed in to practise foreign law. But in doing so are they taking the right approach?

Shardul Shroff, joint managing partner of Amarchand Mangaldas, believes that while the opening of the Indian legal market is inevitable, more needs to be done to develop the market.

Pointing out that a domestic market cannot be opened in a manner that destroys it, Shroff says: “You have to calibrate your entry inwards. That’s not happened. And that nobody is even talking about it. What does a foreign firm say – open your market, I want to enter! But it’s not introspecting and saying that you feel that the market entry is difficult – let us address those issues which affect Indian lawyers.”

“Get the issues which are haunting domestic lawyers addressed first, create that environment which is optimal, and then by all means, have open competition,” he adds.

“As lawyers we should debate and discuss and convince the other side,” says Pankaj Soni, a partner at Remfry & Sagar, who suggests that the current environment may not be appropriate for international law firms to enter.

Others see advantages in opening the market now.

Asked if there would be more career opportunities for Indian lawyers if foreign law firms were allowed “to establish offices in India and merge with Indian law firms to practise both international law and, through Indian qualified lawyers, Indian law in the corporate field,” 89% of respondents in the Allen & Overy survey said there would be.

In addition, when asked if competition from foreign law firms would improve pay and work conditions for lawyers in Indian law firms, 80% believed it would.

With no sign of a change in legislation, the legal fraternity both inside and outside India will need to wait for the Supreme Court’s ruling in an appeal in the Balaji case filed by the Bar Council of India for any clarity on the issue.

In this case, a two-judge bench of Madras High Court ruled that foreign law firms may “visit India for a temporary period on a fly in and fly out basis” to advise their clients on foreign law. It also ruled that “foreign lawyers cannot be debarred to come to India and conduct arbitration proceedings in respect of disputes arising out of a contract relating to international commercial arbitration”.

Earlier, in the Lawyers Collective case in 2009, Bombay High Court had ruled that the Reserve Bank of India should not issue licences to foreign law firms to open liaison offices.

An interim order in the Balaji appeal, issued by the Supreme Court on 4 July, says that the Reserve Bank of India “shall not grant any permission to the foreign law firms to open liaison offices in India”. It also clarifies that practising the profession of law under section 29 of the Advocates Act, 1961, covers “litigious matters as well as non-litigious matters”.

The interim order has left lawyers pondering the legality of the widespread practice of foreign lawyers taking part in arbitrations in India. A lengthy arbitration in a dispute between Essar Oil and United India Insurance over India’s first advance loss of profit insurance claim provides a case in point.

All three arbitrators deciding the claim are lawyers from the UK, and both United India and its London-based reinsurers used UK lawyers. The hearings in the arbitration took place at the Trident Hotel in Mumbai.

It is hoped that the Supreme Court’s final ruling in the Balaji appeal will provide clarity on whether using international counsel in this manner will continue to be legal and on other issues related to the presence of foreign lawyers and law firms in India.