Our publications
Home In focus HKIAC and arbitration in Asia: Japan, Singapore, India and Hong Kong

The battle for global supremacy in an industry of conflict avoidance is opening new fronts in Asia, where a fierce duel is ongoing, writes Paul Campbell

Hong Kong International Arbitration Centre’s (HKIAC) newly appointed secretary-general Sarah Grimmer will have to hit the ground running – and even pick up the pace – if she hopes to hold on to the gains achieved by her predecessor. Chiann Bao in September took up a new role as regional counsel at the Hong Kong office of Skadden Arps Slate Meagher & Flom, after a six-year stint that saw the HKIAC emerge as the most-improved dispute resolution body worldwide, according to the most recent annual survey by Queen Mary University of London. The urgency of her task is not lost on the new secretary-general. “My main objectives for the first year in the role are to: (1) ensure the continued provision of high quality service by the HKIAC’s secretariat; (2) build on groundwork that has already been laid, particularly as regards the HKIAC’s tribunal secretary services and accreditation courses; (3) identify new initiatives that meet a need in the legal and/or business community; and (4) promote the HKIAC’s rules and services in relevant regions and industries,” says Grimmer.

There’s no time for complacency. By some measures, Singapore International Arbitration Centre (SIAC) has a case to claim that it’s now Asia’s top dog, with faster growth and bigger, more lucrative cases. And while the SIAC had to settle for silver this time around, Singapore as an arbitral seat stole the gold ahead of its older and more established neighbour. Snapping at the heels of both is a pack of regional rivals, all chasing a slice of an increasingly competitive market. Still, Grimmer points to the HKIAC being ranked first worldwide for location, value for money, IT services and helpfulness of staff in the GAR Hearing Centres Survey, 2016.

Rutger Metsch, a White & Case research fellow in international arbitration at Queen Mary, and one of the survey’s authors, says the HKIAC and the SIAC are well regarded “because of the very clear pro-arbitration stance of their courts and legislators, and their ability to respond to, or stimulate, change”.

That openness to change and innovation is likely to become an even more important ingredient for success. While a clear majority of respondents said arbitration was their preferred method of resolving international commercial disputes – 56% as a standalone solution; 90% when combined with other forms of dispute resolution – even arbitration’s biggest fans see a huge need for improvements.

“If you talk to any user of the arbitration system, their first and last words are ‘cost, cost, cost’,” says Paul Aston, a partner at Holman Fenwick Willan in Singapore. “Arbitrators have a duty to think about how to run an arbitration in the most cost-effective and efficient manner.”

Ironically, the actual cost of the arbitrators and the administration of the tribunal make up quite a small proportion of the total expense, he adds. “It’s the legal and expert costs that go through the roof,” and there are ways that these can be controlled, such as through firm control of the procedures, agreeing to clear limits on such costly items as discovery and testimony by expert witnesses, and enforcing deadlines. “Arbitrators have the power to punish people whose bad behaviour means the costs are ratcheted up, but they don’t, because they’re scared.”

“Due-process paranoia”, as the authors of the Queen Mary report termed it – the reluctance of tribunals to make tough decisions because of the fear it would leave any award open to a challenge on the grounds that a party had been denied the chance to make their case fully. The issue was repeatedly raised in the answers of the survey’s 763 respondents, and in nearly all of the 105 in-depth interviews.

Kevin Nash, deputy registrar and centre director at the SIAC, says that while there are a variety of methods to determine costs across the institutions, “it is ultimately the experience, efficiency and ethos of an institution” that ensure costs are kept in check.

“In addition to a competitive cost structure, the SIAC Rules 2016 introduce a number of market-leading innovations to save time and costs, including a new procedure for the early dismissal of claims and defences, new provisions to deal with multi-party and multi-contract disputes, and further refinements to the SIAC’s popular emergency arbitrator and expedited arbitration procedures,” he says.

Joe Liu, managing counsel with the HKIAC, says the centre has introduced several mechanisms to control costs. “One of the most effective and innovative measures taken by the HKIAC is to allow parties to choose how to pay their arbitrators, i.e., by hourly rates [capped at HK$6,500 (US$840) per hour] or based on the amount in dispute,” he says. Parties can first assess the value and complexity of their dispute and choose the best cost-saving method to pay the arbitral tribunal.

Liu adds that the HKIAC is also assisted by an arbitration feedback system introduced in July last year, which allows users to evaluate the conduct of their arbitral proceedings and the performance of their arbitrators. The HKIAC draws on users’ feedback to appoint arbitrators who are able to conduct proceedings without delays.

Kim Rooney, a barrister, international arbitrator and alternate member of the International Chamber of Commerce (ICC) International Court of Arbitration, observes: “Some of the features that we used to promote it early in its history – such as it was flexible and it was fast; it didn’t have appeal mechanisms; it was cheaper – some of them have, over time, been undermined a bit. Arbitration was originally described as an alternative dispute resolution mechanism, but it’s now ‘mainstream dispute resolution’ for cross-border disputes in Asia.”

On the plus side, though, are the fundamental advantages that made ADR an attractive option in the first place: the ability to enforce awards; the perceived neutrality of tribunals, and the flexibility to find a set of rules that suits both parties.

Lacking a framework of bilateral treaties providing for the reciprocal recognition and enforcement of judgments – such as exists between rich nations in the West – Asian governments have recognized the need to support the growth of arbitration and other dispute resolution approaches outside the court system.

Japan, for example, has no bilateral treaties. It is a signatory to the 1958 Convention on the Recognition and Enforcement of Foreign Arbitral Awards, more commonly known as the New York Convention, along with more than 150 other jurisdictions around the world. The so-called Model Law provides a blueprint for legislation that ensures an increasingly global landscape in which parties can operate on common ground.

“Arbitration in Japan itself is barely developing at all, certainly not quickly. What is developing is the use of arbitration ex-Japan by Japanese companies,” says Peter Godwin, managing partner in Japan and head of the dispute resolution practice at Herbert Smith Freehills. “This is largely a consequence of their cross-border investments and the suitability of arbitration in ensuring a neutral safe venue for dispute resolution.” 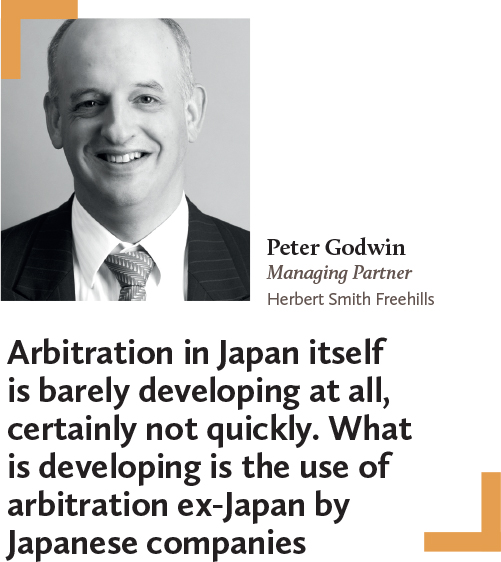 Cross-border takeovers and investments involving Asian entities have surged to more than US$900 billion until August this year, up from US$420 billion just four years ago, according to Bloomberg data. Asians are increasingly the ones doing the buying – US$283 billion in outbound deals this year, versus US$110 billion in the same period of 2012. And intra-Asia trade and investment is growing fast, too. The economic volatility of recent years is adding a further boost to the market as tough times inevitably sour relationships forged when the outlook was rosy. It is these factors that help explain Asia’s growing arbitration presence, as well as the rise of Hong Kong and Singapore to become the third and fourth-ranked seats globally.

“Just as the shift in economic activity changes from the Atlantic to the Pacific, you will see that naturally they’ll become number one and number two, because all of the economic activity takes place between parties in Asia,” says Davyd Wong, in-house counsel at KPMG, which was commissioned by Hong Kong’s government to look at ways to enhance the city’s role as an arbitration hub. “It makes less and less sense to have the arbitration in London.” 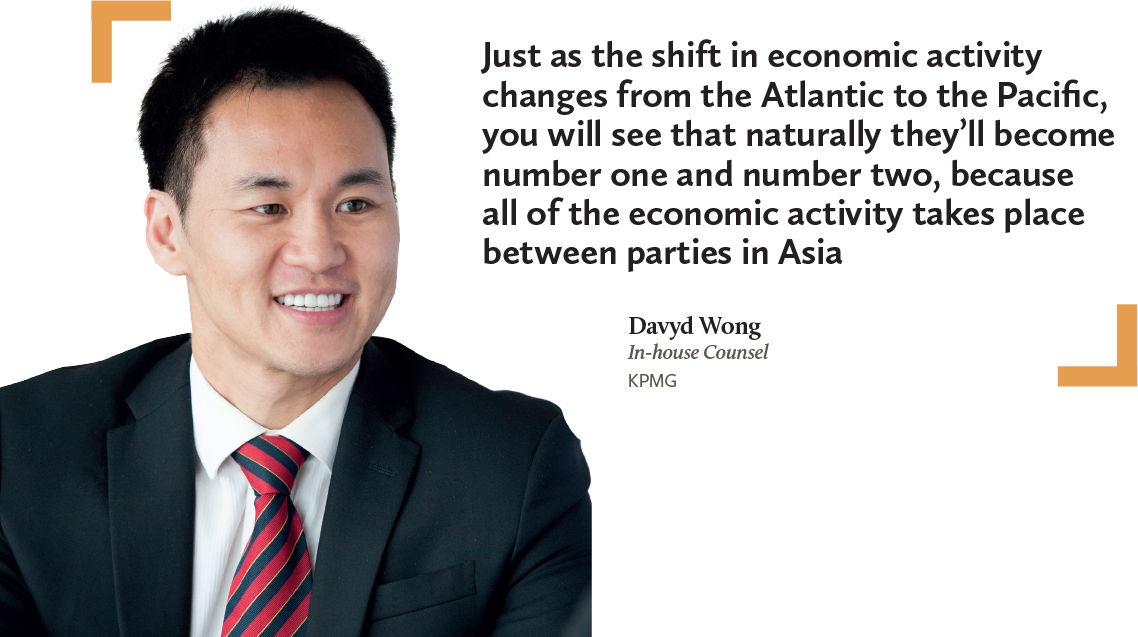 Grimmer believes the HKIAC holds some advantages. “I would mention two points,” she says. “First, through its 2013 Administered Arbitration Rules, the HKIAC offers one of the most modern and comprehensive sets of rules on the market [nominated by GAR as one of the best developments of 2013], and its international secretariat now has significant experience administering those rules. Second, Hong Kong is widely regarded as the natural choice of seat for arbitrations between Chinese and non-Chinese parties. Every year the HKIAC administers a high volume of disputes involving Chinese parties. Research shows that awards made in Hong Kong or issued by the HKIAC enjoy a stronger record of enforcement in China, a record that awards made in other jurisdictions have not been able to match.”

By Abhishek Malhotra and Bagmisikha Puhan, TMT Law Practice
The scandal that rocked the top branch of India's NSE
Global M&A activity has climbed sharply since last year, creating opportunities in emerging markets like India and the Philippines, which have relaxed and liberalised their investment policies