With China’s real estate industry in crisis, Michael Zhang, executive director of Jinmao Capital’s risk & compliance department, explores the risks faced by asset managers with their investment strategies for the sector, and offers advice on mitigating these risks

China’s asset management industry has developed at a blistering pace in the past decade. By 2021, the asset management market had reached RMB133.7 trillion (USD19.7 trillion) and is still growing rapidly. In the early days of the industry, investors generally believed in and demanded guaranteed principal and guaranteed minimum returns, and subsequently flocked to financing entities with renowned reputations.

However, with China’s industrial transformation, in particular the downward spiral of the real estate industry, the backbone of the economy, and the constant occurrence of risk events, investors have been left at a loss and asset management institutions have exhausted themselves disposing of risky projects.

Since then, “faith in guaranteed principal and guaranteed returns”, which relies on the entity credit of financial institutions, completely collapsed, leaving investors flailing helplessly, perplexed and wondering whether there could be an alternative for the guaranteed return model.

When liquidity is abundant and the economy is growing rapidly, a “halo entity” could, even if the odd project here and there showed a loss, still protect investors by moving things around. However, once there is a liquidity crunch, economic growth slows and industrial prosperity slides, everything is carried along, and promises of guaranteed principal and guaranteed returns bounce like a rubber cheque, leaving investors high and dry. Based on publicly available information, the author has collated a timeline of the financial crises of distressed entities set out on “real estate industry” and “non-real estate industry”.

Refocus on core assets. As the industry declines and conventional risk control measures such as the credit of the financing entity become increasingly weak, investors are compelled to re-examine the long-overlooked quality of the underlying assets.

In an era led by the stock economy, population flows are showing a concentration trend, whereas residents’ incomes are showing a dispersal trend. The values of core assets are increasing even faster, whereas marginal assets are overabundant or even constantly depreciating in value. Under such logic, investing in marginal assets itself is risky, such that the focus should be trained on buying core assets. However, is this the new talisman?

Accordingly, even if an investor selects a financing entity based on its core assets, the investor remains unable to avert the risk that such entity will be consolidated into a bankruptcy procedure, thereby harming the investor’s investment returns.

Notwithstanding the fact that certain local courts have issued their criteria for the application of substantive consolidation and reorganisation with a view to better clarifying the boundaries of application, bankruptcy cases are intricate and complex, and the interests involved are convoluted and difficult to clarify. The bankruptcy consolidation and reorganisation rules have, in several “star” cases, repeatedly challenged investors’ new investment strategy of switching to core assets. 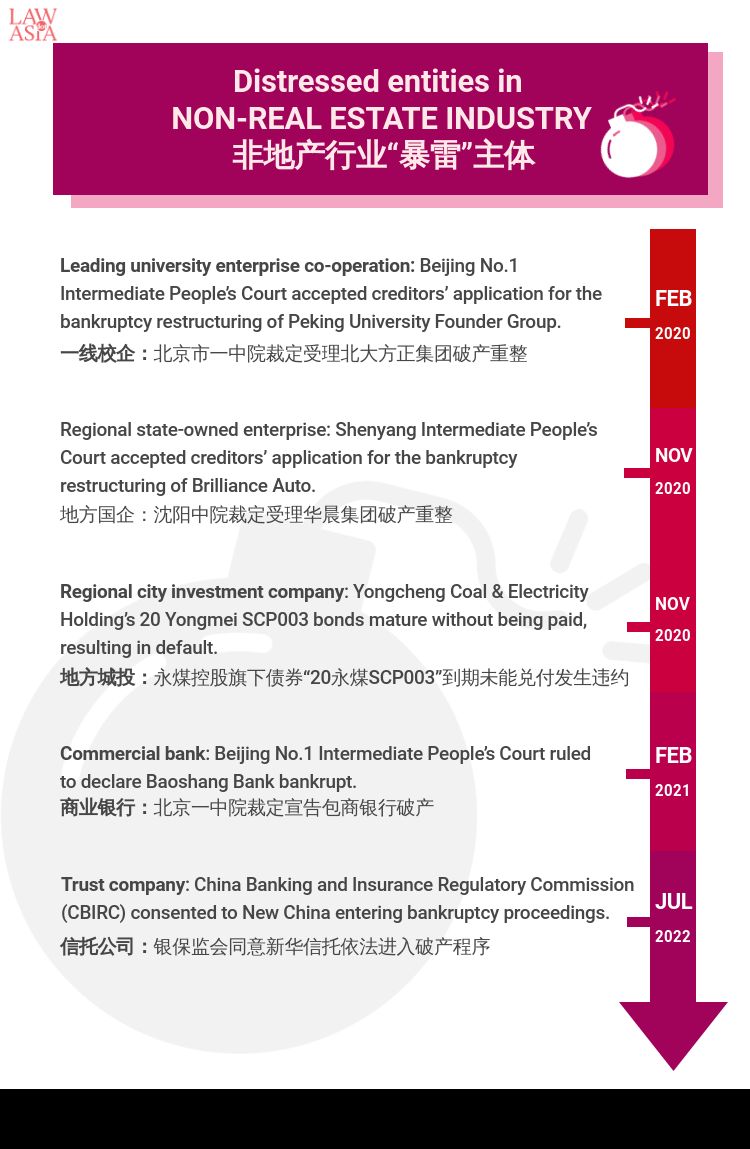 In view of this, it would seem that investment in core assets still cannot address the above-mentioned risks. With this, have the investment logic and risk control criteria, which are based on considering target projects as core, also been subverted?

Under the transaction plan, Everbright Capital Corporation issued a “Difference Make-up Letter” to China Merchants Bank to underwrite the proceeds from withdrawal from the fund. Subsequently, MPS went bankrupt, the fund suffered serious losses, withdrawal therefrom became impossible and Everbright Capital failed to perform its above-mentioned obligation to make up the difference, giving rise to litigation.

The court in the case rendered a judgment ordering Everbright Capital to bear an obligation of paying the investment principal and returns (about RMB3.1 billion) to China Merchants Bank. The case in question was included by the Supreme People’s Court as one of the 10 major commercial cases heard by courts nationwide in 2021, having a far-reaching impact.

In this case, Everbright Capital was neither the custodian of the asset management product nor a licensed financial institution. In its capacity as an inferior limited partner (LP), it promised compensation if the investment failed to pay off to the prior LP of the funds managed by its wholly owned subsidiary, Everbright Jinhui, essentially offering such prior LP guaranteed principal and returns.

Notwithstanding the fact that the adjudication thinking in the above-mentioned minutes and relevant judicial decisions reflects that an undertaking of guaranteed principal and guaranteed minimum returns given by the custodian of an asset management product (particularly a financial institution) to the beneficiary is invalid, there is room for fallback undertakings in other situations (such as inferior class investors against priority class investors, third parties not part of the transaction against investors, etc.) to be found legally valid.

(2) Ascertaining the true gearing ratio of the investment target. Investors that are dazzled by a “halo entity” tend to ignore its overall solvency, not seeing the forest for the trees. On the one hand, they only examine the basic financial reports, but ignore the issue of off-balance sheet liabilities. The common off-balance-sheet financing methods of large groups include debt investment carried out in the guise of equity investment, non-consolidated enterprise financing, advances from upstream and downstream enterprises, etc. They can hide off-balance-sheet liabilities through various financial tricks to obtain beautiful financial data. On the other hand, investors only examine the overall debt situation and take short-term solvency lightly.

Large groups will generally be involved in multiple projects simultaneously, and if several projects make losses or experience refinancing problems in the same fiscal period, they will experience a liquidity crunch. At such time, the group itself may not have a high debt ratio but it may already be on a mined road. 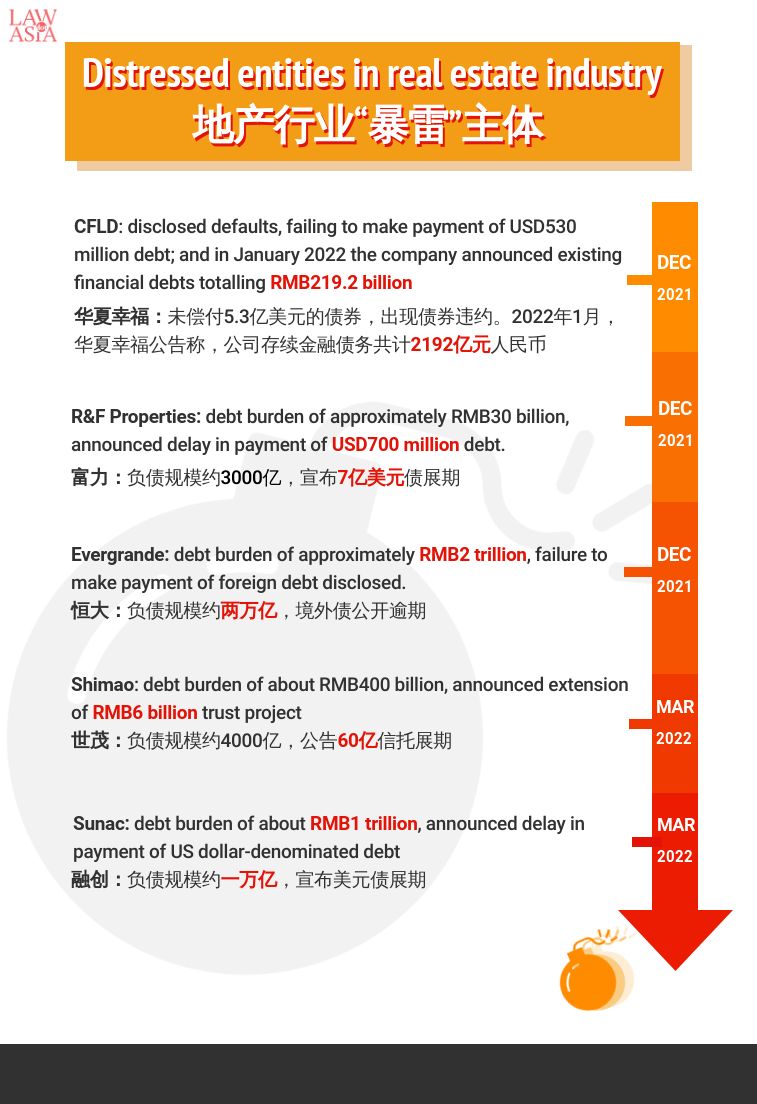 Accordingly, even if a “halo entity” has a strong background, and the quality of individual projects it proposes to invest in is excellent, investors nevertheless need to look closely at its overall debt situation and analyse its solvency, although the same can be extremely difficult in practice.

(3) Implementation of “three independents” control and establishment of firewalls to isolate entities. Usually, in a real estate project plan, the real estate group (parent company) is responsible for securing the land, and a subsidiary, as the project company, is responsible for the external financing, with a great deal of transactions and appropriations occurring between the parent and subsidiary. If the parent company experiences a debt problem and the independent legal personality of the subsidiary comes into question, this may lead to the application of substantive consolidation and reorganisation.

(4) Going with the flow and paying close attention to the policy guidance of the central government to guide the direction of investment decisions. At a meeting held on 29 April 2022, the Political Bureau of the Central Committee of the Communist Party of China asserted that, “we must stick to the positioning that housing is for living in and not for speculation, support local areas in improving their real estate policies in light of their local realities, support rigid and improved housing demand, optimise oversight over proceeds derived from the pre-sale of commercially developed housing and promote the steady and healthy development of the real estate market”.

Recently, the White List of the First Batch of Stable Delivery Property Enterprises, widely circulating in the industry, lists eight real estate companies considered as those carefully selected by the government, and provides investors positive reference for selecting partners and judging projects.