The project involved three subject matters, i.e. the issuer (the listed company), the counterparty (the holding group) and the underlying assets (target companies A and B). The reorganisation process was so complex that seven intermediaries were engaged to advise on the project. It also needed to comply with all the rules and requirements for various aspects, like the restructuring and acquisition of a listed company, as well as the supervision of state-owned assets. The overall sequence of events in this project in the legal context can be summarised as follows: one main line and two auxiliary lines.

The project started with a main line that focused on the issue of shares by the listed company to buy assets (i.e. a major reorganisation of assets). Supporting the main line was the Major Asset Restructuring Measures, under which an issuer is required to engage an independent financial adviser, accountants and lawyers. The financial adviser is responsible for the preparation of various application documents such as a restructuring report, while the accountants will issue various reports like an audit report and a profit forecast verification report, and the lawyers will provide a legal opinion. 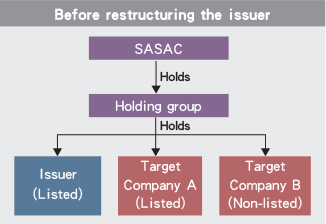 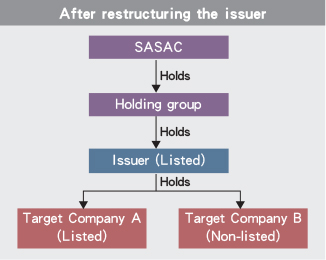 In this project, the holding group increased its stake in the issuer by subscribing for the shares in the issuer with the underlying assets in a private placement, while the issuer increased its shareholding in target company A by acquiring the underlying assets (target companies A and B). This resulted in the percentage of shareholding held by the holding group and the issuer in the listed company exceeding 30%, or continuing to increase on top of that 30%, thereby triggering an obligation to make an offer for acquisition. They were required to apply to the China Securities Regulatory Commission for exemption from the obligation.

Since the holding group, the issuer and the target companies were state-owned holding companies, the pricing of the underlying assets, changes in the state-owned shareholding and major asset restructuring were required to be in compliance with relevant laws and regulations for the supervision of state-owned assets.

Pricing of underlying assets: since target company A was a state-controlled listed company, pursuant to the Management of Transfer by State-owned Shareholders of Their Shares in Listed Companies Interim Measures, the price for the transfer of the shares in a listed company as agreed by state-owned shareholders should be determined by calculating the average value of the daily weighted average price over 30 trading days prior to the date of the listed company’s announcement regarding the transfer of the shares.

Target company B is a non-listed company, so pursuant to the Management of the Evaluation of Enterprises’ State-owned Assets Interim Measures, the underlying assets should be evaluated prior to any changes in the percentage of the shareholding held by the state-owned shareholders of a non-listed company. Therefore, appraisers were required to conduct an evaluation of the assets of target company B and report the findings to the relevant administration for the record. The pricing should be based on these findings.

Changes in state-owned shareholding: pursuant to the Management of Transfer by State-owned Shareholders of Their Shares in Listed Companies Interim Measures, the transfer by the holdings group of its shares in target company A to the issuer was required to be reported to the State-owned Assets Supervision and Administration Commission (SASAC) for approval.

According to the Management of Transfer of State-owned Property Rights by Enterprises Interim Measures, with respect to the holdings group’s transfer of its shareholding in target company B to the issuer, the transfer of state-owned property rights should be conducted on an exchange where transferees should be called up from the public, unless approval is given by relevant authorities above the provincial level.

Li Yonggang is a partner at Concord & Partners in Beijing