These were the famous words of Goethe quoted in the opening paragraph of the recent Supreme Court judgment decriminalizing gay sex. The historic ruling was seen as correcting a long-term wrong that had heaped ignominy, and more, on the country’s LGBT community, who in Justice Indu Malhotra’s opinion was owed an apology. The celebrations that followed were loud and wholly justified. 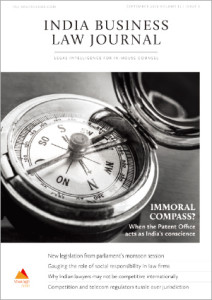 Goethe was not the only great person invoked in the ruling that signals the Supreme Court’s determination to guarantee minority rights. Others include Arthur Schopenhauer, John Stuart Mill and Shakespeare, and coming as it did a year after the court’s landmark ruling that privacy is a fundamental right, it may be assumed that the average Indian has become more tolerant of diversity. Yet, recent acts of intolerance and violence towards other minorities suggest the court may be several steps ahead of society at large.

Evidence that the Supreme Court’s transformative thinking may not be replicated elsewhere is also to be found in a recent decision of the Patent Office to refuse a patent for a sexual stimulation device, which is in essence a moral judgment involving what goes on in the bedroom. The ruling is analysed in our Cover story and raises some interesting legal questions.

The Patent Office relied on the Patents Act, 1970, which excludes immoral inventions from patentability. But is it prudent to vest the office with the authority to make determinations about morality? Does the office have the institutional competence to wade into this problematic terrain? And what are the wider implications for products manufactured by Indian and international businesses that some may deem immoral such as drugs and deadly weapons? It is critical that these matters go to court so that we have clear norms relating to what can pass for an immorality or public order exception. The bar must be set high as a low standard may contravene the Agreement on Trade-Related Aspects of Intellectual Property Rights (TRIPS).

In this month’s What’s the deal?, we report on a fight over market access in the broadcasting sector that has brought to the fore questions about the jurisdiction of regulators. As it stands there is confusion about whether companies in the broadcasting sector have to abide with antitrust rules as laid down by the sector regulator, or those stipulated by the Competition Commission of India. A ruling on the matter is awaited from the Supreme Court, and our article focuses on the story so far.

Turning the spotlight on social responsibility and sustainability, in Lending a hand we discuss the proposition that there are now increasing expectations on law firms. We detail the results of a survey of Indian law firms that found a strong emphasis on preventing discrimination at work and ensuring an inclusive work environment.

In addition, most of the law firms understand and, increasingly, value the nexus between sustainability and economic success, even if, it is limited to the people at the top. As firms become more deeply embedded in the global market, there are increasing calls to become part of a responsibility revolution so that they create value for stakeholders.

The author of this month’s Vantage point, Ojasvita Srivastava, argues that Indian law firms will find it difficult to compete with their foreign counterparts as lawyers have not been equipped with the right training. Legal education and training await a systemic change but none of this is being discussed in the very many debates about the pros and cons of opening up the legal market.

This month’s Intelligence report continues our ongoing coverage of parliamentary sessions. In this issue, we focus on the recently concluded monsoon session and the key commercial bills that were debated and passed. This includes an amendment to the Commercial Courts, Commercial Division and Commercial Appellate Division of High Courts Act, 2015, which reduces the pecuniary jurisdiction of commercial courts and commercial divisions in high courts from the existing limit of ₹10 million (US$139,000) to ₹300,000; and an amendment to the Insolvency and Bankruptcy Code, 2016, which incorporates recommendations of an expert insolvency law committee that reviewed the code earlier this year.