Our publications
Home Cover story Running with the bulls

With funds raised from ipos in india at an all-time high, it is the enthusiasm of retail investors that is fuelling the charge. Georgy Thomas reports

It was a record year – a stampeding bull market in 2021 that ran in a record INR1.1 trillion (USD15.9 billion) worth of fundraising from IPOs, with corporate lawyers quick to tell India Business Law Journal much of it was due to increased retail investor participation.

Siddhartha Sivaramakrishnan, a Singapore-based partner at McDermott, tells India Business Law Journal that trading volumes would be huge if something like the “tremendous” IPO activity in China, a lot of which is driven by retail investors, were to happen in India. “Companies could be doing IPOs every day of the year for the next several years and still not meet the demand from that segment of the population,” he says.

MARKERS OF A DEEP MARKET

Is India on its way to the long-cherished goal of deepening its equity capital markets? To answer this, we need to know what makes a deep equity capital market. According to Siddhartha: “The way that you deepen it is by widening the range of investors who participate, bringing in not just the hedge funds, but making sure the mutual funds, the domestic saving schemes, etc., are investing.” In his view, retail investors consider participation in sophisticated financial market products as a means to grow. 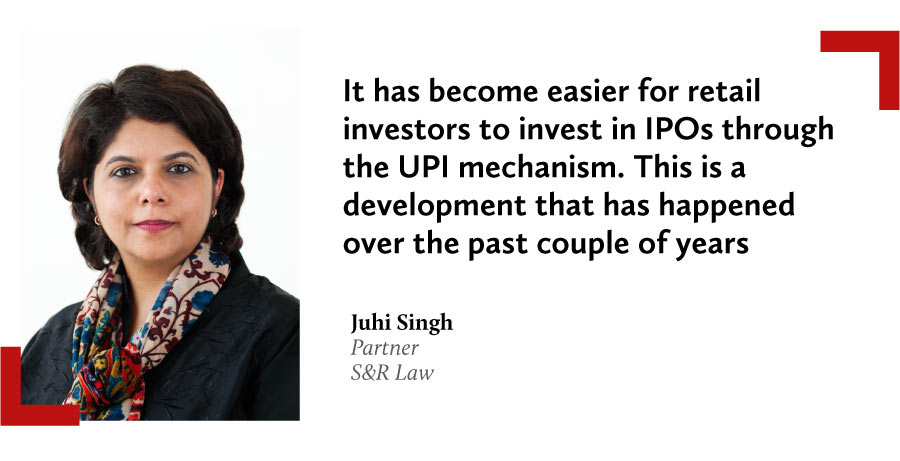 Juhi Singh, a New Delhi-based capital markets partner at S&R Associates, considers a deep market one where large players and retail investors co-exist. She lists a few factors that made the surge in retail participation possible, the first being the introduction of a unified payments interface (UPI).

“It has become easier for retail investors to invest in IPOs through the UPI mechanism,” she says. “This is a development that has happened over the past couple of years.” Second, she notes internet penetration has made it possible for retail investors to trade through smartphones using the apps created by brokers. Third is the effect of increased participation from both tier-2 and tier-3 cities, as well as the addition of millennials to the pool of investors.

The role of retail investors in last year’s record IPO fundraising was acknowledged by others as well. Prashant Gupta, a New Delhi-based partner and national practice head in capital markets at Shardul Amarchand Mangaldas & Co, notes: “Retail and HNWI [high net-worth individual] investors have been participating in IPOs at record levels, further driving the IPO market.”

Does the de minimis exemption help or hinder the CCI?
Spate of real estate defaults tests creditors’ faith in the IBC
Why the automation of compliance processes is the need of the hour