Continuing our regular coverage of India’s parliamentary sessions, Mandira Kala assesses the performance of the Lok Sabha in the past five years compared with the two previous terms

The 2019 budget session of India’s parliament concluded in February, marking the end of the five-year term of the 16th Lok Sabha. In this term, the Lok Sabha, the lower house of the bicameral legislature, witnessed a single-party majority for the first time since 1989.

This article examines the productivity of the two houses of the parliament during the past five years, and the time spent by them on core functions such as making laws, holding the government accountable, and discussing important issues. It also discusses the legislative businesses transacted, the role of parliamentary committees, and the making of laws through ordinances, overlooking the role of parliament as an institution.

The Lok Sabha worked for the second-lowest number of hours when compared with other full-term Lok Sabhas since 1952. It lost 16% of its scheduled time to disruptions, which is better than the previous Lok Sabha (37%) but worse than the 14th Lok Sabha (13%).

While both houses of parliament performed similarly during the previous two terms, the Rajya Sabha’s (upper house) productivity was significantly less this time. It lost 36% of its scheduled time to disruptions, higher than the Lok Sabha’s 16%. This is also reflected in the functioning of the question hour, the time reserved for the government’s replies to questions asked by members. Question hour worked for 41% of its scheduled time in the Rajya Sabha, whereas the figure for the Lok Sabha was higher at 67%. 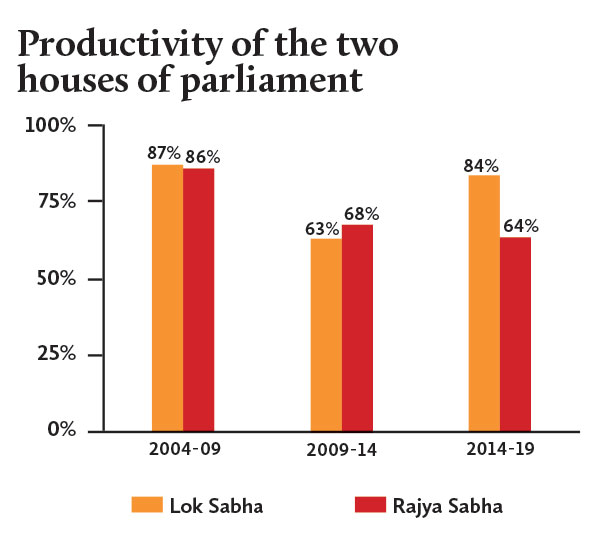 Data on the time spent by both the houses on their various functions suggest that the Lok Sabha spent a larger proportion of its time (29%) on legislative business, compared with the Rajya Sabha (23%). The Rajya Sabha spent more of its time (44%) on non-legislative business, which includes discussion on issues of public importance raised by the opposition, and other urgent matters raised by members in the house. For the Lok Sabha, this figure was lower at 34%.

About 43% of the bills passed during the term of the 16th Lok Sabha related to the sectors of finance, and law and justice. During this term, the parliament passed many bills dealing with complex issues.

These include laws related to the Goods and Services Tax Act, the Insolvency and Bankruptcy Code, the Real Estate (Regulation and Development) Act and the Aadhaar Act. Further, it passed five constitutional amendment bills and introduced another one, which is pending for approval in the Rajya Sabha. The constitution was amended for incorporation of provisions related to GST, the National Commission on Backward Classes, and the National Judicial Appointment Commission, among others.

At the end of Lok Sabha’s term, bills introduced in the Rajya Sabha but not yet passed by that house carry on to the next term of the Lok Sabha. There are 33 such bills in the Rajya Sabha, of which 10 have been introduced in this term. All other bills pending in both the houses lapse. As a result, 46 bills will lapse at the end of the 16th Lok Sabha. The bills that will lapse include the Consumer Protection Bill, 2018, the Code on Wages, 2017, and the Motor Vehicles (Amendment) Bill, 2016.

Parliamentary committees allow for detailed scrutiny of legislation, provide a forum for feedback from various stakeholders, and act as a consensus building platform across political parties. These consultations help in strengthening the provisions of the bills and allow for detailed consideration of legislative issues.

During the 16th Lok Sabha, the Financial Regulation and Deposit Insurance Bill, 2017, was withdrawn on the recommendation of a joint parliamentary committee constituted to examine the bill. The bill provided for the creation of a framework for resolving bankruptcy in financial companies (such as banks and insurance companies). The committee made its recommendations following apprehension raised by stakeholders about several provisions of the bill, including the use of a bail-in instrument to resolve a failing bank, and the application of the framework to public sector banks.

As a majority of the bills were not referred to parliamentary committees, these bills were enacted without adequate scrutiny, especially in the case of bills dealing with complex subjects. For example, the Constitution (124th Amendment) Bill, 2019, which gave up to 10% reservation to economically weaker sections in educational institutions and employment, was listed for introduction during the house proceedings and was passed on the same day, giving members little time to scrutinize it. The bill was passed in the upper house the next day, after a motion to send the bill to a committee was defeated. 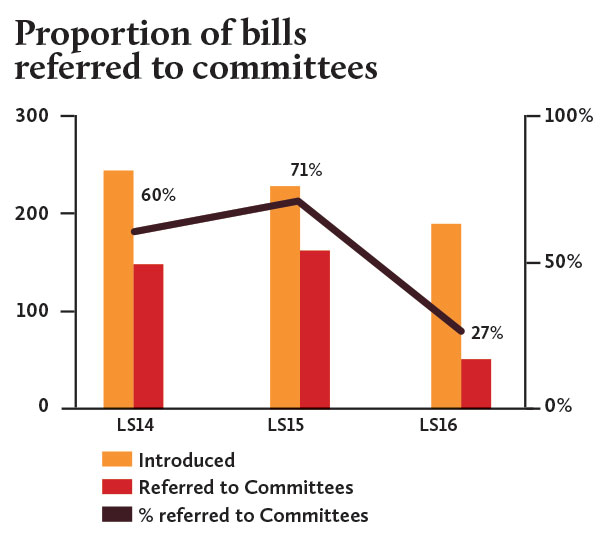 Ordinances can be promulgated by the president, when the parliament is not in session, to address legislative gaps that require immediate action. An ordinance ceases to be in force unless the parliament approves it within six weeks from the start of its next session.

Ordinances promulgated by the executive, though temporary in nature, undermine the role of the parliament as a legislative institution. Such a practice does not exist in other democracies such as the UK, the US, Australia and Canada.

Ten ordinances have been promulgated since the conclusion of the last parliament session. Of these, three were re-promulgated after they failed to get approval in the two previous sessions. These ordinances were related to the practice of triple talaq (divorce), and amendments to the Companies Act, 2013, and the Indian Medical Council Act, 1956. In all, 55 ordinances were promulgated in the past five years.

MANDIRA KALA is head of research at PRS Legislative Research, a think-tank that tracks the functioning of the Indian parliament and works with members of the Lok Sabha and Rajya Sabha and members of the legislative assemblies of various states.