I RECENTLY had the pleasure to meet a husband and wife couple, Barry Pang and Anne Pang Pi-Yao, who are masters of the martial art of Wing Chun. Together, they became pioneers of this style of Chinese Kung Fu in Australia when Barry established the Barry Pang Kung Fu School almost 50 years ago, in 1974. A discussion with Barry and Anne about Wing Chun gave me the idea of examining the Wing Chun Rules of Conduct, and the extent to which they resonate with rules of conduct in the legal profession.

The Chinese term “Kung Fu”, or gongfu, consists of two characters: gong, meaning “achievement” or “skill”, and fu, meaning “man” or “master”. Although this term is most often used to refer to the martial art, it is also used to refer generally to any discipline or art that is mastered through effort, skill and practice. For example, the term also refers to the skill of making and serving tea, known as gongfu tea.

The martial art of Wing Chun is said to have originated when a nun called Wu Mei (Ng Mui in Cantonese) fled to Yunnan from the destruction of Shaolin Temple by Manchu forces in the late 17th or early 18th century. In Yunnan, the nun taught her style of Chinese Kung Fu to a young girl called Yan Yong Chun (Yim Wing Chun in Cantonese) to defend herself against a warlord trying to force her into marriage. The style subsequently came to be known by the given name of the young girl, Wing Chun.

The Wing Chun style of Kung Fu utilises quick, close-range arm movements to defend against attack, which are practised through an exercise called chi shou (chi sao in Cantonese). The name of this exercise literally means “sticking hands”. In addition to the arm movements, Wing Chun employs the lower body and legs to defeat opponents and redirect or deflect their strength. As Barry Pang explains:

“In its inception, most Wing Chun practitioners were very small, so redirecting an opponent’s strength was vital. If you go back to the first two practitioners, they were women – so being small in stature, they needed to make their techniques work against much bigger people. Wing Chun is like the Japanese martial art of Aikido in its philosophy of moving the body of the line of attack and redirecting their forces.”

Anne Pang also notes the importance of the mental aspect of Wing Chun: 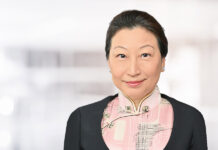