Being a fast mover has always been the Chinese outbound investor’s preferred strategy for market entry abroad. But now they are being counselled to slow down and consider the long game when developing IP strategies that will stand the test of time. Vanessa Ip reports

China has made significant strides in the past few decades to improve and modernize its intellectual property (IP) regime. Earlier this year, the nation passed its new Foreign Investment Law, which purports to create a more level playing field for foreign investment in the country, including assurances in relation to IP protection for foreign investors. And yet the country is still to shake its reputation in the international community as being one of the world’s leading IP offenders.

While other parts of the world remain focused on China’s IP theft, its outbound investors have been typically indifferent when it comes to protection of their own IP. This is due in part to China’s relatively young IP regime, and limited exposure to IP issues, but practitioners say that Chinese companies venturing overseas are becoming increasingly aware of the need to protect their IP in today’s competitive global economy.

Johnson Li, a senior partner at Wanhuida Peksung in Beijing, says IP is increasingly important for Chinese companies in both competition and co-operation with foreign peers. “We do see more and more Chinese companies that are willing to protect, or at least try to protect, their IP overseas with the fast development of the Chinese economy,” he says. “The increasing number of patent and trademark applications from China and news on litigations initiated by Chinese companies is the best indicator that Chinese investors are paying more attention to IP protection overseas.” 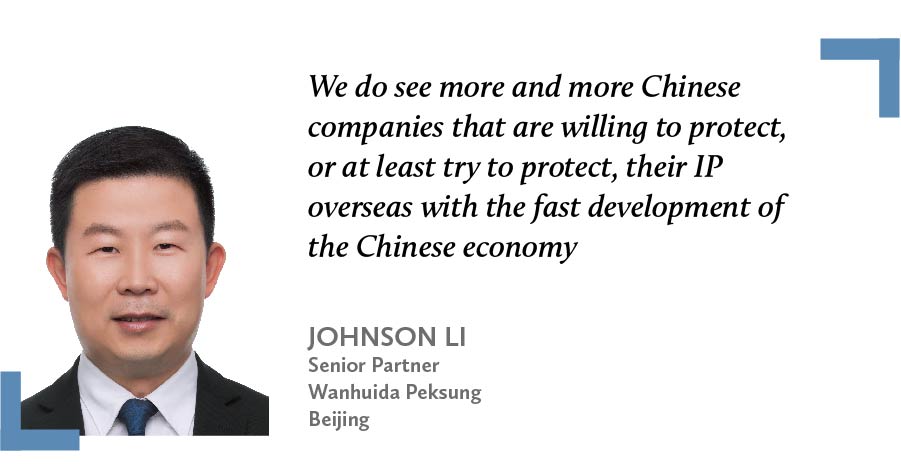 Although the tide is turning, Cai Peng, a partner at Zhong Lun Law Firm in Beijing, says that overseas Chinese investors still struggle at times with insufficient confidence and a lack of active IP rights protection strategies.

Annie Tsoi, a partner at Wilkinson & Grist in Hong Kong, says that Chinese overseas investors are also commonly held back by a general lack of knowledge and experience on local IP laws, practices and landscape. She says that insufficient understanding of the local market reality can tend to affect the commercial risks, apart from legal risk considerations.