China’s rise as a global investor has had a massive impact on countries around the world as they seek to diversify their sources of foreign direct investment (FDI), especially in critical, capital-starved sectors such as infrastructure, energy, resources and construction.

The biggest sectors for Chinese investment have been energy, infrastructure and construction. Transport is a pillar for construction, with rail projects getting the most money and roads seeing the most deals.

Chinese investment in Asia and Oceania has risen steadily from USD5.7 billion in 2005 to USD60.5 billion in 2020, and the ambitious Belt and Road Initiative (BRI) has been the big engine of China’s outbound investment.

Chinese investments under the BRI have remained robust, although flat on a year-on-year basis through the pandemic, with the total value of contracts signed by Chinese enterprises reaching USD59.5 billion in 2021 compared with USD60.5 billion in the previous year, according to data from the Ministry of Commerce (MOFCOM).

President Xi Jinping, in a 2017 address, noted: “In pursuing the Belt and Road Initiative, we should focus on the fundamental issue of development, release the growth potential of various countries, and achieve economic integration and interconnected development and deliver benefits to all.”

Central Asia, the Middle East and North Africa have been key geographic areas of strategic interest for both the central government and businesses. Foreign contracted projects covered a wide range of sectors including transport construction, general construction, power engineering and the petrochemical industry as the main fields, and newly signed contracts and completed turnover both accounted for more than 75% of the total.

China is also an important strategic ally to countries in the region, given that it is one of the largest consumers of resources and oil, which are economic mainstays of these economies. While several of the countries in the region embraced the BRI, others have sought to maintain strong business and government-to-government relationships with China.

The Russia-Ukraine war in 2022 and associated Western sanctions imposed on Russia have developed new dynamics in the region.

“China is effectively the only alternative to Russia, therefore, China becomes even more important for countries of Central Asia as the major market for export of goods from Central Asia (e.g. oil, gas, and agriculture projects) and major investor, lender and supplier of goods and technologies,” says Marina Kahiani, a Kazakhstan-based partner at law firm GRATA International.

“Chinese businesses, both SOEs [state-owned enterprises] and private companies have even more opportunities in the energy sector including renewable energy, in the oil and gas sector, in public infrastructure (airports, roads, etc.), in the financial sector, in agriculture and industry in Central Asia,” she notes.

“The BRI scaled up China’s investment in infrastructure in Central Asia, however so far Chinese banks and companies have neglected the public-private partnership (PPP) as a specific mechanism available under the current legal framework, mainly because Chinese SOEs opted for special arrangements with local governments instead of participating in open tenders. Lately, however, Chinese companies have started considering PPPs.”

Saniya Perzadayeva, the managing partner of Unicase Law Firm in Kazakhstan, says the transit role of Kazakhstan may strengthen as political instability worldwide and sanctions may pave the way for unprecedented amounts of goods being transported through the country.

“As Kazakhstan goes towards low-carbon development and green economy policies, we assume investments into the renewable energy sector will be welcomed by the Kazakhstan authorities,” says Perzadayeva. “In addition, Kazakhstan has untapped potential in the agricultural sector, and further investments may provide for the export of agricultural goods into China and beyond, diversifying Kazakhstan’s economy.”

Chinese companies have outstanding experience in infrastructure development in Kazakhstan as investors, clients and contractors, and China and Kazakhstan have long-term mutual economic relations based on a shared commitment, she adds.

Perzadayeva says her firm has identified four sectors of increased attention for investors in 2022 – healthcare, big tech, solar power and IPOs. The most interesting legal practice areas in Kazakhstan would be finance, trade, energy and natural resources, oil and gas, nuclear energy, transportation and logistics, fintech, crypto, and IT.

The gradual shift towards PPP projects has come at a time when all governments in the region have enacted enabling legislation. While Tajikistan has had a PPP law since December 2012, Kazakhstan’s PPP law dates back to October 2015. Uzbekistan adopted PPP legislation more recently in May 2019, while Turkmenistan and Kyrgyzstan introduced legislation in June and August last year, respectively. 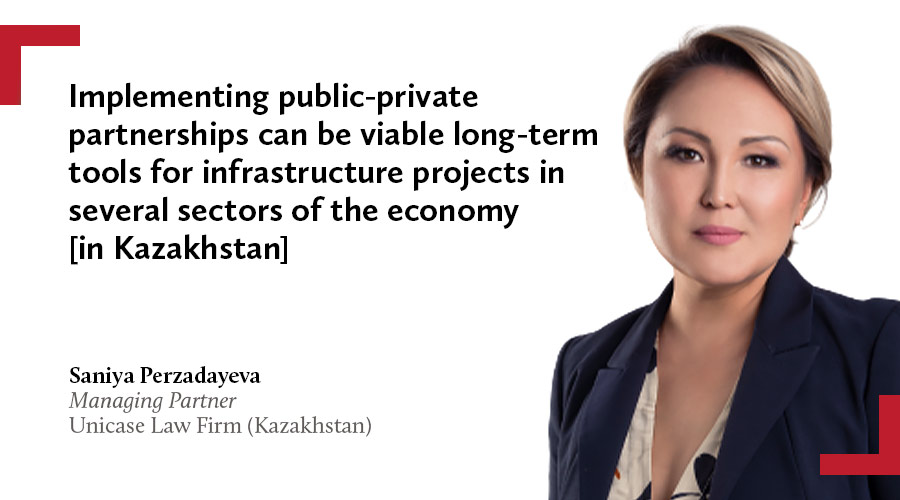