China’s northeast region, comprising the three provinces of Jilin, Liaoning and Heilongjiang, once accounted for the vast majority of China’s heavy industries. As the country’s development had then required, the “republic’s eldest son” delivered in its giant forges to the shower of sparks and noise of worked steel as ships, trucks, machinery and aircraft were all grafted and assembled in this industrial heartland.

Its proximity to the Beijing-Tianjin-Hebei economic circle, the Bohai economic circle and neighbouring Belt and Road countries lends a strategic strength to development for the region, but what cannot be ignored is that its once proud prosperity has waned, and it now faces several economic challenges.

“Economic inactivity in the northeast region has led to a continued weakening of the profitability of some traditional manufacturing companies,” notes Kevin Chen, the managing partner of DeHeng Law Offices in Changchun, the capital of Jilin province.

Coupled with the worsening pandemic situation, banks have tightened lending, leading to low liquidity and forcing companies into bankruptcy.

China has always attached great importance to development of the northeast. As early as 2003, the State Council proposed strategies to revitalize the old industrial bases in the northeast, and breathe new life into the eldest son.

In 2015, the State Council issued the Opinions on Further Implementing the Strategy of Revitalizing the Old Industrial Bases Including Northeast China to promote structural adjustment and encourage innovation, while supporting private companies to participate in the restructuring and reform of state-owned enterprises.

Apart from national-level macro policies, each province also focuses on its own growth strategy. Liaoning has been the most visible economic performer, with the highest GDP in northeast China, and has the Second Circuit Court of the Supreme People’s Court set up in the capital, Shenyang, facilitating the hearing of major administrative, civil and commercial cases.

Foreign trade has been one of the main focuses for the northeast thanks to its location on the China-Mongolia-Russia economic corridor, and its proximity to the Korean Peninsula and Japan.

According to the Heilongjiang Daily, Heilongjiang has maintained a steady growth in foreign trade this year, ranking first in this area among the region’s three provinces. South Korea is also the largest source country of foreign investment in Jilin province, and the largest foreign client base for the region’s law firms.

Lawyers are for the most part optimistic in their outlook for northeast China. “Shenyang’s business environment is developing better and better, which is reflected in the investment,” says Wang Li, a senior partner of Jincheng Tongda & Neal, Shenyang.

“Local enterprises have shown good momentum and high-tech companies have expanded to this region,” he says. “Well-known domestic and international brands such as BMW, Tencent, Evergrande and Huawei have set up branches in Shenyang.”

Guo Weidong, the founding partner of Gong Cheng Law Firm in Jilin, notes that the key industries in northeast China now include modern automotive and accessories, production and deep-processing of agricultural products, and cultural tourism.

Chen, of DeHeng, adds: “Jilin has a good foundation for the development of the automotive industry. There are thousands of state-owned, private and joint-venture automotive accessories companies. And the convenient logistics and supply chain infrastructure can enhance the expansion of the vehicle industry.”

Changchun is also the base for the country’s optoelectronics industry, says Liu Yinming, managing partner at Jingsh Law Firm’s Changchun office. Changchun Institute of Optics, Fine Mechanics and Physics is one of the largest research institutes under the Chinese Academy of Sciences. “The scale of the optoelectronic industry in Changchun is still small, but the structure has a reasonably good foundation,” says Liu.

Agriculture and tourism are also noteworthy. Jilin is a significant agricultural province, considered to be the grain and meat processing base of the country, while Heilongjiang has a significant livestock base and grass production.

In China, the separation of land-use rights, contracting rights and operating rights has enabled farmers to keep the rights to their land while leasing it out to others.

Guo, of Gong Cheng says that with the implementation of the separation, there is a demand for legal services in the establishment of rural co-operative organizations, and for financing large-scale rural land management.

The ice tourism industry in northeast China is emerging with the improvement of infrastructure facilities and services. “With cheap land, low cost of living and low wages, the tourism industry in Jilin has a unique competitive advantage,” says Guo. “Good air quality and social environment have led to the development of related industries such as healthcare.”

But the road to revitalization is not always easy. State-owned enterprises in the region are facing operational difficulties and the challenges are compounded by a global economic slump.

“The downturn in the global economy, the trade war between the US and China, and the slowdown in China’s economic growth have created a new normal of economic development, says Cindy Zhang, a partner at Liaoning-based Fada Law Firm. “Many enterprises are facing operational difficulties due to problems such as capital chain breakdowns.”

Steven Jiang, managing partner at Hui Ye Law Firm in Dalian, a major city in Liaoning, says: “The enterprises with capital chains that have been hit are mainly real economy enterprises, especially small and medium-sized enterprises with a single industrial chain, or that are overly dependent on a single raw material.”

The pandemic has also caused a surge in the proportion of non-performing loans (NPLs) in financial institutions. “The business of collecting and disposing of NPLs has increased significantly,” notes Laura Liu, a senior partner at AllBright Law Offices in Changchun.

She adds that even though some financial institutions introduced loan support policies during covid-19, they could not relieve the real pressure. To reduce the NPL rate and lower the pressure, banks can now only collect the loans by litigation.

Labour disputes have also become an active area in northeast China during the pandemic. “Due to the lockdown, some enterprises have run out of cash and tightened their purses,” says Jiang, of Hui Ye. “The companies have to lower their operating costs by laying off employees and scaling down operations.”

Xu Dayong, a senior partner at Tiantai Law Firm’s Changchun office, points out that economic development and labour relations conflicts were at a low level in the past, but workers now have a stronger sense of resolving labour disputes through arbitration and litigation. In line with this, local administration, arbitration and judicial institutions are also paying increasing attention to labour disputes.

Rent reduction, force majeure, whether a rise of material costs constitutes a change in circumstances, and delays in permit approvals are all hot topics these days, says Wang Chen, managing partner of Jingsh at Harbin, the capital of Heilongjiang.

As an old industrial base, the northeast’s industrial and tertiary industries are now growing slowly, and bankruptcy and restructuring have become crucial means to protect and rescue enterprises that are dragged into difficulties.

“In recent years, bankruptcy cases have proliferated, which is the result of economic development, the elimination of backward production capacity requirements, as well as the implementation of supply-side structural reform,” says Wang Li, at Jincheng Tongda & Neal.

The Reform Plans of Accelerating the Improvement of Market Entity Exit System, issued jointly by the National Development and Reform Commission and 12 other regulators in July last year, clearly stated that bankruptcy liquidation, restructuring and reconciliation should be important ways for market entities to exit the market.

Lawyers note that insolvency projects require specific abilities and qualities of managers, which include integrating, co-ordinating resources, and being goal-oriented.

“The increasing sophistication and publicity of the bankruptcy system will also make it more likely that enterprises and creditors will actively seek to be cleaned up or rescued by the bankruptcy process,” says Zhang, from Fada Law Firm. “With the development of a personal bankruptcy system, the ‘execution to bankruptcy’ integration is normalized, and the types of bankruptcy cases will be more abundant.”

Speaking about the northeast legal market, Guo says: “The northeast is far away from finishing the industrial structure adjustment, and there is a continual demand for bankruptcy restructuring, investment M&A, financing and listing.”

Despite a large number of foreign-related businesses, there are no foreign firms in the northeast’s legal market. “In recent years, the big firms have swept across the northeast, which is a challenge we need to face,” says Guo.

“In the past, law firms in Liaoning were small and medium-sized. But the firms are now expanding, being more specialized in certain fields,” notes Melinda Huang, the managing partner of DeHeng in Shenyang.

“Russia-Japan-Korea regional trade and investment law services will become an emerging legal field in the northeast, and hiring relatively high-end talent is also a new tendency among the firms,” notes DeHeng’s Chen.

In a burgeoning market, how can firms stand out from their competition?

“There are lots of legal needs waiting to be achieved,” says Wang, from Jincheng Tongda, while Wang, from Jingsh, suggests: “Law firms should continue to develop the market and build a brand.”

As the region transitions from old manufacturing economy into modern industrial hub, local law firms realise they must find ways to keep up, adapt and thrive. 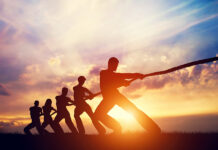