Home Vantage point In the interest of fairness

At a recent New Delhi function marking the 50th anniversary of UNCITRAL, Cherie Blair QC gave a keynote speech on global standards for rules-based commerce. Here she has adapted her thoughts for our readers

The United Nations Commission on International Trade Law (UNCITRAL) recently celebrated its 50th anniversary. As the core legal body of the UN for international trade, for five decades UNCITRAL has focused on the modernization and harmonization of the rules of international business. Its considerable impact on international dispute resolution sees countries fashioning their arbitration legislation on its Model Law, and organizations globally relying on its rules and procedures to regulate their trading relationships and to settle disputes.

With the founding of the first regional office of UNCITRAL – the Regional Centre for Asia and the Pacific – in 2012, the region has seen a 47% increase in the number of states basing their arbitration legislation on the Model Law, from 15 to 22. 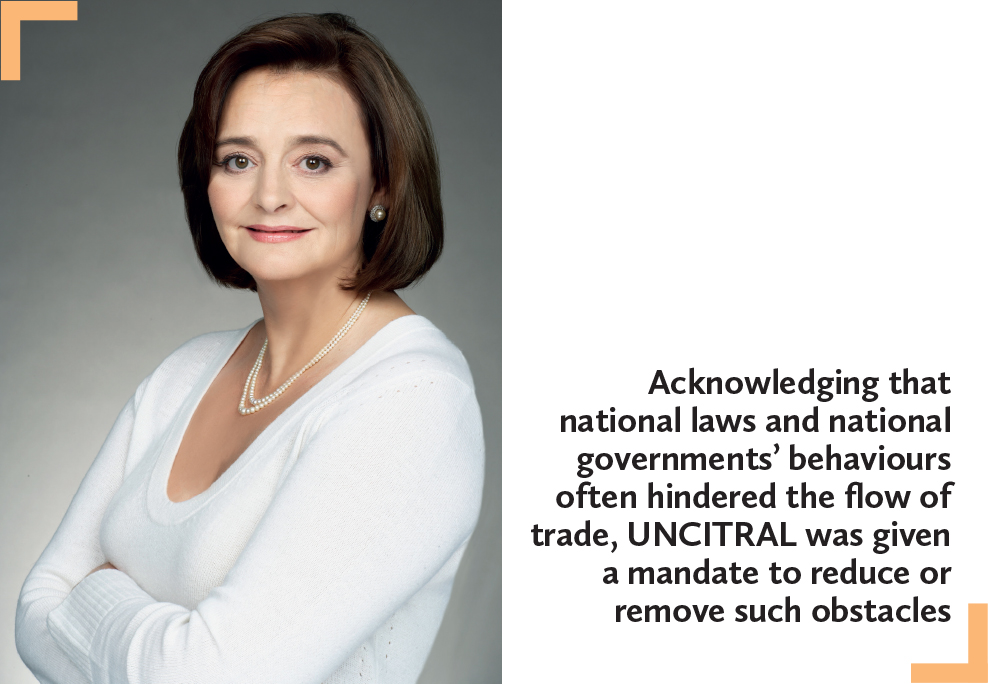 UNCITRAL was founded in 1966, a tumultuous year that also saw nine military coups d’état and four former British colonies gain independence. The world was divided between East and West, the Cold War raised the spectre of nuclear strikes and Vietnam served as a literal battleground between capitalism and communism. Trade with the Soviet Bloc was centrally controlled, with much of the region essentially closed off.

Elsewhere in the world, the revolution which overthrew Fulgencio Batista now entrenched a socialist economy in Cuba, and coups d’état throughout Latin America were orchestrated to prevent the communist threat spreading to other countries. ASEAN’s founding in 1967 was understood by many as a demonstration of co-operation and amity in a region torn between communist insurgency and state expansion.

Acknowledging that national laws and national governments’ behaviours often hindered the flow of trade, UNCITRAL was given a mandate to reduce or remove such obstacles, unifying international trade. However, for this harmonizing experiment to succeed, it needed to navigate a divided world and forge a new understanding of how the world could work. The trend was positive as at this time nations were coming to terms with the fact that unbridled nationalism was inimical to the good functioning of states and the development of their people.

Nonetheless, the road from the supreme sovereignty of nations to a world where states give up some of their powers for the greater good was rocky. Reaction to UNCITRAL’s first programme of agreeing on a unified law on the international sale of goods, for example, was mixed. The then USSR criticized the fact that “only 28 states, of which only three are socialist and two developing states, participated in the 1964 Hague Conference”, and noted that the draft law did “not meet the requirements which the majority of states demand from international instruments of this kind”.

The draft law would eventually be agreed upon, as would dozens of others, irreversibly changing how business is conducted across borders. China’s ratification in 1986 of what became the Convention on Contracts for the International Sale of Goods coincided with large-scale Chinese reform and opening-up policies helping to provide a set of rules that ensured progress and rule-based trade. Today it is China’s and India’s growth and trade that drives the engine of the global economy.

At the same time, in the ’80s and ’90s, free trade agreements comprising BITs [bilateral investment treaties], MITs [multilateral investment treaties], NAFTA [North American Free Trade Agreement] and the Energy Charter Treaty introduced a method of dispute resolution called Investor State Dispute Settlement (ISDS), which gave foreign investors exceptional recourse against arbitrary state behaviour. Given the environment of interventionism particularly prevalent in developing economies, companies were offered such protection because it was understood that without it, the prospects for foreign investment in these regions was diminished.

Fifty years on from UNCITRAL’s founding, and the world is a different place. Formerly closed countries have increased their exposure to other nations, while systems and laws have rushed to keep pace. Complementing UNCITRAL, the expansion of the General Agreement on Tariffs and Trade leading to the formation of the World Trade Organization (WTO), the enlargement of ASEAN and the foundation of the European Economic Community leading to the EU exemplify this zeitgeist.

Today, the Soviet Union is no more and free trade is the victor over coercive collectivist and interventionist policies. Expropriation is no longer a regular state practice, and a consensus has emerged that the best way for a country to develop and advance is to participate in free trade. On the global scale, the benefits are manifest. Millions of people have been lifted out of poverty and standards of living have increased alongside improved security and prosperity.

However, on the national level, while the general principles underpinning international trade are broadly accepted and the positive results of lower prices and greater choice are welcomed, the unintended consequences of globalization have sparked a backlash. The decimation of traditional industries, the technological revolution and labour competition have all combined to create the current Era of Reaction.

Epitomized most starkly in the West by the 2016 presidential election in the US and the Brexit referendum in the UK, as well as Beppe Grillo of the Five Star Movement in Italy and Marine Le Pen of the National Front in France, the Era of Reaction is a modern phenomenon. The movement of populist parties from the fringe to the mainstream, and their increasingly credible competition to traditional political parties, correlates with a decline in voters’ trust in the establishment. Summing up this attitude, then UK justice secretary Michael Gove infamously remarked in 2016 that “this country has had enough of experts”.

India’s prime minister, Narenda Modi, long an advocate for reconfiguring the global institutions to better reflect the balance of nations, encapsulated this mood in an address in January 2017, noting: “Physical borders may be less relevant in this age of bits and bytes. But walls within nations, a sentiment against trade and migration, and rising parochial and protectionist attitudes across the globe are also a stark statistic. The result: globalization gains are at risk and economic gains are no longer easy to come by.”

This article is an adaptation of a keynote speech given by Cherie Blair QC, chair of law firm Omnia Strategy, at an UNCITRAL conference in New Delhi in November 2016 entitled Celebrating UNCITRAL’s 50 Years – Global Standards for Rules-based Commerce. Blair and Claire Kerschensteiner, an associate at Omnia Strategy, adapted the speech specifically for our readers.