As China becomes a global economic heavyweight, cross-border commercial disputes are also increasing rapidly, making international dispute resolution one of the most promising businesses in the legal services sector. Given this big market, many active domestic arbitration bodies are racing to spearhead the international development track of Chinese arbitration. Beijing Arbitration Commission’s recent significant amendment of its arbitration rules has ignited an industry-wide discussion in the “going global” journey of Chinese arbitration. 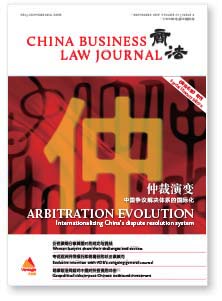 China has also further opened the door for competition between domestic and overseas dispute resolution centres. The State Council recently added a new area to the Shanghai Free Trade Zone – the Lingang area. Reputable overseas dispute resolution institutions are allowed to administer arbitrations and develop arbitration business in this new area. Some experts believe that this move will contribute to the more frequent use of the Chinese language and PRC law in international arbitration proceedings.

A legal legacy features our exclusive interview with Chris Stephens, the outgoing general counsel of the Asian Development Bank (ADB) . Stephens says the bank is on the cusp of redefining its relationship with China, which he says is on the path towards graduating beyond borrowing status with the bank. He also says the ADB’s greatest challenge is an urgent need for governance reforms within the current leadership structure.

There is a Chinese saying that goes, “Women hold up half the sky”. But although the concept of gender equality is generally accepted, Chinese women lawyers still have to give much more effort than their male counterparts to have a successful career, as the traditional belief that women should shoulder more family responsibilities prevails. More than half the sky brings the story of six elite Chinese women lawyers together with the experiences of four other Asian women legal elites who go beyond the norms.

Outbound hard ground finds that given the increasing economic and geopolitical risks around the world, Chinese businesses must be more selective and cautious about their investment, which has led to a decline in outbound deal-making. Protectionism has not only surged in the US, but in Western Europe as well – although exceptions exist, such as Ireland and Luxemburg. Eastern Europe seems to be less affected by the trend, while Africa continues to attract Chinese investment. China’s outbound investment landscape is likely to take new shape in the future.