On 21 January at the Mumbai Cricket Association (MCA) ground, a team of lawyers beat a team of bankers in a cricket match to win the sixth Duane Morris & Selvam Capital Markets Cup. With this win, the lawyers have a 4-2 lead in the annual charity cricket match. 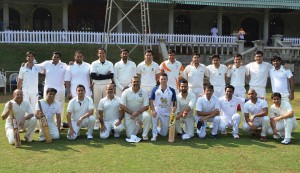 Naredi claimed the man of the match award with a fine performance with both ball and bat, posting 32 off only 17 balls and picking up one wicket to help the lawyers clinch victory.

The match raised more than ₹200,000 (US$3,000) for the Bal Asha Trust, which works towards giving quality care to children who are found abandoned at various public places around Mumbai every year. Khaitan & Co donated ₹75,000, Duane Morris & Selvam donated ₹68,000 and several players also donated to the charity.

The match is organized annually by Benson, head of Duane Morris & Selvam’s India practice and US securities law practice, who captained the lawyers’ team. “It was a very enjoyable match this year, with each team looking the favourite to win at different stages of the match,” said Benson. “To play on the MCA ground, which is a first-class ground, was a real treat. Although I am happy the lawyers won the match, the main thing was bringing lawyers and bankers together for a fun time to raise money for a very good cause.”

Find out which are the best law firms in Indonesia
ESG principles in Asia
Claudia Salomon lays out ICC's strategic plan for Asia
OECD’s Asean project seeks to foster competition in the region’s e-commerce sector
Please send any press releases, deal announcements, details of new hires, newsletters and any other news items to: news@law.asia