AnJie Law Firm and Broad & Bright have entered into a merger agreement to form Anjie & BB Law Firm in January 2022. This is one of the largest law firm mergers in China’s legal market in the past decade.

“China’s top five firms have a large gap with their international counterparts, which is not commensurate with China’s national strength,” said Philips Ding, the managing partner of Broad & Bright in Shanghai. “We have a calling within us, and I hope that in the next 20 to 30 years of my career I will see a little bit of an opportunity for us to catch up.”

The offices of the two firms across the country will also be merged, which means the new firm will have offices in six locations – Beijing, Shanghai, Shenzhen, Guangzhou, Haikou and Nanjing (which will soon be approved) – including about 90 partners out of 350 lawyers, and 100 paralegals and administrative staff. The merger of the two firms’ joint operations in Hong Kong is still under discussion.

The new firm will bring together the expertise of these two firms in various practice areas and industries including antitrust, insurance, life sciences, internet technology, labour law, intellectual property, energy, dispute resolution, mergers and acquisitions, data protection, shipping and maritime, banking and asset management, and will seek to grow business in the digital economy amid China’s industrial upgrading and the gradual clarification of regulatory rules for the internet industry.

“Over the past two years, Broad & Bright has built up its strengths in the digital entertainment, gaming and financial technology businesses, which coincides with AnJie’s keenness to develop,” said Ding.

Ding, who has many years of experience in international law firms and practising in Hong Kong, said that after the merger he would focus on strengthening the firm in the Guangdong-Hong Kong-Macau Greater Bay Area (GBA).

Zhan noted that the new firm’s future expansion would include Chengdu, Wuhan and Hangzhou.

Established in 2004, Broad & Bright had approached seven potential merger candidates in the past decade.

Zhan said that after years of rapid growth, AnJie, which was founded in 2012, “may face a bottleneck in future development”, so a merger with a quality firm had been on the table since 2018, and the firm had been in talks with five firms.

The idea of a merger had been on the two firms’ agendas for some time, but it was an unexpected trip to Shenzhen for Ding that made it happen.

In April, while travelling to Shenzhen with a mandate from the management committee to look into the possibility of setting up a branch office, Ding met Guo Jinglian, the managing partner of AnJie’s Shenzhen office. Ding recalled: “Guo asked if it was possible for both firms to combine together, since we were both looking to grow bigger and stronger. I knew it was a great idea right away.”

After several rounds of negotiations, the decision was reached at the end of July.

However, merging is not an easy task, especially for two firms that have grown to a certain size. There have been cases where mergers have failed due to staff turnover, management and culture clashes.

“It’s like marriage, in simple terms,” said Zhan. “When people are young, they don’t have too much wealth and baggage to marry. As they get older, it’s not as easy to tie the knot.”

“I hope that colleagues from both firms, if we were to come together as colleagues of AnJie & BB, we must discard a notion of lineages,” he said. “In future there will only be ‘AnJie & BB’. If everyone puts their heart and soul into our new platform, then the firm will do well and this merger will be a success. I myself must lead the way first.”

In order to avoid problems that Chinese law firms are often criticised for in terms of development planning, governance structure and execution, Zhan said he expected the new firm to make changes in three areas:

(1) exploring a management mechanism that is both efficient and fair;

(2) placing equal emphasis on legal skills and industry knowledge; and

(3) creating a new, encouraging and happy workplace within the firm.

“Partners, instead of internal competitors, are mutual co-ordinators and promoters for one another,” he said. “Associates and paralegals, instead of having a simple employment relationship, are sharers of common growth and mutual support. The law firm and partners, instead of a managing and being managed dynamic, would share the same path for future development.

“Everyone, whether you are a partner, associate, secretary, back-office administrator, or in a publicity position, is able to share in the dividends of the firm’s growth.”

The new firm will continue to adopt the management and profit-sharing model of AnJie, i.e., striking a balance between corporate and partnership models, on the one hand, encouraging partners to generate income, the major part of which will remain at their disposal and, on the other hand, accumulating public funds for the firm’s development.

“We will probably adopt a remuneration arrangement that is more closely aligned with the market at the partners’ meeting early next year,” said Ding.

He said the merger of the two firms in terms of public budgets would not only improve the salary of junior and middle-level associates, but also the benefits of senior lawyers who are often overlooked by law firms, namely senior counsel and salaried partners.

To ensure service quality while scaling up, Zhan said the new firm would follow the principle of “proactive and cautious” when opening branches or taking on partners and teams, and would raise the threshold for equity partners. 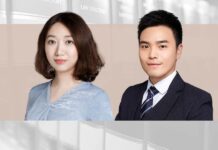