As we celebrate the festive season and eagerly await the Year of the Horse, China Business Law Journal would like to take this opportunity to wish all of our readers a prosperous 2014!

The Year of the Snake has been kinder to some than others, and our Deals of the Year coverage endeavours to highlight the “stars that outshone the others” during the year. 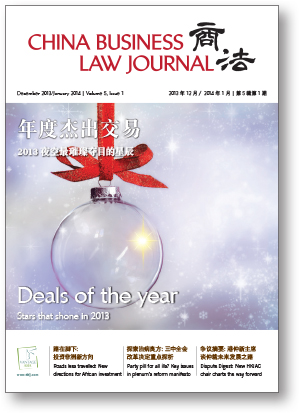 Some, like the Smithfield acquisition, were fairly obvious choices, while others, like the Sunseeker purchase, divulged emerging trends. Activity involving internet companies was particularly busy. And some interesting decisions in dispute resolution that went China’s way demonstrate an increasing sophistication when dealing with overseas disputes.

The number of nominations increased again, a sign that our coverage remains popular and well regarded within the legal community. Thanks to all who submitted their nominations.

With this success in mind, we continue to grow. Please watch for our inaugural China Business Law Awards, recognising the top domestic and international firms for 2013, which will appear in our February issue. It’s a logical next step for us in supporting the legal community we serve, and we’re excited to bring these new awards to you. We also have much more in the way of new things planned for you in 2014, but more of that later.

Elsewhere in this issue, Roads less travelled looks at routes that Chinese investors need to explore to remain viable on the African continent. While natural resources are a primary ingredient behind investment, depressed commodity prices may not auger well for some trade relationships, and while China is keen on deepening bilateral trade with certain countries, the political instability in others make those trade routes harder to travel.

Lawyers point to a broadening of trade partnerships where possible. South Africa, for example, has seen increasing interest from Chinese investors in vehicles, business services, the media and consumer goods, while there is also more interest in teaming up with local partners for projects. Roads less travelled looks at the countries where Chinese interest is most apparent and the legal services that interest has engendered.

The Third Plenum of the Communist Party of China’s 18th Central Committee was held in late November, and the manifesto that emerged was comprehensive and extremely ambitious – yet setting the bar high is often an effective way of achieving results. Party pill for all ills? looks at the key issues within the reform document, including the reform of state-owned enterprises, foreign investment, anti-corruption, financial reforms, rule of law and reforms to the judiciary.

Our Dispute Digest section always generates interest, and this month we feature a column from Teresa Cheng SC, the new chairperson of the Hong Kong International Arbitration Centre, effective 1 January 2014. Cheng gives her vision for a shift in arbitration away from the practitioner’s perspective to the user’s perspective.