In many parts of the Western world there are still quite a few prejudices against Chinese buyers of Western companies – they often are feared as asset strippers, technology transferors and tough employers.

Not so in Switzerland. While such fears existed in Switzerland when Chinese investors entered the Swiss mergers and acquisitions (M&A) market, experience has shown that these fears were ill-founded. After acquisitions, management of Swiss companies has usually stayed in place, and on a long leash. Swiss targets experienced that their new Chinese owners continued to run them with the existing management, without intervening much, as long as the business was run smoothly.

No technology stripping. Chinese companies know that you cannot transfer technology and know-how without the brains behind it, and that moving families from one continent to another is not easy. Further, knowing best that IP protection is an issue in China, they are the last ones to expose newly acquired high-tech to counterfeiting risks. While Switzerland is in high demand as a location for Chinese R&D centres, why, then, should the Chinese move their newly acquired Swiss high-tech and know-how to China?

No post-closure integration or due diligence exercises. Unlike many Western acquirers, Chinese buyers usually do not afflict target managements with time and cost-consuming post-closure exercises, integrating the target group into their own group structure, or with new reporting requirements, new accounting standards, new codes of conduct, new employee training and other attempts at integration into the acquirer’s own corporate universe, or subject them to systematic post-closure due diligence exercises designed to find as many undisclosed deficiencies as possible to claw back a part of the purchase price.

Generous bidders. Last but not least, Chinese buyers are, as a rule, quite generous bidders. As they are often driven by a strategic (or political) need to go international, and have a long-term perspective, they have often less budget restrictions than many Western bidders. Therefore, their toughest competitors in bidding contests are not Western industrial bidders, but Western private equity funds. In the past few years, private equity has increasingly dominated the Swiss M&A market as it became increasingly important for large private and institutional investors to find high-yield investment opportunities. As a result, private equity funds flooded with liquidity are desperately looking for good targets and offer top prices whenever they find one. But compared to Chinese buyers, they are active owners, exiting within five to seven years.

No political opposition. As a result, in Switzerland Chinese buyers are welcomed by sellers and target management teams. Even if a Chinese state-owned giant like ChemChina bids for a shiny Swiss jewel such as Syngenta, there is no opposition from the Swiss government to the deal. First, there is no ordinary statutory basis for government interference anyway, and second, the Swiss government has a liberal attitude towards M&A activity. A Swiss minister (federal councillor) commented on a journalist’s regret that the ChemChina/Syngenta deal could not be prohibited in Switzerland with a simple “why should it?”

There is no such thing in Switzerland as the US Committee on Foreign Investments (CFIUS), which has the power to forbid transactions affecting US companies if it considers a transaction to be against their national interests. Nevertheless, as Syngenta has US group companies, it appears that the CFIUS is actually evaluating the ChemChina deal and may prevent US Syngenta group companies from being part of the deal (which may then abort the entire deal).

In the market of non-listed companies, the years to come will also see an increasing number of companies up for sale. More and more entrepreneurs with no children, or with children unwilling to succeed, may finally decide to sell their businesses, and they are quite likely to instruct their M&A advisers to look out for Chinese buyers.

Felix Egli is a partner at VISCHER and head of its China desk, and Fiona Gao is an associate on VISCHER’s China Desk

Guaranteed basic income for all?

Establishing a company or branch in Switzerland 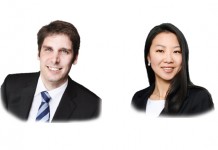