India’s arbitration legislation has moved forward in leaps and bounds but progress may be threatened by courts’ unwillingness to cede their influence Ashok Sharma explains.

Those who use arbitration as a means of resolving disputes have the satisfaction of their cases being settled by a person of their choice, in whose wisdom, impartiality and aptitude they have confidence. At its best, arbitration is fast, efficient, cheap, informal and unshackled by laws like the Code of Civil Procedure, 1908, or the Evidence Act, 1872. 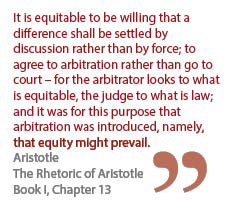 One of its most attractive features, theoretically speaking, is its finality: The absence of multiple appeals that prolong court litigation, not merely causing unconscionable delays but also creating uncertainty about the outcome.

The importance of arbitration as a mechanism to resolve disputes is encapsulated in Lord Mustill’s comment in the forward to D Mark Cato’s Arbitration Practice and Procedure (1997):

“The great advantage of arbitration is that it combines strength with flexibility. Strength because it yields enforceable decisions, and is backed by a judicial framework which, in the last resort, can call upon the coercive powers of the state. Flexible because it allows the contestants to choose procedures which fit the nature of the dispute and the business context in which it occurs. A system of law which comes anywhere close to achieving these aims is likely to be intellectually difficult and hard to pin down in practical terms.”

In India, arbitration has the potential to offer an even greater advantage: a dispute resolution mechanism that avoids the country’s slow and overburdened courts.

Last month, India Business Law Journal reported in depth on the judicial paralysis that renders litigation virtually ineffective as a means of resolving disputes in a timely and cost-effective manner. And the situation is set to get worse. Rapid economic growth and increasing levels of trade and commerce will inevitably lead to a greater number of disputes being filed before the courts.

Internationally, arbitration is now widely used as a neutral forum for resolving domestic and international disputes without resorting to the courts. The number of contracts providing for arbitration as a means of dispute resolution has grown dramatically, with many of them specifying that any arbitration must be conducted by a recognized and neutral body.

One of the best known – and most popular – forums is the International Chamber of Commerce (ICC) in Paris. In 2006, the ICC received 593 requests for arbitration, almost double the number it received in 1989 and 10 times more than in 1960.

These 593 requests affected 1,613 parties from 125 countries, figures which clearly indicate how widely accepted commercial arbitration has become in the international legal profession.

In India, where litigation is still endemic despite being tediously slow and enormously expensive, there is an urgent need to popularize arbitration, conciliation and other methods of dispute resolution which are faster, less costly and more effective.

According to the Statement of Objectives and Reasons that accompanied the act, its purpose was to put in place legislation that is “more responsive to contemporary requirements” because India’s “economic reforms may not become fully effective if the law dealing with settlement of both domestic and international commercial disputes remains out of tune”.

The 1996 act is a composite piece of legislation that provides for domestic arbitration and international commercial arbitration (part I), the enforcement of foreign awards (part II) and conciliation (part III) in India. It places greater stress on party autonomy and minimizes the supervisory role of courts in the arbitral process.

Almost all the provisions are subject to the agreement of the parties involved.

The parties may determine the number of arbitrators, the criteria for appointing them, the rules of procedure and the place of arbitration. If the parties cannot agree on whom to appoint, the chief justice of the Supreme Court or a state high court – or its nominee-appointing authority – can nominate the arbitrator.

One of the fundamental principles of the act is that the courts will not interfere in arbitral proceedings. The only exceptions are to appoint an arbitrator if the method agreed by the parties fails; to decide whether the arbitrator’s mandate should be terminated as a result of an inability to perform his functions or to proceed without undue delay; and to assist in taking evidence.

For the most part, Indian courts have adhered to this principle of non-intervention. In the 2003 case of CDC Financial Services (Mauritius) v BPL Communications, one of the parties obtained an injunction restraining arbitration proceedings from the high court.

The argument was that the pledge of shares sought by the opposing party would enable it to take control of a foreign telecom company, which would be contrary to Indian law. The Supreme Court rejected this argument, saying that the plea was based on its merits and within the sole jurisdiction of the arbitrators and vacated the injunction.

Section nine of the act contains provisions for a party to obtain interim measures of protection from a court for the preservation, custody or sale of any goods included in the dispute, to secure the amount in dispute, or to obtain an interim injunction or appoint a receiver.

The Supreme Court clarified this issue in the case of Ashok Traders v Gurumukhdas Saluja. It held that the party invoking section nine may not have actually started arbitral proceedings but must have contemplated or manifestly intended to go to arbitration and must plan to start the arbitral proceedings soon.

The Arbitration and Conciliation Act gives arbitral awards considerably more strength than they enjoyed under the previous arbitration act. It states that awards become decrees enforceable through the courts after a three-month period in which challenges can be made. In contrast, the previous act merely outlined a process through which arbitration decrees became a “rule of the court”.

Section 34 of the 1996 act does outline certain grounds on which an arbitral award may be challenged. For the most part, these grounds are limited in scope and do not threaten the principles of trust and finality that are integral to the arbitration process. However, one recent court ruling has set a precedent that some observers believe will wipe out much of the progress made with the introduction of the 1996 act.

In the case of ONGC v Saw Pipes, the Supreme Court expanded the scope of section 34 by ruling that it should also include “patent illegality” as grounds on which awards may be challenged. Among the critics of this decision is eminent jurist Fali Nariman.

“To have introduced – by judicial innovation – a fresh ground of challenge and placed it under the head of ‘Public Policy’, was first contrary to the established doctrine of precedent … It was also contrary to the plain intent of the new 1996 law,” he says.

Nariman points out that the 1996 act stresses “the need for finality in alternate methods of dispute resolution without court interference”.

But if the courts insist on having the last word, the law “might as well be scrapped”.

In spite of the controversy over its interpretation by the courts, the 1996 act is a progressive piece of legislation that has gone a long way to building confidence among foreign investors and domestic businesses. It has also given rise to a healthy debate over ways of improving the situation further in order to establish an efficient mechanism for the timely and cost-effective resolution of disputes. As a result of this debate, an amendment to the 1996 act is already being discussed in various forums.

This is a welcome move. While the 1996 act was an encouraging step in the right direction, an amendment is urgently needed to maintain the momentum and ensure that arbitration continues to grow as a means of resolving disputes in India.

In the eyes of some observers, nothing underscores the need for an amendment more than the Saw Pipes ruling, which may have skewed the delicate balance between the finality of arbitral awards and permissible judicial review. According to Nariman, the Saw Pipes judgment has “altered the entire road-map of [the] arbitration law and put the clock back to where we started under the old 1940 Act”.

Ashok Sharma is general counsel at MMTC. He can be contacted at ashoksharma@mmtclimited.com.