The Singapore International Arbitration Centre (SIAC) has witnessed a recent increase in the number of cases involving Chinese parties being filed at the centre.

In the past three years, the number of cases that have involved Chinese parties has grown dramatically, and according to the SIAC’ own statistics, the data can be tracked as follows: 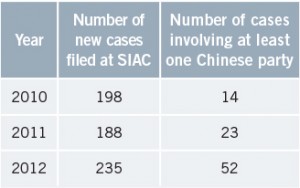 SIAC retains a panel of accredited arbitrators made up of local and international experts, from which the majority of SIAC appointments of arbitrators are made. SIAC also appoints arbitrators for ad hoc arbitrations and is the statutory appointing authority for arbitrators under Singapore law.

Experience suggests that an arbitration at SIAC with a sole arbitrator is likely to require between nine and 12 months, and up to 18 months for a three-member tribunal, from commencement of arbitration to the delivery of an award.

Our experience indicates that arbitrations to be conducted in the Chinese language are on the rise. Language is a key factor in all contracts and arbitrations with Chinese parties, and all parties involved would be well advised to pay particular attention to the accuracy of translations rendered.

We notice that quite a lot of Chinese companies have offshore subsidiaries registered at British Virgin Islands, Cayman Islands, Hong Kong, etc. We have also therefore administered cases where both the claimant and the respondent are China-related companies.

For example, in a recent case, the claimant was an offshore company with its main business office in China and the respondent was a company registered in China. The parties referred their dispute to the SIAC pursuant to the arbitration agreement in a co-operation contract. The law of the contract is PRC law. Both parties were represented by Chinese law firms and the language of the arbitration was Chinese.

The SIAC has endeavored to establish strong relationships with the legal and business communities in China. To this end we organise seminars, for example a seminar for lawyers from the Tianjin Bar Association earlier this year, and a conference focused on the technology, media and telecoms sectors in Beijing shortly thereafter.

We have sought to closely interact with renowned legal experts on China to understand their experience with the jurisdiction. We have also worked closely with the judiciary there to exchange ideas and understand the necessary elements for arbitral awards to be enforceable in China. As a result, our processes for the scrutiny of awards have been tweaked accordingly in relation to China, and have consequently benefited.