General Counsels’ Association of India tipped as a game changer

Senior general counsel of Indian companies gathered on 5 March in Gurugram to launch the General Counsels’ Association of India (GCAI).

Serving as a new voice for general counsel, the association aims to create a robust platform that is run, managed and operated by general counsel across India, and to establish a distinct professional identity. 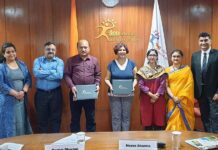