The VAM refers to the agreement designed by investors and investees when reaching an equity financing agreement to adjust the valuation of future target companies, including equity repurchase, monetary compensation, etc., for the purpose of solving the uncertainty, information asymmetry and agency cost of future development of target companies.

The concept of a VAM is actually closely related to enterprises. As long as the enterprise involves financing, it will involve a VAM. Enterprises need funds, and they also need to provide investors with confidence, which is also a protection or guarantee. The parties are actually in a community of interests.

In the practice of a VAM, there have been many failures that have had a great impact, which make enterprises realise the bloodiness of capital in a VAM. But there are also many successful cases, and the VAM has always been highly praised in the investment field. Therefore, enterprises should correctly and rationally understand the problems in a VAM, while establishing a conceptual awareness of the mechanism.

Types and subjects of VAM

There is no regulation on VAMs in China, and there have been controversies about the VAM clauses in investment agreements. The legal status of a VAM in the field of equity investment was not established until November 2012, when the dispute case of Haifu Investment Co Ltd v Gansu Shiheng Nonferrous Resources Recycle Co Ltd, Wisdom Asia Limited and Lubo for capital increase, [(2012) Min Ti Zi No.11], was reviewed by the Supreme People’s Court (SPC) and the final judgment determined that the VAM clauses were partially valid.

However, in the arbitration award of China International Economic and Trade Arbitration Commission (CIETAC), [(2014) China Mao Zhong Jing Cai Zi No. 0056], the VAM clauses between the investor and the target company were determined to be valid. The arbitration case caused big repercussions in the field of legal theory and practice.

On 8 November 2019, the SPC issued the above-mentioned minutes, which basically established the judicial applicable rules of VAMs. The minutes are instructive, and judicial practice generally follows the rules of the minutes.

(1) If no situation of legal invalidity exists in a VAM between the investor and the target company, and the target company claims that the VAM is invalid only on the grounds of equity repurchase or monetary compensation agreement, the people’s court will not support the claim. However, if the investor claims for actual performance, the people’s court shall examine whether it complies with the mandatory provisions of the Company Law on “shareholders shall not withdraw their capital contribution” and share repurchase, and decide whether to support its claim.

(2) If the investor requests the target company to repurchase its shares, the people’s court shall examine it according to the mandatory provisions of article 35 of the Company Law, on “shareholders shall not withdraw their capital contribution”, or article 142, on share repurchase. After examination, if the target company fails to complete the capital reduction procedure, the people’s court shall reject its claim.

Wang Yongjing is a partner at DOCVIT Law Firm 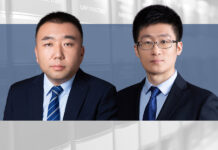