When establishing a wholly foreign-owned enterprise (WFOE) in the PRC, the examination and approval procedures usually require several months. Naturally, investors from Europe and the US would like to shorten the required time so that they can establish their PRC entities and commence operations as soon as possible.

In our experience, when a client elects to invest in a local industrial park or economic development zone, the competent authority will often promise that it will procure the obtaining of the business licence for the new WFOE within a short period of time.

In one case with our American client investing in and establishing a plant in a certain development zone, as approval of the proposal for the project happened to fall in December, the investment bureau and the local administration for industry and commerce issued the business licence after the client had merely signed a simple form, in order to have the total foreign investment amount of that project counted toward the foreign investment attracted by the development zone’s investment bureau for the year. However, the British Vergin Islands company, being the holding company for the proposed WFOE, had not yet been fully established. The “special attention” given by the local development zone resulted in a situation where the subsidiary was established before the parent company.

When such a situation arises, the foreign client will often worry about the validity of the establishment of the company and the related legal risks. 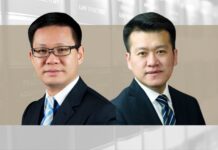