India Business Law Journal identifies and analyses the standout deals and disputes of 2013 and reveals the lawyers who guided them. By Nandini Lakshman

The past year was one of the worst for the Indian economy in recent times. Economic growth plunged from over 8% to between 4% and 5%. Both the economic and political uncertainty affected foreign direct investment (FDI), while some big global acquisitions and borrowings of previous years came back to haunt corporate India.

A widening current account deficit, high inflation, external commercial borrowing, and rising imports of fertilizers, crude oil, coal and gold pummelled the Indian rupee to record lows. Foreign companies acquired Indian ones and increased stakes in their Indian arms, as part of their emerging markets strategy. Many Indian companies that had borrowed heavily to invest in infrastructure assets in India and overseas were forced to hive off assets and restructure and refinance debt.

The stalling FDI spurred New Delhi to reform some sectors. Aviation was the big beneficiary as foreign airlines were allowed to pick up a 49% stake in Indian carriers.

Following a lengthy period of research and consultation, India Business Law Journal has selected 50 landmark deals and disputes that were sealed between December 2012 and December 2013. These deals and cases, which are divided into six categories, have been chosen subjectively based on transactional data, submissions received from Indian and international law firms and interviews with India-focused legal and corporate professionals.

The future of leadership 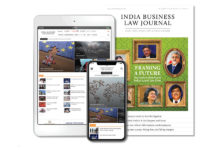 Invitation to be a Correspondent Law Firm

Reaching for the stars

Do lawyers have a duty to help avert a climate catastrophe?
In-house legal teams have guided companies to understand CSR regulations during the pandemic
Survey reveals different perspectives on health of legal market