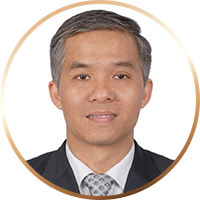 Jeffrey Quan has been a full-time legal practitioner since 1988, studied at the Graduate School of China University of Political Science and Law, IIT Chicago-Kent College of Law and William & Mary Law School in the United States, receiving LLMs in China and the United States. He was recognised as a senior counsel by the Guangdong Department of Justice and Guangdong Department of Personnel.

As early as 1992, Quan obtained qualifications for securities legal services from the Ministry of Justice and the China Securities Regulatory Commission (CSRC). In 1998, he was admitted as a Chinese Certified Tax Agent from the State Administration of Taxation. Subsequently, the CSRC and the National Accounting Institute China awarded Quan a certificate of accreditation of competence to be a board secretary and independent director of a listed company.

Quan and his team, as PRC counsel for the issuers or underwriters, have participated in and successfully completed several domestic, cross-border restructurings and IPO projects for enterprises of varying sizes, and have helped domestic and foreign companies issue various types of bonds or notes at home and abroad.

At the same time, Quan has provided legal services to several corporate and investment funds in areas like refinancing, restructuring and M&A. In addition, he has carried out very focused performances in large and medium-scale project financing permits, domestic and foreign equity, and asset and tax restructuring. These involved industries including large-scale real estate, construction and property management, large and medium-sized insurance services, information technology, film and TV, petrochemicals and mining, light industrial products and paper products manufacturing, shipbuilding, pharmaceuticals and food manufacturing. Quan has worked in the Hong Kong and Guangzhou offices of well-known Hong Kong law firms, as well as accounting companies.