The Association of Corporate Counsel (ACC) Hong Kong held its annual general meeting on 16 June 2022 virtually and elected five new board directors. Following the general meeting, the association conducted a board meeting, resulting in the association’s vice president and acting president, Sharyn Ch’ang, being appointed as president to succeed Sandra Wu, the managing director of Centrium Advisory in Hong Kong, who was elected as president in 2019.

Ch’ang, who has served on the board for close to a decade, has been until recently global counsel at PricewaterhouseCoopers (PwC) in Hong Kong. She is now chief innovation director leading the PwC NewLaw business in the Asia-Pacific region.

During the board meeting, Eddie Bao, head of Asia-Pacific, senior legal counsel and director at software company SS&C Technologies, was reappointed as treasurer and Kathy Kukreja, an independent adviser at a fintech startup in the process of building out its’ operating capabilities, was reappointed as general secretary.

In her president’s address at the annual general meeting, Ch’ang noted that despite the physical confinement and challenges of covid in Hong Kong, the board, which also comprises the hands-on volunteer executive committee of the ACC HK, has done the association proud over the past year, organising a catalogue of 43 events of virtual webinars and diverse educational programmes for ACC HK members.

“It was so pleasing to see some events had more than 70 attendees, a clear sign that members were keen to learn and connect even virtually,” said Ch’ang.

Almost all webinars are accredited by the Law Society of Hong Kong for continuous professional development points which directly benefits members with legal education compliance obligations. Ch’ang also acknowledged all the law firm and allied legal industry sponsors, as well as her fellow board directors and officers, whom without them the events could not have been held.

One particular highlight, said Ch’ang, was the presentation by the former Secretary for Justice of Hong Kong Teresa Cheng, on “Opportunities to HK’s legal and dispute resolution sectors under the 14th Five-year Plan and the Greater Bay Area development” on 14 December 2021.

“The event was very well received by members, and we look forward to future opportunities to collaborate with the Hong Kong government to share topics of interest with our members,” Ch’ang said.

“Another highlight demonstrating the agility of our association and collaboration with the wider ACC Asia-Pacific team was the very successful, first time held ACC Asia-Pacific Xchange hosted virtually in June 2021.”

The ACC Asia-Pacific Xchange offered ACC members the chance to discover best practices and hone their innovation mindset through a virtual learning experience from the comfort of members’ work-from-home environments.

“It was a truly practical and inspirational event for our Asia-Pacific in-house community,” said Ch’ang.

The current ACC Hong Kong board of directors are: 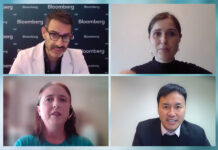 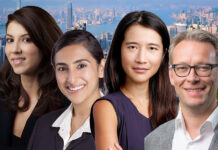