Home The wrap India and China mobilize on cell markets

As the expansion of China’s mobile phone market slows, interest from Chinese manufacturers in India’s booming market has skyrocketed. Research from Counterpoint, a Hong Kong-based market monitoring service, shows that smartphone shipments in 2016 grew at 18% in India compared with 3% globally. 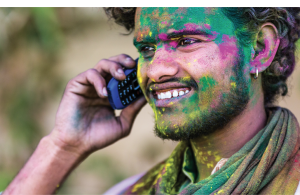 India has also attracted interest from Chinese retailers – specifically from a retailer of mobile phones. In June 2016, Hong Kong-listed Beijing Digital Telecom Company, which has a chain of 1,600 independent and franchised outlets across China, said that it had entered into an investment agreement to acquire a 49% equity interest in Spice Online.

Spice Online, which runs online portal saholic.com, is a step-down subsidiary of Spice Mobility, a mobile handset and digital services technology provider that is listed on the BSE and the National Stock Exchange of India.

“They were interested in a B2B e-commerce platform that we were running, which was called ProfitMandi, and took equity in the company,” said Murali.

While the board of Beijing Digital had earlier resolved to set up Xindiya Investment in Singapore to make the US$2.5 million acquisition, it was eventually made through a Singapore entity called New Idea Investment, which is wholly owned by Beijing Digital.

Simultaneously Beijing Digital announced that it would commit US$2.5 million to form a joint venture in India with Omniventures, the parent of Spice Online. The Chinese company said it would hold 60% equity in the joint venture, which would mainly manufacture and sell communication devices related to mobile phones and accessories.

Following these transactions, Beijing Digital provided shareholder loans of US$2.5 million each to Spice Online and the joint venture company it was setting up.

These loans can be used for general corporate purposes, subject to certain conditions, as the Reserve Bank of India in September 2013 relaxed an earlier rule prohibiting the use of loans from foreign equity holders in the form of external commercial borrowings for such purposes.

Both companies involved in the transaction have their roots in others that were of interest to the lawyers who picked over the fine print. Beijing Digital was founded in 2001 and has more than 100 subsidiaries. It listed in Hong Kong in 2014.

Spice Mobility had told the stock exchanges on 10 June 2016 that Spice Online and its wholly owned subsidiary Hotspot Sales & Solutions, both of which came under the umbrella of Spice Mobility subsidiary Hindustan Retail, were being transferred to Omniventures.

Spice Mobility had announced on 16 May 2016 that Omniventures was a newly incorporated company that it had just acquired.

Salman Waris, a partner at TechLegis, said that with Spice Mobility restructuring and consolidating its business over time, the due diligence exercise needed to cover five Spice entities. These companies had a presence in up to nine different states across India and almost 3,000 employees.

“The sheer compliances that they had been required to meet in the past 10-odd years and the fact that they had got consolidated … were part of the challenge that we faced,” said Waris, who was assisted by TechLegis lawyers Hamdullah Sayeed, Poonam Saxena, Sharad T and Sumit Kumar. He added that the brick-and-mortar aspect of the company was “pretty significant” especially keeping in mind the tight deadlines that had to be met.

TechLegis was also involved in structuring the transaction and advised Beijing Digital to limit its acquisition to 49% of Spice Online’s equity, to comply with Foreign Investment Promotion Board (FIPB) guidelines.

Up to 100% foreign direct investment in the telecoms sector is allowed, but only investments at 49% and below are allowed through the automatic route. However the requirement for FIPB approval for investments above this level is set to change with the announcement in the 2017-18 budget that the FIPB is to be abolished in the current financial year.

Janet Tan, a partner at Dentons Rodyk & Davidson in Singapore, advised New Idea Investment and its parent, Beijing Digital. The firm’s team assisted with structuring the transaction and drafting the share subscription agreement and terms of a shareholders’ agreement.

How long will it be before AI makes partner?
The definitive list of the country’s leading private practice lawyers
OECD’s Asean project seeks to foster competition in the region’s e-commerce sector
Find out which are the best law firms in Indonesia
Please send any press releases, deal announcements, details of new hires, newsletters and any other news items to: news@law.asia