In a very short span of time India’s courts have adapted to working during the pandemic, and the lessons learned during this time will be used to increase efficiency and productivity of the judicial system, writes Delhi High Court Justice Prathiba M Singh

In ancient times, adjudication of disputes in India used to take place at the community level, with local heads of communities resolving most disputes on the basis of oral submissions by parties, without the use of pleadings or lawyers. Local heads were replaced with chieftains or kings during the rule of most dynasties.

This system went through a drastic change with the establishment of formal courts during British rule. Magistrates and judges were appointed for adjudicating civil, commercial and criminal cases, and a hierarchy of courts was also set up. The setting up of the formal court system saw with it the growth of lawyers, court complexes, and the introduction of pleadings and paper. The use of paper, handwritten pleadings and handwritten orders by judges was the prevalent system for more than a century.

With the industrial revolution and the introduction of printing technologies and typewriters, the legal world started using typed/cyclo-styled pleadings, and judges used to issue typed orders until the late 1980s. However, the early ‘90s saw the use of computers, which made legal drafting quite easy, and slowly computerization was introduced into the court system.

In the past 30 years or so, prior to the declaration of the covid-19 pandemic, computers were used for drafting and printing pleadings, printing orders, and digitization of court records. In the past five years, several steps were taken to introduce digital technologies.

One of the most laudable efforts of the Supreme Court was the creation of the National Judicial Data Grid (www.njdg.gov.in), which is a treasure of information, disseminating the live data of civil and criminal cases including daily orders, status, pendency statistics, etc. The grid is so massive that one can access online orders and proceedings of cases at the lower-most court level in India through the grid.

The grid integrates all civil courts, district courts, high courts and the Supreme Court. Thus, data relating to civil and criminal cases are openly and transparently accessible to litigants, law researchers, judges, lawyers and policymakers across the country. Commercial disputes are adjudicated both in civil and criminal courts, depending on the remedy sought by the parties. In civil courts, commercial cases are entertained from the civil judge to the district judge, based on the pecuniary value of the case.

In major metropolitan cities, the high courts also entertain original commercial suits of higher pecuniary value. Bombay, Calcutta, Delhi and Madras High Courts have the bulk of commercial cases, followed by major cities such as Bengaluru, Hyderabad, Pune and Ahmedabad, where they are adjudicated by the district courts.

Prior to the pandemic, video-conferencing was used as a tool for the purposes of recording of evidence, in some cases, and for making submissions, in rare cases. In Delhi High Court, where I am part of the bench, prior to the pandemic, 18 courts were purely e-courts, which had eliminated the use of paper and almost all pleadings and documents were available electronically, and hence these were paperless courts. 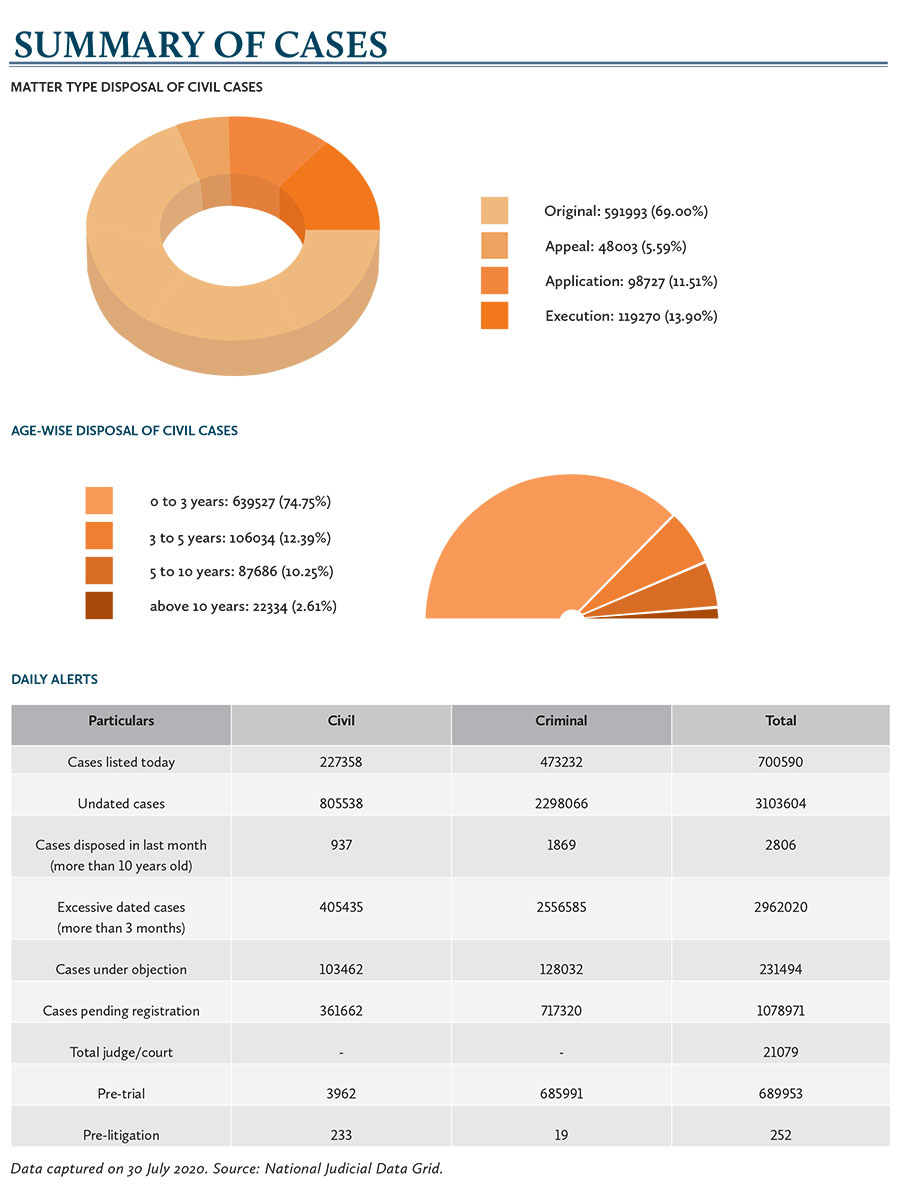 These technological changes, coupled with the amendments in the Commercial Courts Act, 2015, led to a complete overhaul of the procedural rules governing suits. For example, the Delhi High Court Original Side Rules were amended, after 50 years, in 2018. The timelines for adjudication of commercial disputes were reduced. Under the new dispensation, a commercial suit could be disposed of in two or three years after trial, if parties did not seek unnecessary adjournments and lawyers cooperated.

Courts also started using the tools of alternative dispute resolution, such as conciliation, mediation, and even arbitration, to reduce time delays in adjudication. In arbitration cases, the policy has been one of least interference leading to upholding of a majority of arbitral awards. In 18 months, Delhi High Court’s mediation centre has settled nearly 300 cases referred by Delhi High Court and the Supreme Court, and these settlements have also resolved more than 400 related cases, as parties have settled not only the case that was referred, but also other cases that were pending between them.

The absorption of technology was fast-forwarded with the outbreak of the covid-19 pandemic. Suddenly, in March 2020, physical courts had to shut down. Judges and lawyers could not access their chambers or their records and, in the initial month, there was a chilling effect on dispute resolution and adjudication as a whole.

Around May 2020, when it was clear that the lockdown and the pandemic would have a long-term impact on the court system, alternative methods were explored by courts, and slowly and steadily, work has resumed.

The e-committee of the Supreme Court has taken various steps including the introduction of video-conferencing rules, examination of issues relating to live streaming, training of lawyers to participate in such hearings, training of judicial officers etc. Video-conferencing rules were introduced for being adopted by various courts. Links to these hearings are given to court reporters, journalists and members of the public who may ask for the same, so as to ensure transparency and openness.

In Delhi High Court, initially, a few judges would assemble through video-conferencing on alternative days of the week to deal with extremely urgent matters. However, with the passage of time, when the pandemic did not abate and the lockdown situation continued, Delhi High Court has completely scaled up its work, and all judges are holding court on a daily basis.

Each bench deals with approximately 15-20 cases every day. Judges who hitherto were used to reading files on paper and making notes now completely use digital records. Orders are dictated online to stenographers and the same are uploaded the same or the next day. Enormous efficiency has been achieved with the use of modern tools such as advanced video-conferencing software and the use of digital signatures, advanced scanning facilities, preparation of portfolios with bookmarking, etc.

The bar has also seamlessly adapted to changes in the functioning of courts, and, except for the usual glitches due to disruption in internet connectivity, hearings through video-conferencing are taking place in a seamless manner. Such an adaptation to technology has also made judges and lawyers conscious of the fact that there can be a large number of positives in the use of such technology after the pandemic as well.

For those members of the bar who do not have the necessary equipment to attend hearings from home, facilities have been created in the court premises for lawyers to join hearings. These facilities are being used by lawyers who come to the court building, while maintaining social distancing.

While one misses the usual hustle and bustle of courts, covid-19 has impacted dispute resolution and courts in a permanent manner. The use of video-conferencing tools has ensured that lawyers located in far-off places can also attend to their cases without being physically present. In a large number of hearings, litigants are able to join in from across the globe and view the proceedings without having to come to court.

In some commercial disputes involving stakes of millions of dollars, the number of persons participating in one hearing, including litigants and lawyers, could be over 50, when there are only two contesting parties. This shows that video-conferencing hearings can also be very transparent, and have made the court accessible by removing geographical barriers. In one hearing involving a university, 150 participants simultaneously joined the hearing.

In most commercial cases, lawyers, law firms and litigants are fully equipped to participate in video-conferencing hearings. They are also comfortable with online filings. Junior members of the bar are getting an equal opportunity in such hearings, and the preparation required both by lawyers and judges is much more than what is required in physical court hearings, owing to the consciousness that there is limited time in a video-conference hearing.

In a very short time, the court system in India has adapted to working during the pandemic and ensuring that, to the maximum extent possible, court work is not affected. The support staff in courts, such as the court masters, stenographers, law researchers, etc., have all been made to adapt to the pandemic and work from home.

Efficiency is not compromised and the intention of the system has been to ensure that each one does his/her best to contribute. In order to enable staff attached to courts to participate effectively in virtual hearings, various facilities such as broadband connections and provision of hardware, etc., have all been approved and sanctioned by the court.

Experience during the pandemic has shown that, though video-conference hearings are prevalent, the same need to be scaled up, as the quantum of cases heard still does not match the physical courts. Thus, newer mechanisms are being explored to increase work through video-conferencing. Live streaming of proceedings is also under consideration.

The pandemic has restricted people to their homes, but it has not been able to destroy the resilience of the system. The court system has fought back against the crippling pandemic, and will continue to do so in the days and months to come.

The day is not far when virtual courts are blended with physical courts to increase the efficiency and productivity of the judicial system, and finally to dispense justice in a timely and effective manner.

Justice Prathiba M Singh is a Delhi High Court judge. She can be contacted at: prathiba@pmsingh.in