In early 2009, Indian generic drug maker Wockhardt was forced to rethink its strategy as a result of difficulties posed by the global financial crisis. The company lacked resources and was struggling to pay off US$800 million in debt after buying French pharma company Negma Laboratories for US$265 million and US-based Morton Grove Pharma for US$38 million in 2007, and Irish generics maker Pinewood for US$160 million in 2006.

With a default on payment obligations imminent, the company was keen to restructure its debt. With the support of its major lenders – including big Indian banks such as ICICI Bank, State Bank of India, Indian Overseas Bank, Punjab National Bank and HDFC Bank – Wockhardt obtained approval for a corporate debt restructuring (CDR) scheme starting in April 2009.

Support from big creditors such as State Bank of India and ICICI Bank boosted market confidence in the company. “If you have the biggest public-sector bank and one of the largest private-sector banks on your side, although on paper, then you have a good chance of winning the battle”, says Neerav Merchant, a partner at Majmudar & Partners, who represented Wockhardt throughout the dispute with holders of its foreign currency convertible bonds (FCCBs).

Despite the support it received, Wockhardt seemed totally unprepared for this battle. The company had issued US$110 million worth of FCCBs in 2004 and these were due for repayment in October 2009. Wockhardt had to repay about US$140 million unless the bondholders agreed to convert the FCCBs into shares at US$10 a share.

The prevailing market price of the shares was US$3.70. The bondholders proposed a conversion price of US$4.20, but Wockhardt ultimately rejected this offer.

According to Wockhardt’s CDR scheme, the FCCB holders could redeem the bonds at a discount of 65% if they decided not to convert the bonds into shares. But the bondholders turned this idea down. The stalemate continued and Wockhardt defaulted on its payment.

Wockhardt managed to reach a settlement with some FCCB holders, which agreed to replace the defaulted bonds with new ones that were scheduled to mature in 2015. However, major bondholders including New York-based hedge fund QVT Financial and one of Wockhardt’s rivals, Sun Pharma Global, rejected this option.

In November 2009, a group of FCCB holders including QVT filed a winding-up petition against Wockhardt in Bombay High Court, demanding the appointment of an official liquidator to execute asset divestments for the recovery of their dues.

Defending the move of her clients, Sonali Sharma, a Mumbai-based partner at Juris Corp who represented the FCCB holders in various court cases, says that it was imprudent for Wockhardt to go ahead with the CDR without consulting the bondholders. She adds that the bondholders were not party to the CDR and therefore were not bound by it.

“The banks can enforce their security to recover their money, but to ask the bondholders to delay their receipts without any say in the restructuring was not on,” she says.

Although Merchant at Majmudar & Partners concedes that Wockhardt could have consulted more with the unsecured creditors, he says that, “looking at the publicly available track record of the funds holding the bonds, even if Wockhardt would have done more, they would not be satisfied and would have still looked to get more out of Wockhardt”.

Praising Wockhardt’s CDR, Merchant says that it was a well constituted scheme with lot of thinking and projection, which has helped revitalize the company.

Between October and December 2009, soon after it went into CDR, Wockhardt posted a loss of US$37 million. In the financial year ended 31 March 2011, it made a profit of US$27 million.

Wockhardt’s annual report published in April 2011 says, “the company’s performance has been better than the projections envisaged under the CDR and the company is regular in the debt servicing provided under the CDR scheme”.

However, a critical aspect of the CDR scheme, which required Wockhardt to sell its “non-core businesses” to raise US$150 million over a six-year period (between 2009 and 2015), was stalled due to further objections from FCCB holders. The disinvestment condition was set after CDR participants agreed to provide US$100 million in additional lending and a facility for US$50 million more if required.

Wockhardt had already raised US$60 million through the sale of its loss-making German subsidiary Esparma and its animal healthcare division before October 2009, when it defaulted on the FCCB repayment. Further, its promoters, the Khorakiwala family, had sold 10 hospitals to Indian company Fortis for US$180 million. This sale was unrelated to the CDR and Wockhardt.

However, due to objections from the FCCB holders, Wockhardt failed to pull off its largest disinvestment. In July 2009, the company announced a deal to sell its nutrition business to US-based Abbott Laboratories for US$130 million. The assets that were to be transferred included infant food brands Farex, Dexolac and Nusobee, adult food supplement Protienex, and manufacturing facilities in Lalru and Jagraon in Punjab. The deal was called off in April 2010.

In January 2011, Wockhardt revived the plan to sell its nutrition business, this time to French company Danone for US$300 million.

No incentives, no cooperation

Sharma says that if the Abbott sale had gone ahead, “the fear was that even if we succeeded in getting the company wound up there would have been nothing left to recover”. Sharma, Juris Corp and the FCCB holders watched Wockhardt’s every move and monitored its commercial intent with hawk-like scrutiny. Although the bondholders could be accused of stubbornness, in the present regulatory scenario, the legality of their actions is difficult to fault.

Shishir Mehta, a Mumbai-based partner at Khaitan & Co, who represented the international lenders, including foreign branches of ICICI Bank, explains that “the current system does not incentivize the unsecured lenders to cooperate with the secured lenders. The unsecured lenders have repeatedly tried to scuttle the process of the restructuring in various cases.” 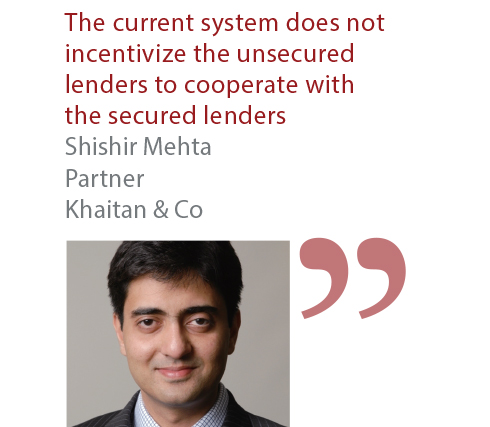 Mehta believes that if a company has many unsecured lenders, any CDR scheme it decides to adopt is likely to fail. However, he notes that the CDR process remains the best option in the Indian restructuring context. “We [at Khaitan & Co] have successfully conducted CDR for Maytas [an affiliate of the erstwhile Satyam Computer Services], though most of the creditors there were domestic lenders,” he says.

In a typical CDR, says Mehta, a master restructuring agreement is prepared, after which the company, the CDR body and the banks adopt a letter of intent, which is an extended term sheet laying down the commercial agreement.

Merchant says that before opting for the CDR route, companies should carefully consider how much time they may need to recover from financial troubles. “CDR is a good option only if a company is confident that it can pay off all its debt after successful restructuring within five to seven years,” he says. 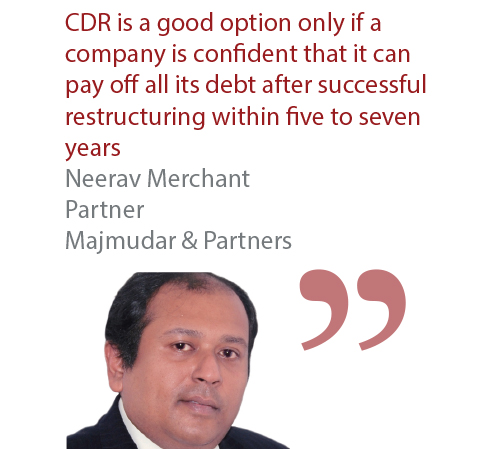 If more time is required and the financial future is unpredictable, he suggests that qualified companies should consider filing an application under the Board for Industrial and Financial Restructuring (BIFR), “where at least the company does not have the risk of facing any litigation from its creditors, unless BIFR specifically permits”.

BIFR is a quasi-judicial body providing bankruptcy protection solely to companies in the manufacturing sector.

In addition, Merchant says that a substantial contribution from a company’s promoters is very important for a successful CDR. “Once a CDR scheme is approved, the company is completely locked in and leased out as everything is routed through a specific account created under the CDR,” he says

On 11 March 2011, Judge Dharma Adhikari in Bombay High Court admitted the winding-up petition. Wockhardt appealed and on 11 October, a two-judge division bench of the court comprising justices DK Deshmukh and Anoop V Mohta, directed Wockhardt to pay the FCCB holders their dues by August 2012 in eight instalments, including the redemption premium and interest on the reducing balance. The judgment stated that if Wockhardt failed to pay up, an “official liquidator shall stand appointed as provisional liquidator of the company”.

Raksha Kothari, a Mumbai-based partner of DSK Legal, which represented the trustees of the bondholders, notes that “in spite of secured lenders objecting to our petition, the judge [at the original hearing] said that the bondholders are not part of the scheme”.

According to Kothari, once the judge recognized the trustees as the creditors, he did not go into other details. “He only saw that there was a default and there was no bona fide dispute,” she says. “[Wockhardt’s] only argument was that it was going through a bad time and [did] not have the money.” 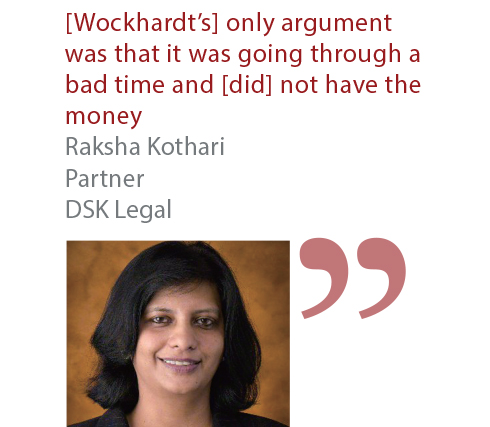 Kothari, however, acknowledged that opposition from Wockhardt’s 7,000 employees and secured lenders, including major banks, posed a challenge, as the judge could have asked: If the others have confidence in the CDR, why are you not accepting it? The complicated nature of FCCBs also needed to be explained in detail in court, she says.

Wockhardt is an atypical Indian company with 72% of its US$850 million revenue generated outside India, mainly in Europe and the US. According to Mehta, the scale of the restructuring and the variety of creditors involved was unprecedented. “From secured creditors to unsecured creditors, domestic lenders to international lenders, public banks to private creditors, there was a very diverse set of lenders, not just in terms of the numbers but also in the quality of lending,” he said.

The challenge for the lawyers, says Mehta, was to meet the expectations of various lenders, which included foreign banks that had lent money to Wockhardt’s foreign divisions. “As there were multiple banks involved, the process could not [be] managed by their in-house lawyers and therefore an independent law firm was hired,” he says.

A significant aspect of the Wockhardt saga was Sun Pharma’s role among the FCCB holders. There were allegations from the Wockhardt camp that Sun Pharma did not play fair and even if Wockhardt had agreed to pay the full amount, Sun still would have tried to hurt Wockhardt.

Sharma rejects this assessment and says that Sun Pharma never intended to curb Wockhardt’s recovery. “Sun Pharma’s only grievance was a contractual right to receive repayment under the FCCBs, which had nothing to do with the fact that it was a competitor of Wockhardt,” she says, “After all, it went along with the other bondholders.”

Merchant believes that Wockhardt’s experience will deter Indian companies from using financial products like FCCBs. He says that a company doing any kind of restructuring must assess its exposure to unsecured creditors, especially if they are foreign investors, and obtain their consent. “The expectations of these funds have to be understood well as some are purely investment-based equity growth funds while others may have different agenda,” he adds. 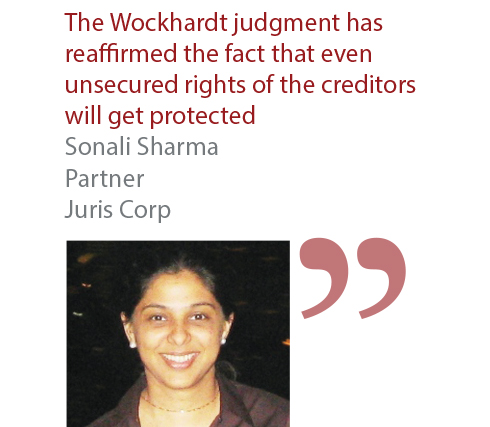 OECD’s Asean project seeks to foster competition in the region’s e-commerce sector
Find out which are the best law firms in Indonesia
How long will it be before AI makes partner?
Claudia Salomon lays out ICC's strategic plan for Asia
Please send any press releases, deal announcements, details of new hires, newsletters and any other news items to: news@law.asia