The Belt and Road initiative dwarfs the Great Wall of China, and pretty much anything else on earth, in its perceived magnitude. In the first of a special series of articles, Andy Gilbert looks at the germination of the initiative and traces its growth so far

If the whole is greater than the sum of its parts, then the One Belt, One Road (OBOR) initiative is undoubtedly the biggest infrastructure project ever conceived. Six economic corridors running through Asia, Europe and Africa, connecting vibrant economies of East Asia at one end with developed Western Europe at the other. A massive upgrade of the region’s infrastructure: roads, railways, ports, power stations; interconnected via more than 65 countries covering almost two-thirds of the world’s population, one-third of global GDP, and a quarter of all goods and services worldwide. Even Aristotle might have raised an eyebrow.

But what exactly is OBOR, which has more recently, and perhaps more accurately, been labelled the Belt and Road initiative? In terms of infrastructure, it’s perfectly tangible. A significant development strategy launched by the Chinese government to create a modern day Silk Road Economic Belt and 21st Century Maritime Silk Road, promoting economic co-operation among countries along its land and sea routes.

In other ways, however, it’s perhaps not quite what it seems. Layered beneath the millions of tonnes of concrete lies China’s push to take a bigger role in global affairs, its need to export excess production capacity in areas such as steel manufacturing and infrastructure construction, and so expand its political influence, internationalize the renminbi, and kick-start its economy amid slowing growth in exports and fragile domestic demand.

“OBOR is a concept rather than any detailed plan,” says Ronald Sum, a Hong Kong-based partner at Troutman Sanders and chair of the International Chamber of Commerce Hong Kong’s (ICC-HK) Arbitration and ADR Committee. “On the commercial side, the OBOR initiative is predominantly to promote trade and investments among various OBOR countries. On the non-commercial side, it is the ultimate integration of different systems – economy or otherwise – within the OBOR countries.” 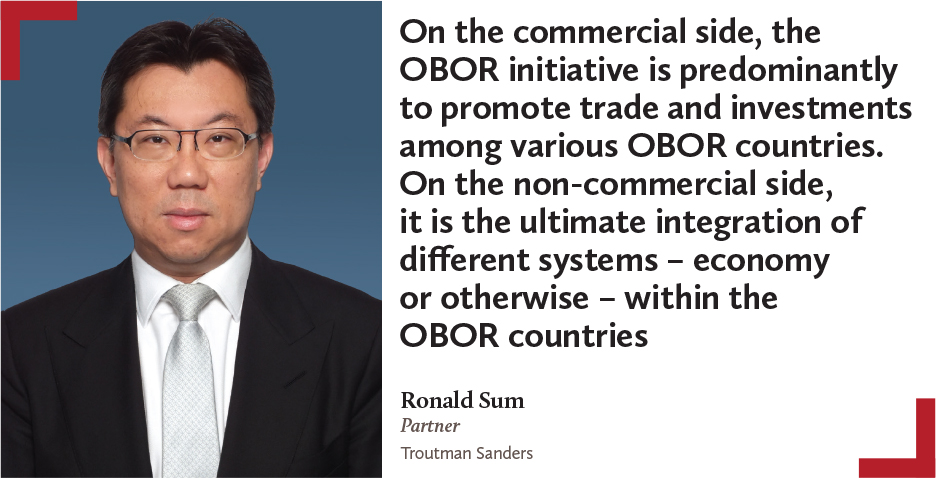 It’s certainly not without controversy, or scepticism at the very least. Some China watchers have called the initiative financially unsound and unsustainable, with a price tag in the region of US$8 trillion. Certain projects, almost entirely financed by Beijing, have even been likened to Chinese economic aid rather than bilateral investments, with all the resulting influence cynics would point out that brings.

Chinese Foreign Minister Wang Yi has dismissed comparisons of the initiative to the US-sponsored Marshall Plan, which gave billions of dollars of economic support to help rebuild Europe following World War II, but also to try to exert its influence while stemming the spread of communism. The Belt and Road initiative is “the product of inclusive co-operation, not a tool of geopolitics, and must not be viewed with an outdated Cold War mentality”, said Wang.

However it’s viewed, there has already been strong consolidation of the framework for the initiative. “Importantly, it is now clear that the groundwork has been laid and ‘stress tested’ through actual projects’ initiation, development, financing and operation,” says Carolyn Dong, the Beijing and Hong Kong-based head of energy – China (finance and projects) at DLA Piper. “The key institutional framework and corresponding funding bodies have been established and Chinese corporate momentum is now all firmly in place behind the initiative.”

The Belt and Road may be the land-based infrastructure of the Silk Road Economic Belt and the ports and shipping routes of the 21st century Maritime Silk Road, but a third avenue – the Silk Road e-highway – is likely to become perhaps even more important, as e-commerce increasingly facilitates most of the trade along its routes.

At the forefront of this is China’s Alibaba Group, the world’s biggest e-commerce company, whose B2B and B2C platforms are aiming not only to facilitate trade but also to educate the newest players who are likely to take advantage of the Belt and Road initiative.

“Our in-house lawyers play a significant role in this regard,” says Cindy Hui, senior legal counsel at Alibaba Group. “For our lawyers it’s about coming up with the structures, with the direction, understanding the limitations of each country in terms of international trade, research on customs laws, tax laws, consumer protection, trade barriers, anti-trust laws, anti-competitive laws.”

Overcoming the language barriers between markets and understanding local customs and methods is also key. “In terms of what the legal challenges are, when we try to break into local markets there are obviously existing local players,” says Hui. “So how do we collaborate with them or understand the market and make a proportion of market share for our businesses? This is a legal challenge because we need to understand, without being a local, what the restrictions are, such as tax restrictions and customs restrictions, so we can make our businesses successful and scalable.”