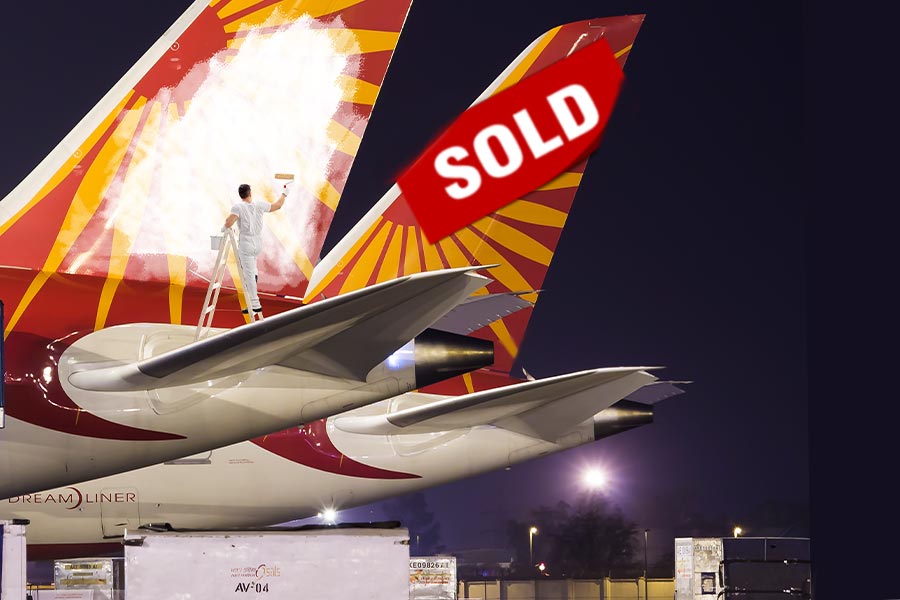 The USD2.4 billion divestment of national carrier Air India, which was nationalised in 1953, means the airline is returning to its original owners, the Tata Group. Freny Patel explores the background to this momentous deal

Note: The Tata-Air India deal has been cleared for take-off by the competition authority. The CCI managed to clear the transaction within a fortnight of the Tata Group’s merger filing on 1 December.

The divestment of India’s national carrier has had more than its fair share of turbulence since day one, when the government initiated the privatisation of Air India back in 2017, and witnessed two aborted missions.

The government’s latest drive to sell Air India succeeded possibly after it climbed down on a couple of key contentious issues: It granted the flexibility to bidders to decide on the quantum of Air India debt they were willing to absorb; and the income tax department permitted the successful bidder to carry forward Air India’s losses and set them off against future profits.

The government’s concessions brought immediate results as Tata Sons and SpiceJet founder Ajay Singh bid for the national carrier and, eventually, Tata was named the winning bidder, returning the airline to its original home.

“India will lose a national carrier but the divestment was imperative,” says Anuj Trivedi, a partner at Link Legal who, along with his team at the firm, advised Air India on the transaction. “It is a perfect match for the Tatas, especially since the corporate group knows the Air India structure well, having started the airline.”

Tata has acquired the beleaguered national carrier for INR180 billion (USD2.4 billion). It will take on board INR153 billion of debt, one-quarter of the airline’s total debt, and pay the government INR27 billion in cash.

“The Tatas will have the opportunity of regaining the image and reputation enjoyed in earlier years,” he said in his tweet. “Under the leadership of JRD Tata, Air India was one of the most prestigious airlines in the world, and now the Maharaja will return to Tatas after seven decades.”

While the deal has been sealed, drawing the curtains on the vexed divestment, putting the sale together was a complicated affair.

The key management of Air India, four regional directors and their respective aides, along with the special cell, were involved in the due diligence process, he says.

If that was not enough, the due diligence process, which involved the physical verification of documents, was “further complicated and marred with covid-19-related lockdowns, and took almost a year to complete,” says Trivedi.

There were days when Air India officials would call and inform the legal team that the office was shut due to covid, he adds.

However, Trivedi applauds the instrumental role played by Air India’s managing director, Rajiv Bansal. He was totally hands-on in seeing the deal through, Trivedi tells India Business Law Journal. “The special cell constituted by Air India for this exercise was extremely co-operative and hardworking, and toiled with us to see the closure of this exercise,” he adds. The successful closure of a divestment of this size by the Indian government will boost investor confidence, says Trivedi. “The approach of the government of India was of an ‘enabler’ – sharing the debt liability of Air India and the decision to divest its entire stake were instrumental in achieving closure,” he adds. As the Indian government prepares for the next round of divestment and the sale of other crown jewels, Trivedi says the due diligence “was an amazing learning experience and, if given a choice, I would love to do it again – hopefully in a non-covid era”.

While Air India’s massive operations give the Tatas access to preferred landing slots and lucrative international routes, they are not exactly acquiring a cash cow. Rather, the conglomerate is getting a bleeding airline that has been leaking INR200 million (USD2.6 million) a day to stay aloft.

The government has reportedly infused INR1.1 trillion to keep Air India flying since 2009-10. As of 31 August, the debt on Air India’s books reportedly stood at INR615.62 billion. The accumulated losses of the carrier amounted to INR839.16 billion as of 31 March 2021.

The outstanding debt will be held by Air India Assets Holding, a special purpose vehicle created in 2019 for holding debt and non-core assets of the Air India group. This will include four Air India subsidiaries – Air India Air Transport Services, Airline Allied Services, Air India Engineering Services and Hotel Corporation of India, along with land, buildings, non-core assets, and other non-operational assets. The government has announced plans to monetise the Air India group assets to make good the outstanding debt that has been retained by the special purpose vehicle.

Not included in the deal, and crucial for the national carrier, is its profitable wholly owned maintenance, repair and overhaul (MRO) subsidiary, Air India Engineering Services – and here is where the heartburn lies for Tata.

“Tata is getting an army of soldiers, but the arms and ammunition are with someone else,” says a person close to the deal. It will be challenging for Air India as the “lucrative engineering business” will be monetised to pay off the debt, he explains.

But that is not the end of the story. Tata will need to pump in additional funds to refurbish the obsolete fleet and retain the existing employee base for a minimum period of one year, only to restructure the staff strength afterwards by offering a golden handshake via a voluntary retirement scheme.

Tata is reportedly preparing a war chest to reduce Air India’s debt liability by raising INR230 billion to fund the acquisition and replace the existing expensive debt, allegedly raised at 9-10%. The hope is to raise fresh loans at an annual interest rate of 4-5% from Air India’s existing lenders. This brings up the question of whether the acquisition is really lucrative for Tata, or, as some insiders suggest, was the deal forced on the conglomerate?

It is easy to suggest what could have been done better once the task is complete. But, as Trivedi says, “The government played its cards well this time and adopted the role of an enabler … unlike 2018, the government took bold decisions like sharing the debt liability of Air India and divesting its entire stake.”

Air India and the Tatas have declined to comment. One corporate lawyer points out that the Tatas may delay the restructuring exercise considering that 4,000-odd employees will retire in the next two to three years. Air India has a total staff strength of about 12,000, which includes 8,000 permanent employees and 4,000 contractual staff.

While a majority of these employees seem elated that the national carrier has been taken over by Tata, about 890 permanent employees, largely staffed under a sports quota, fear losing their jobs once Tata takes over the management. This includes celebrity cricketers like Harbhajan Singh and Yuvraj Singh. Even former Indian cricket captain Mahendra Singh Dhoni was initially on Air India’s payroll before he left to join India Cements as vice president. It’s not just cricket – half of India’s hockey team, football team, badminton team and other sporting celebrities are on Air India’s payroll.

To complicate things, the deal could still hit some turbulence as it has yet to receive antitrust approval, and especially because Tata Group has an existing presence in the aviation sector, with a 51% stake in Vistara, a joint venture with Singapore Airlines, and an 84% shareholding in the budget airline AirAsia India, a joint venture with Malaysia’s AirAsia Group.

In its merger filing, Tata said that the acquisition of Air India would give rise to horizontal and vertical overlaps, but these would unlikely have any impact on competition in the aviation industry.

“An in-depth review of the merger filing is anticipated because Tata has an existing investment in two competing airlines and the acquisition of Air India would make it the third,” says Anisha Chand, a partner at Khaitan & Co.

“The Competition Commission of India [CCI] is unlikely to red-flag the deal considering that this is government-driven divestment, and the parties would likely have undertaken a pre-filing consultation with the authority prior to formally applying for merger review,” she adds.

Kanika Chaudhary Nayar, a Delhi-based partner at L&L Partners, agrees that the deal will be closely monitored by the antitrust authority. Given that a debt-laden government entity is being acquired to benefit the economy, not to mention the price-sensitive and intensely competitive Indian aviation sector, she says it should hopefully not face unsolvable hurdles.

Tata acquiring the national carrier is probably the last hope for Air India and that argument could well be used to seek merger clearance from the CCI. Why not, when the exchequer is losing INR20 million a day to keep Air India going?

However, in its merger filing, Tata did not take up the argument of failing firm defence, despite the fact that Air India is ailing and debt-ridden, and seeking a white knight. It is possibly that it could not have put the fact in black-and-white, considering Air India was once a crown jewel.

The Competition Law Review Committee Report of July 2019 had suggested that combinations unlikely to cause an appreciable adverse effect on competition and corporate insolvency resolution plans should be green-channelled. Although the green-channel approval route was implemented, the suggestion regarding firms under corporate insolvency resolution plans is still pending.

“While a green channel in the Tata-Air India deal is unlikely, the failing firm defence will definitely act as a catalyst for a swift approval and should be put forward by the parties to secure an early approval,” says Nayar.

THE RUNWAY IS READY

Things are definitely heating up in the Indian aviation sector, which had been through a tough period with the failure of Jet Airways and then the impact of the covid-19 pandemic. However, with the Air India deal done and reports of new airlines launching, these are interesting times for the sector in the country.

Tata will end up with full-fledged international operations and two low-cost carriers placing it in a formidable position in the growing aviation market.

“The government can stimulate the aviation sector further by completely doing away with fare caps as travel demand has picked up in the past few months,” Ronojoy Dutta, chief executive officer at IndiGo Airline, India’s largest airline by market share, told India Business Law Journal. “These restrictions were implemented for good reasons last year – now is the time to relax them,” he adds.

Indigo was never in the race for Air India. “We are frankly not much focused on the deals being done around us,” says Dutta when asked if he anticipates more M&A deals in the aviation space. “It seems demand for air travel is once again on the rise, as flying is one of the safest modes of travel and has seen a very strong festive demand,” he says.

IndiGo Airline believes that Air India under the Tata Group will be a strong and economically responsible competitor. “We have always believed in healthy competition, especially in times like these when the aviation industry has seen so many lows recently,” says Dutta. Healthy competition is not only good for consumers but also the sector, he adds.

On the international front, with another covid strain, Omicron, many countries have put controls back in place. IndiGo is keen to restart international flights under bilateral agreements with countries adding to those already operating under the “bubble” arrangements, notes Dutta.

Globally, many are thinking this is a good time to get into the airline business, with the availability of relatively cheap aircraft and capital, but the business is never easy and the number of important inputs outside airline management’s control, for instance fuel costs, is often a surprise to novice investors, he says.