Plans to activate international arbitration and mediation in Japan are being aided by the opening of two new centres and the allocation of training resources, writes Yoshihiro Takatori

For legal practice in Japan, especially dispute resolution, 2018 will be a landmark year. The Japan Association of Arbitrators (JAA) is proceeding with two crucial projects: first, to establish a new dispute resolution centre in Japan called the International Dispute Resolution Centre; and second, the Japan International Mediation Centre in Kyoto (JIMC-Kyoto). Both initiatives have strong support from the Japanese government, multiple industries and associations, as well as many Japanese and international legal professionals.

Separately, JIMC-Kyoto will be established at Doshisha University, one of the leading private Japanese universities, and act as an institution that administers mediation proceedings, providing its mediation rules and list of candidate mediators, which can be a reference for users for the proceedings. Accordingly, users/parties are free to apply other rules on an ad-hoc basis and appoint mediators on the JIMC-Kyoto list of mediator candidates.

The purpose of these centres is to invigorate and enhance the advantages and merits of ADR held or administered in Japan so that Japan can be recognized as the best country in Asia for dispute resolution, as well as an economic industrial centre for global corporations doing business in Asia.

While Japan has lagged behind Singapore and Hong Kong in this area for a while, by comparison South Korea has been advancing in terms of international arbitration development and promotion. As such, the Japanese government is seeking to catch up and overtake these other countries in terms of utilization and efficiency.

ADR in Japan, across Asia

Historically, the number of international ADR cases in Japan has been low. In recent years, the number of arbitration cases handled by the JCAA was still around 20 per year. By comparison, the number of ADR proceedings in which Japanese corporations are involved as parties in foreign countries administered by bodies such as the ICC, SIAC, HKIAC and AAA appears to be high and increasing.

This is because while many Japanese corporations tend to agree to arbitration clauses for cross-border transactions, such as M&A and joint ventures, they typically select an arbitral venue outside of Japan. One critical reason is the lack of sophisticated facilities for holding international ADR proceedings in Japan. This has led to companies avoiding selection of Japan as a venue for dispute resolution, and opting for venues in foreign countries.

As a result, many dispute resolution practitioners in Japan and overseas, and their clients, believe that the establishment of these centres will have a huge and positive impact, and increase the number of cases handled in Japan. If expectations are proved correct, Japanese corporations may propose Japan more frequently in negotiations as a convenient or favourable forum (for both parties) for dispute resolution. Japan might also be viewed as a neutral third country for multinational companies doing business in Asia. 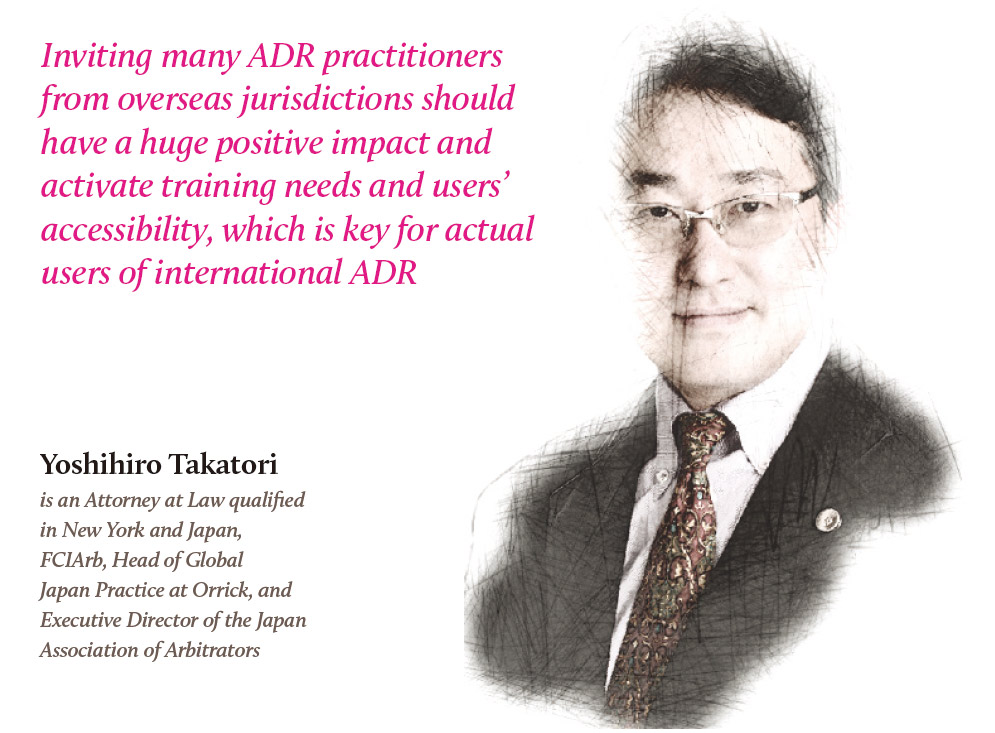 Tools to activate ADR in Japan

In addition to the establishment of the International Dispute Resolution Centre as discussed above, to maximize the advantage of these centres, how can international ADR in Japan be so invigorated as to become the venue of choice in Asia? Here are two ideas.

(1) An amicable legal culture of Japanese corporations and judges, who are experienced and familiar with facilitating settlement negotiations.

This is also the case in the Japanese courts, where the disputes are basically limited to domestic cases and language (Japanese only). But Japanese judges and users are used to amicable negotiation led by the judges, who can take a role as a mediator. As such, there is significant opportunity for using mediation, which can be combined with arbitration as needed to make a more complete and holistic process, as with Med-Arb-Med.

If Japan has a sophisticated, international ADR platform such that ADR can be conducted in different foreign languages, supported with sufficient resources and the ability to apply different governing laws and commercial cultures, whether common law or civil law, Japan will raise its profile in Asia as a place or venue of choice.

Another attractive reason to establish the centres discussed above is to maximize their use as venues for dispute resolution of claims involving intellectual property rights, and related to matters such as patent, trademark or copyright, licence contracts or stalled negotiations, and standard essential patent-related (SEP) disputes. SEP disputes, in particular, are expanding globally in multiple jurisdictions and involve many issues suitable for ADR.

It is widely recognized that Japanese corporations have been involved in various types of IP disputes in many different jurisdictions, including the US, Europe and Asia, due to Japan’s prominence in advanced technologies and products. Those disputes cases are often easily cross-border in nature due to the global nature of most businesses, the enforcement of IP portfolios by rights holders in multiple countries, or due to the governing law of IP licences.

Therefore, in cases where claims are made against Japanese corporations in the US and/or other jurisdictions, for example, due to a breach of a licence agreement or due to patent infringement, the parties might try mediation in Kyoto to resolve their issues.

Even where the parties cannot agree on the merits of the asserted claims, if the parties agree on a mediation “process”, they may be able to narrow the scope of disputed issues and reach settlement. If the agreement in question has an arbitration clause that arguably designates Japan, and the arbitrators determine that the tribunal’s jurisdiction in Japan is proper, this can be combined with the mediation process if the parties agree so that disputes in other jurisdictions might be included in a single solution.

Another commonly discussed reason for the small number of international ADRs conducted in Japan is the shortage of resources of international arbitrators, mediators and practitioners who can efficiently handle cross-border or international disputes in English that involve sophisticated multinational corporations.

While the JAA and CIArb Japan chapter provide some training courses, the opportunities have been quite limited. For example, the author undertook his fellowship course of CIArb in Shanghai, and took final exams in Hong Kong, both of which had not been available in Japan.

While this matter has been said to be a “chicken and egg” issue for a long time, the current situation should represent a big chance to increase those resources. Also, inviting many ADR practitioners from overseas jurisdictions should have a huge positive impact and activate training needs and users’ accessibility, which is key for actual users of international ADR.

CIArb and some international arbitration institutions such as SIAC, ICC and HKIAC, are quite active on providing such training of a global standard so that Japan may obtain sufficient resources and access to ADR practitioners.

We should take advantage of the very historical and remarkable timing of opening up the new International Dispute Resolution Centre and JIMC-Kyoto, utilizing various tools and devices to activate international ADR across Asia-Pacific. This should include a combination of arbitration and mediation, and IP dispute resolution, including SEP, globally triggered.

Accordingly, Japan can become a real international dispute resolution centre, or state, which may bring huge advantage for economic industries overall. For this purpose, we are diligently conducting and offering various promotional activities for users and training activities for practitioners, including mock-international ADR sessions, working with and obtaining support from the Japanese government and users associations such as the Japan In-House Lawyers Association (JILA).

With such strong motivation and organized preparation, I believe that a bright future of international arbitration and mediation is on the horizon for Japan.

Yoshihiro Takatori is an Attorney at Law qualified in New York and Japan, FCIArb, Head of Global Japan Practice at Orrick, and Executive Director of the Japan Association of Arbitrators 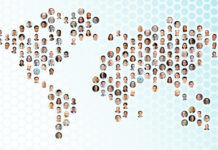 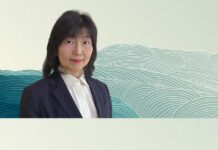 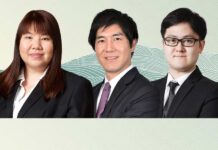 By ABM Nasirud Doulah and Amina Khatoon, Doulah & Doulah in Dhaka
As technology revolutionises the banking sector, brick-and-mortar retail is increasingly becoming obsolete as regulators jump to set new standards for inclusive finance
Foreign direct investment (FDI) is a key driver of economic development of an emerging country like Bangladesh
Bangladesh is an emerging economy in Asia that could maintain its steady GDP growth and a stable BB- credit rating as per S&P and Fitch in recent year