In two recent judgments, a division bench comprising Justice B D Ahmed and Justice Ashutosh Kumar of the Delhi High Court examined objections taken by defendants with respect to territorial jurisdiction of the court. In the two cases before the court, the plaintiff had claimed, inter alia, that it feared a violation of its rights by the defendants in Delhi and therefore a part of the cause of action had arisen in Delhi.

In response, the defendants, inter alia, argued that once the defendants launched the disputed goods elsewhere in the country, the jurisdiction of the Delhi High Court cannot be claimed on the basis of a quia timet claim, i.e., a claim based on the threat of harm in Delhi, as the alleged threat had been realized by the defendants’ launch of goods under the impugned mark elsewhere.In both cases, the defendants had already launched their products in Andhra Pradesh.

The single judges in the two cases agreed with the defendants and the plaints were directed to be returned. 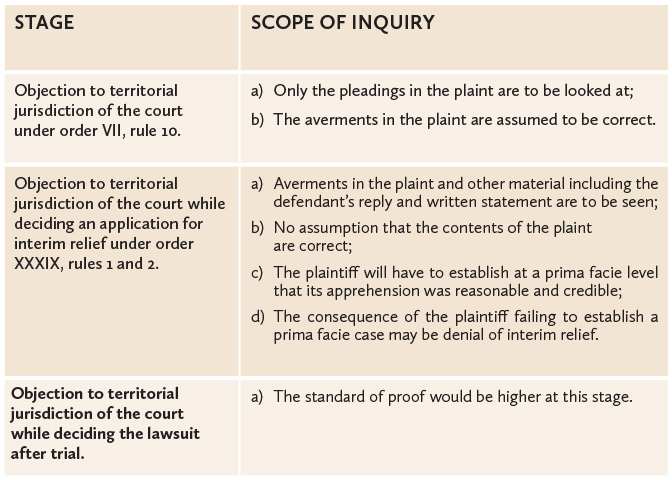 The division bench, in appeals filed by the plaintiff, clarified the law as follows:

(1) The threat of selling goods under the impugned trademark in Delhi would by itself confer jurisdiction on the courts in Delhi;

(2) While considering an objection to territorial jurisdiction under order VII, rule 10 of the Code of Civil Procedure (1908), the court must proceed on the assumption that the contents of the plaint is correct and the plaintiff’s apprehension stated in the plaint is also true;

(3) Just because the defendants were already selling products under the impugned mark in another state in India (Andhra Pradesh in these cases), it would not take away part of the cause of action based on apprehension of violation of the plaintiff’s rights in Delhi;

(4) “At the stage of filing of the plaint, it is only averment that has to be made with regard to a material fact. Substantiation of material facts is a part of evidence”;

(5) While considering an objection to territorial jurisdiction under order VII, the plaint has to be read as a whole;

(6) The court clarified the scope of inquiry into territorial jurisdiction at different stages of a lawsuit in the following manner:

SHRAWAN CHOPRA is a partner at Anand and Anand, and ABHILASHA NAUTIYAL is a managing associate at the firm

OECD’s Asean project seeks to foster competition in the region’s e-commerce sector
How long will it be before AI makes partner?

Claudia Salomon lays out ICC's strategic plan for Asia
Find out which are the best law firms in Indonesia
ESG principles in Asia
OECD’s Asean project seeks to foster competition in the region’s e-commerce sector
Please send any press releases, deal announcements, details of new hires, newsletters and any other news items to: news@law.asia