The global financial markets have seen some tectonic shifts lately, notably some changing power dynamics. The GameStop saga that unfolded earlier this year threatened to upend Wall Street. A motley army of part-time traders and members from social media site Reddit sent the struggling American videogame retailer’s stocks skyrocketing. These amateur traders almost foolishly bet against the house and, surprisingly, seem to have come out ahead.

The cryptocurrency rush that created instant millionaires isn’t that different. Investors with very little in common have come together to bet on fictional money, shunning the middlemen and conventional markets. The popularity of cryptocurrencies and the rally in their prices have put traditional financial institutions and governments in a fix; they are now playing catch up. 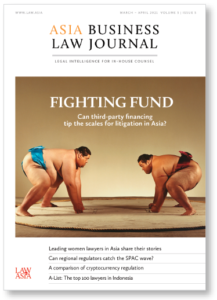 Our Cover Story, Fighting fund, discusses the trends in litigation financing in Asia. While most Asian jurisdictions do not allow third-party funding as yet, its growing popularity in more developed markets like the UK and Australia is making governments here do a rethink.

The two key financial hubs in the region are making moves to welcome the funding industry. Singapore has allowed third-party funding for international arbitration, including enforcement and mediation, since 2017, and Hong Kong allowed it in 2019. Singapore and Hong Kong provide a blueprint for reform and have demonstrated its benefits. Still, it may take time for third-party funding to shape the landscape of contentious matters in other jurisdictions due to differing and entrenched structures, cultures and norms.

Litigators and dispute resolution lawyers in the region expect more jurisdictions to introduce or relax their restrictions on litigation funding, possibly combined with collective redress reform.

“It will take several more years, especially in the bigger markets like China,” says Julien Chaisse, professor of law at City University of Hong Kong. “It is a matter of market maturity that has not yet been reached in Asia, but the trend is here.”

SPAC invaders, our feature on the boom of special purpose acquisition companies (SPACs), addresses the burning question of whether Asian financial markets have missed the bus on these instruments.

Also known as blank cheque companies, SPACs gained popularity in 2020 due to increased pandemic-led volatility in the capital market. Many companies do not have the patience to wait for a home listing when they need capital, and SPACs offer them a fast track to public markets. US markets also offer certainty and speed.

However, Asian regulators are still dawdling on whether to allow SPACs.

In our Head to Head feature, we make a regional comparison of crypto regulation in the region. Asian jurisdictions are cautious in developing legal frameworks around virtual currencies, but the volatile market and boundless evolution are pushing them into quicker action.

Our Asia-Specific annual feature interviewing leading women in law in Asia has become a popular read over the years due to the personalities we feature and the enlightening stories they share, some boldly inspirational, others emotionally charged. Putting the spotlight on some of the most successful women lawyers in Asia always delivers a must-read article.

The legal profession has long been harboured an entrenched “boys’ club” mentality, but moves from multinational firms such as Linklaters, Herbert Smith Freehills and Freshfields in electing women lawyers to lead their global operations is surely a sea change. Women lawyers, more than ever, are enjoying being independent and self-determined in both their personal lives and professional careers. However, in the Asian legal landscape, gender disparities persist.

Our feature tells the personal stories of 20 of the top women in law across Asia’s jurisdictions, drawing on a wealth of experiences. On offer are advice, experience and encouragement for the ones who follow.

This issue also features our Indonesia A-List, a guide to the top 100 lawyers in the country. And don’t miss our special directory of law firms in the Philippines.