The way ahead is never straightforward

As experience in the past few decades along with recent events have shown, propelling the Indian economy forward requires wisdom, out-of-the-box thinking in large doses, and a good helping of measures that engender trust between people, communities and religions.

As Infosys founder, NR Narayana Murthy, pointed out some time ago, no country has made economic progress without dealing with strife and distrust. His words made headlines at the time, as his was the first voice from among the upper echelons of corporate India to say this. 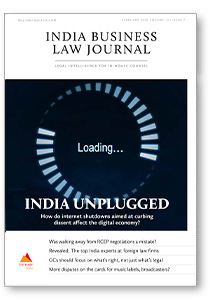 While valuable efforts to improve India’s standing in the World Bank’s ease of doing business index have progressed, there is only so much that can be achieved by tweaking and streamlining rules and regulations. Much needed investment will be forthcoming only when investors are convinced about the future, and can stomach the risks involved. This is unlikely while social unrest looms large. What will it take to lead the country out of its current impasse?

Among the current dilemmas is reconciling the lofty ambition of creating a digitally empowered society and knowledge economy with the reality of multiple internet shutdowns ordered to contain social unrest. There were more than 100 such shutdowns in 2019 alone.

Our Cover story analyses a recent ruling of the Supreme Court in Anuradha Bhasin v Union of India, where it turned its attention to the recent prolonged shutdown in Jammu and Kashmir. While the court stopped short of acting to restore the internet and other communications to the region as petitioned, it offered respite on some points. Suggesting that the government find a solution to the law and order situation, rather than order frequent shutdowns, the court quoted from a 1983 judgment of the English courts: “You must not use a steam hammer to crack a nut, if a nutcracker would do.”

In Bridges not barriers, we shine the spotlight on a proposed free-trade agreement in the Asia-Pacific region, which could potentially include more than 45% of the world’s population and account for about 40% of world trade. India declined to join the Regional Comprehensive Economic Partnership (RCEP), stating that its core demands of a level playing field, fair trade practices, transparency and market access during trade negotiations were not being met. Given the current economic situation that the country faces, this may prove to be a high-risk decision, especially since this region’s trade and growth potential remains largely untapped.

This month’s What’s the deal? focuses on an intellectual property rights matter that has been exacerbated by troubles at the Intellectual Property Appellate Board (IPAB). Vested with the power under the Indian Copyright Act to deal with compulsory licences and statutory licensing issues, the IPAB has been crippled on account of a lack of technical expertise, and more recently with a void at the top after its most recent chairman retired.

Relations between music labels and broadcasters, which have never been harmonious due to frequent clashes over rights and royalty related issues, saw new challenges after the IPAB was given the jurisdiction of Copyright Board in the Finance Act, 2017. A way out has since been found with Delhi High Court ruling that the IPAB hear matters pertaining to all categories of rights, but with compulsory licences set to expire from the current year, a fresh round of litigation may be on the cards.

In this issue’s Vantage point Neeta Sanghavi, from Avendus Group, proposes that the ability of general counsel (GC) to play lawyer-guardian – one who essentially moves beyond the question of whether something is legal to whether it is right – for their company is critical. She believes that the stratospheric losses suffered recently at infrastructure finance company IL&FS were on account of laws and regulations, ethics, spirit and “doing what is right” being put on the backburner.

She also asks if the lawyers involved were excluded from decisions, or was it that their guidance was superseded. Sanghavi argues that a GC’s decisions must have the backing of the CEO. This in turn implies that GCs report to the CEO and the board, in this manner allowing the CEO to set the tone for the company.

Our Intelligence report reveals India Business Law Journal’s International A-List. This list of 100 India-focused legal experts comprises lawyers who routinely fly in and out of India, guiding clients and adding considerable value to work being done in the country. Identifying this elite group of legal experts involved a month-long process, during which lawyers at Indian law firms, as well as India-focused in-house counsel around the world and in India sent in nominations and recommendations.