Fighting online counterfeiting may come at the cost of business

Taking action against counterfeiters is a worthy endeavour. Yet the chances of total victory may be slim, not least because the enemy in question has infiltrated the warp and weft of the marketplace, and society as a whole. As such, while putting in place robust regulation to fight this scourge, it is important to understand that the rapid pace of change in the digital world can provide the perfect cover for the counterfeiter. 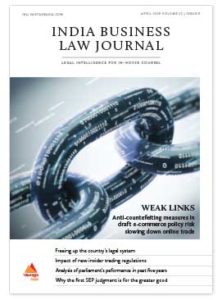 Numerous companies, both in India and outside, have attempted to tackle the risks posed by counterfeit products. At Alibaba, which has had its fair share of run-ins with regulators on this count, CEO Daniel Zhang has described counterfeiters as being “like bacteria in the air that we breathe”.

This is an interesting comparison. But what if, like drug-resistant bacteria, counterfeiters too learn to dodge the barrage of regulatory missiles being fired in their direction? This is naturally concerning for rights owners – many of whom will be in Boston next month to attend the 141st annual meeting of the International Trademark Association (INTA). India Business Law Journal will be there too, and this issue of the magazine will be circulating widely among delegates.

This month’s Cover story analyses one regulatory missile being proposed by the government: a recently released draft e-commerce policy that has put forward measures that would give companies more power to tackle counterfeit products sold on e-commerce sites.

What is being proposed bears some similarities to observations made in a case before Delhi High Court, which considered the role of an intermediary in a trademark dispute. But legal practitioners question how measures such as requiring registered trademark owners to receive notifications when their goods are put up for sale would work.

Gaurav Mukherjee, a partner at Remfry & Sagar, is of the opinion that “while notification of product listings to owners is definitely a step in the right direction, allowing the option for an owner to consent to all listings, including genuine products being sold through third parties may be regressive and not in tandem with the legal position.”

According to Shwetasree Majumder, the principal at Fidus Law Chambers, while the proposed measures will help curb the sale of counterfeit products online, the policy itself “is quite vague and undefined, and puts the entire onus of detecting and removing counterfeits on the marketplace instead of the brand owner”. This may well be a step in the right direction, but chances are it will be at the cost of slowing online trade.

This landmark judgment is an important milestone for companies and will encourage innovation in India.

Writing in this month’s Vantage point, K Satish Kumar, global head of legal and chief data protection officer of Ramco Systems, says that while the government has taken various steps in to ensure a stable and efficient dispute resolution system, such as the introduction of commercial courts in the Commercial Courts, Commercial Division and Commercial Appellate Division of High Courts Act, 2015, much more is sorely needed. While business opportunities are plentiful, doing business in India will continue to be risky as businesses shudder at the thought of being caught up in legal disputes in Indian courts.

In Inside out we turn the spotlight on the amended insider trading regulations that came into force on 1 April. The recent amendments notified by the Securities and Exchange of Board of India bring about some pragmatic additions and much-needed clarifications. The amended regulations have created an institutional framework to ensure that all intermediaries set up internal control mechanisms for prevention of insider trading and listed companies and market intermediaries have been in a rush to comply with the new rules.

India began its general elections in April. The world’s largest exercise in democracy will put many new faces in the country’s parliament. In this month’s Intelligence report we take a look at how the parliament performed over the past five years. The statistics make grim reading. The lower house of parliament – the Lok Sabha – worked for the second lowest number of hours, when compared with other full-term Lok Sabhas, since 1952.

It lost 16% of its scheduled time to disruptions, which is better than the previous Lok Sabha (37%), but worse than the 14th Lok Sabha (13%). Even as there has been a general decline in the number of sitting days and hours spent on real parliamentary business, the faith in Indian democracy perseveres.

The general elections are expected to see record numbers of voters turning out to vote and the chances are they will continue to want their elected representatives to make their voices heard.