Home Leader The tough get going

As the year grinds on and the pandemic shows no signs of receding, businesses are now regrouping and finding ways to move on. The new normal, as it is being called, is anything but normal, and the key qualities to thriving in this new era are resilience and grit. Individuals, businesses and governments are all adapting quickly, but the constant problem solving and crisis aversion sometimes seems like a game of whack-a-mole. 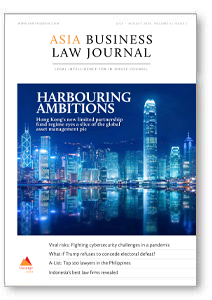 The world may yet just arrive to a better place once we have put the pandemic to rest, but complacency for now isn’t a choice.

In our cover story, Harbouring ambitions, we sail to Hong Kong, which is unrolling significant new legislation in a bid to keep up its reputation as the region’s financial hub. The Hong Kong Limited Partnership Fund Ordinance, effective from 31 August this year, seeks to snatch for itself a healthy piece of the massive private fund management business pie.

The special administrative region wants to offer an alternative home for private equity and venture capital funds that have over the years based themselves in offshore jurisdictions, but are seeing increasing pressure to shift their domicile as governments across the world tighten the screws on tax evasion, base erosion and profit shifting.

In Vanquishing viruses, we brought together an expert panel of senior in-house counsel from across Asia to discuss the challenges of safeguarding against another viral enemy, one that poses cybersecurity and data privacy risks. Data show that there has been a rise in covid-19-related phishing and ransomware attacks, and a slow response from IT teams, which have been spread thinner because of work-from-home restrictions. Our panel shares ideas and practical solutions from their own experiences on fighting these challenges.

Also in this issue, we feature two very distinguished legal professionals – a renowned legal scholar and a retired chief justice.

In Election day fireworks, we interview American constitutional expert Lawrence Douglas about some frightening scenarios for the world’s most important electoral event this year. Douglas is the author of Will He Go? Trump and the Looming Election Meltdown in 2020, which takes a look at the legal and constitutional consequences of a possible refusal by US President Donald Trump to acknowledge defeat in the 2020 election.

Douglas pulls no punches. For instance, talking about the impact of Trump on Asia, and China, in particular, he says, “…even if China remains his [Trump’s] favourite object of demonization, I don’t see him taking forceful steps to try to check Chinese power, both in terms of his generally chaotic administration and a largely dysfunctional administration.”

We also talk to the former chief justice of Canada, Beverly McLachlin, the first woman in that post, in Foreign yet familiar. Justice McLachlin was invited to sit on Hong Kong’s Court of Final Appeal and is an international judge of the Singapore International Commercial Court. She shares her experiences as an international judge in Hong Kong, which she says has been a “positive experience”. An immersion into the local society is required before undertaking the task of a foreign judge, she advises.

This issue also brings to you the Indonesian 2020 Law Firms Awards. This year’s winners are an interesting mix of traditional independent law firms, big international players and disruptive start-ups, a picture reflective of a diverse legal market.

Make sure you also don’t miss our very popular Philippines A-list, with profiles of the country’s top 100 lawyers.

By Mouhamed Kebe, Mohamed A Dieng and Annick Kobenan, Geni & Kebe
The country is seeking a concrete direction as cryptocurrency trading heats up

By Fidelis Adewole and Marian Asuenimhen, G Elias & Co
How the budget will affect the taxation of M&A deals
Please send any press releases, deal announcements, details of new hires, newsletters and any other news items to: news@law.asia