Home Leader Reaching for the stars

Can the new insolvency regime achieve all that it sets out to do?

A veritable logjam of cases awaits the attention of the National Company Law Tribunal, suggesting the task of recovering unpaid corporate loans is very much a work in progress. While newly emboldened creditors knock on the doors of the tribunal, cases are delayed by parties with deep pockets who have run rings around the system. This is expected and until ambiguities inherent in the new laws are ironed out, these battles will continue in courts and tribunals. 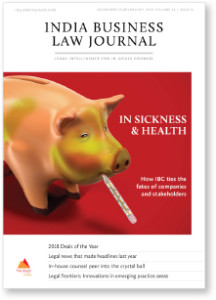 Most commentators agree that the Insolvency and Bankruptcy Code has triggered a change in mindset. Promoters and companies are wary of falling foul of creditors. This recalibration of power is to be applauded.

But what of the specifics of the new law itself? Are the timelines stipulated for resolution of cases achievable? They may not be, given that several cases have so far overshot time limits and are as yet unresolved. Add to this the challenges of transferring the reins of a troubled company to resolution professionals, especially given that there may not be enough of them. These distinctive and much-touted features of the Insolvency and Bankruptcy Code may prove to be its Achilles heel.

Be that as it may, the Insolvency and Bankruptcy Code has certainly shaken up the status quo and in this issue’s Cover story (In sickness & health), we look at the evolution of the code itself, the impact it has had on Indian promoters and companies, and a series of key tweaks to the law to address contentious issues. This includes an amendment that allows the withdrawal of an application made to the tribunal to resolve an insolvency, which crucially allows promoters and companies to reach a compromise with their creditors. The trigger for this amendment was a ruling by the Supreme Court whereby it chose to deviate from existing law using its power under the Indian constitution to do “complete justice” in any cause or matter before it. This was not the first time the court had done so, but nevertheless, it set an important legal precedent for recovery proceedings.

The threat of insolvency will trigger heightened M&A activity and evolving jurisprudence now ensures promoters who are in genuine trouble can either reach a settlement with their creditors or exit. This is a major shift.

Writing in this issue’s Vantage Point, three in-house lawyers share their views on developments that are likely to shape India’s legal and business climate in 2019. While K Satish Kumar of Ramco Systems cautions that companies cannot afford to be non-compliant with emerging data privacy laws across the globe, Shantanu Mukherjee at Lupin sees challenges on account of the world becoming a more volatile, uncertain, complex and ambiguous place. “A tweet can disrupt a strategy, an alliance between your customers can halve your margins, and regulatory changes can open or close entire markets,” says Mukherjee, adding that in-house counsel must anticipate, mitigate and live with all manner of risk, and bring more than mere legal expertise to the table.

In 2018: The year that was, we focus on issues and policy developments that made the headlines in the Indian media. Unsurprisingly the fight mounted by family-owned conglomerates that fought tooth and nail to regain control of their assets and their reputation in the face of attention given to non-performing assets of banks dominated headlines receives top billing. Other issues include the fallout of the telecom regulator’s recent consultation paper that sought to regulate over-the-top content.

This issue’s What’s the deal? celebrates the triumphs of lawyers both in India and outside over the past year, with a compilation of the top 50 India-related deals and dispute resolution cases of 2018. The leading deals of the year were identified after an extensive shortlisting and research process and while some were chosen for their sheer size others made it onto our list on account of their complexity, innovative aspects and the precedents that were set. Deals include Walmart’s acquisition of Flipkart, big wins for the Insolvency and Bankruptcy Code such as the successful resolution of Bhushan Steel, and the first initial public offering in the Indian defence sector, which took many years to reach fruition.

While analysing the significance of each deal, we identify the law firms and lawyers who guided it through its many twists and turns.

In Intelligence report (In a soup), we take a detailed look at the Legal Metrology Act, 2009, and Legal Metrology (Packaged Commodities) Rules, 2011, and what it means for those on the ground. Introduced to ensure pre-packed products have certain mandatory declarations for customers to have the key information to make purchasing decisions and not be duped by unscrupulous sellers, it is now the bane of many manufacturers, packers, importers, retailers and wholesalers who find themselves penalized and prosecuted for violations that may not be material, or are unintentional. Action is needed at legislative and executive levels to ensure the implementation of the act and rules that are not an impediment to the ease of doing business in India. Only then will the legal framework for metrology deliver what it is intended to do.