For our cover story, A legal legacy, we have an exclusive interview with the general counsel of the Asian Development Bank (ADB), as he completed his last days working for the bank. Chris Stephens is returning to the US as general counsel of the International Finance Corporation (IFC), a sister organization to the World Bank. 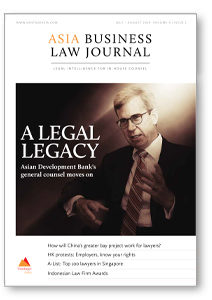 Stephens discusses current issues at the bank. It is on the cusp of redefining its relationship with China, and India looms large for the sheer number of ongoing and upcoming projects.

Its greatest challenge, however, is what the general counsel sees as an urgent need for change from within, the need for governance reforms within a leadership structure that has served well since the bank’s inception in 1966, but, with the particular challenges of the early 21st century, it desperately needs an upgrade. This revealing interview looks at Stephens’ legacy at the ADB, and the big issues he identifies for the bank in the immediate future.

We also feature HK protest protection an interesting Q&A which, during Hong Kong’s summer of unrest, may prove invaluable to businesses operating in the city, where potentially dangerous protest actions can strike anywhere at any time.

We asked an expert on the special administrative region’s employment law, Lewis Silkin Hong Kong’s managing partner Kathryn Weaver, just what an employer’s rights and responsibilities are when it comes to staff safety during a protest. Are you liable under certain situations? And what about leave arrangements if your staff members decide to join the protests? Weaver answers a variety of questions that you may have been asking as the protests drag on. A must read for any local or foreign business operating in Hong Kong.

In Bay Watch, we take a closer look at the Guangdong-Hong Kong-Macau Greater Bay Area (GBA) project, and ask how a project of this size can function effectively. And where will the demand be for legal services?

With a project that includes nine cities with local legislative powers, two special administrative regions (Hong Kong and Macau), and involves two major legal systems and three different customs territories and jurisdictions, there is bound to be risk and opportunity.

This issue also features the Indonesian Law Firms of the Year.

Congratulations also to the four winners in each of the 19 practice areas who received our awards. Awards were selected based on votes, references and qualitative information received from in-house counsel and other legal professionals in Indonesia and around the world. A voting form was posted on our website and thousands of in-house counsel, lawyers at international firms and other Indonesia-focused professionals were invited to vote.

Indonesian law firms were also asked to make submissions in support of their candidacy for awards. These submissions, combined with research by Asia Business Law Journal’s editorial team, played a supporting role in the judging process.

Be sure also to check out the latest in our Head 2 Head series, which looks at comparisons in patent law. Some of Asia’s major jurisdictions are witnessing key developments in patent law, from enforcement to embracing new technology. Our comparisons shed some light.

The A-List for this issue looks at the top 100 Singapore lawyers. Comments submitted by clients of the lawyers to Asia Business Law Journal suggest that a top lawyer in Singapore needs to be an effective and efficient negotiator with good business acumen, and “someone who knows how to pick the right battles”.

Observations such as this point to lawyers with an extensive knowledge of the law, but who are also attentive and can provide practical and strategic solutions. In addition, most international clients seek out Singapore lawyers with a range of expertise and an international mindset.