The frequent disruptions and walkouts that mar parliamentary sessions are part of the country’s democratic tradition, but are also increasingly emblematic of a corrosion of purpose that is choking the system. 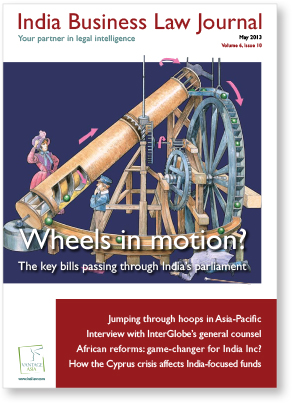 Reports that both the upper and lower houses of parliament worked for only around 50% of their scheduled hours during the recently concluded budget session may barely be noticed, given the recent run of headline-grabbing scandals that have rocked India’s political establishment. However, the fact that only two bills were passed – 16 were introduced – and that the budget went through without any discussion, should be cause for concern. What does this mean for companies operating in India, which are faced with planning for all eventualities?

Over 100 bills are pending before parliament. While almost all would have repercussions on how business is done, this issue’s Cover story provides information on nine key bills that we believe would have major implications for domestic and international businesses.

These include a bill to replace the Companies Act, 1956, which would shift the onus of regulation and oversight over management away from the government and towards shareholders, and The Forward Contracts (Regulation) Amendment Bill, which would usher in trading in all commodity derivatives and also options on goods and commodity derivatives. This bill also seeks to transform the Forward Markets Commission into an independent regulator like the powerful Securities and Exchange Board of India. While several of the bills have had chequered histories, understanding the changes they would trigger will be vitally important for lawyers across India.

At InterGlobe Enterprises – better known as the majority shareholder in India’s premier budget airline IndiGo – group general counsel Neena Gupta finds that working out how existing structures will need to be changed in light of any changes to the law is an ongoing exercise.

Gupta is the subject of our first in-house counsel profile (Going beyond lawyering), which aims to give readers a flavour of what it takes to manage the legal function of a company operating in India. Gupta strongly believes that companies cannot meet their commercial objectives if they “don’t have an intervention of a lawyer earlier on in the game”. One of a new breed of lawyers who recognize that being an in-house lawyer is not just about lawyering, she advises in-house counsel to learn and understand the business, as that is the only way they can provide advice that helps companies meet their business objectives and in so doing add value to the decision making of the company.

Providing advice for companies looking to acquire or merge with entities across the Asia Pacific is one area that clearly needs more than just legal skills and expertise. As detailed in Entering restricted markets, acquiring a business in the Asia Pacific region involves operational and execution challenges that can sometimes relate to the level of sophistication of the target company. This in turn affects the negotiation process and the execution of the M&A deal and requires legal counsel to find practical solutions to a wide variety of issues.

Also needing advice are investors who have been using special purpose vehicles in Cyprus as stepping stones for investments into India and who are concerned that they may be affected by a banking crisis that is gripping the Mediterranean island. A Cyprus-India double taxation avoidance agreement (DTAA) makes the jurisdiction particularly attractive for such investors and although international banks, typically used by investors, are largely unaffected by the crisis, the reality is that there has been an impact and people are worried.

As we detail in Faltering banks and fickle funds, some investors are now using banks in other jurisdictions to route remittances from India. Our coverage includes input from Bijal Ajinkya, a partner at Khaitan & Co, who explains that while this could not have worked for investments routed through Mauritius – which is by far the most popular route for investments into India – the terms of the Cyprus tax residency certificate allow remittances to be rerouted without losing benefits under the DTAA.

This issue’s Intelligence report provides a look at legislative reforms sweeping across countries in Africa, which are increasingly attracting outward investment from India. Our report explains that in some cases, legislation might not be new but recent trends in implementation may have strong implications for businesses. For example, antitrust regulators in South Africa have recently begun to look carefully at how a merger or acquisition could affect public interest issues. We detail how several countries are redesigning their laws relating to resources, mining and exploration, competition and taxation. And the reforms don’t end there.

What does this mean for Indian companies investing in Africa? Writing in this issue’s Vantage point, Sanjeev Gupta at Emerging Opportunity Consulting notes that “Africa is ﬁnally beneﬁting as its riches are not simply being robbed, but rather exchanged for investments and inward remittances from countries such as India.” He advises Indian companies to adopt an approach that is “granular in nature” even as it may be “pan-African in vision”. For, as he says, Africa is a land not to be ignored, especially by Indian companies that know how to thrive in chaos.

Find out which are the best law firms in Indonesia
The definitive list of the country’s leading private practice lawyers
How long will it be before AI makes partner?
Claudia Salomon lays out ICC's strategic plan for Asia
Please send any press releases, deal announcements, details of new hires, newsletters and any other news items to: news@law.asia