Time to return to the drawing board

As concern mounts over the health of the Indian economy there is a growing realization of the enormity of the task at hand. As has been widely reported, not only has economic growth dipped, but investor sentiment and confidence appear to have taken a hit. Add to this the persistent unemployment problem and no real hope of a much needed surge in job creation. It is time to rethink the way forward. 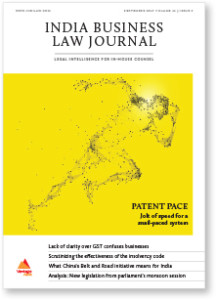 The recent revival of a five-member economic advisory council to the prime minister suggests that we can expect deeper introspection at the highest levels and, if so, it is very welcome. There is little doubt about the great potential in regions and communities around India, but that potential continues to lie dormant and can only be realized through out-of-the-box thinking and strategizing. Are India’s politicians and policymakers up to the task?

This month’s Cover story takes a close look at one area where a return to the drawing board of sorts has produced some progress: the Indian Patent Office. As a result of changes made in the past few years, India recently issued a patent in a mere 113 days. This feat, unthinkable a year or two ago, was made possible through the introduction of key procedural changes including allowing applicants to file requests for the expedited examination of patent applications. To ensure such progress the patent office recently increased the number of patent examiners and as we detail in our story this can benefit both international applicants and start-ups.

In Payback time? we turn to another area where legislators have evidently resorted to out-of-the-box thinking: the resolution of insolvencies. The Insolvency and Bankruptcy Code, 2016, provided fresh thinking on the way forward for non-financial entities. This latest attempt at orderly resolution of insolvencies and bankruptcies in India has been praised for providing a linear and time-bound process. While lawyers see great potential in insolvency as a practice area, the availability of highly skilled insolvency professionals is vital. Large numbers have been registered, mostly in Delhi and Mumbai, and they will need to be up to the challenges before them.

This month’s What’s the deal focuses on the new goods and services tax (GST), which is transforming India’s indirect tax landscape. While problems within the IT backbone of the system, the all-important Goods and Services Tax Network, are expected to settle down, it is issues like an inherent lack of certainty that have spooked taxpayers. Add to this a scenario where laws in some areas appear to be at odds with each other, and the threat of an anti-profiteering regime, and the disquiet of companies such as Hyundai, which went public with its criticism of the new regime, appears real. Has the government bitten off more than it can chew?

In Shaping a concrete destiny we return to China’s Belt and Road initiative with specific examples of how law firms are bringing the scheme’s dreams to fruition. The initiative is a shot in the arm for project finance professionals at law firms, who expect it to add considerable depth and complexity to their practices. Many are also aware that there could be choppy seas ahead. Indian firms in particular have erred on the side of caution when assessing the outcomes and advantages of this massive strategy. They point to most domestic firms in both China and India lacking any understanding of the other jurisdiction. Be that as it may, what is clear is that the Belt and Road initiative may prove to be one of the most enduring and challenging projects yet seen, and that many law firms might find themselves not only helping to create infrastructure, but also conducting exercises in nation building.

Writing in this issue’s Vantage point Vinod Mahboobani, chief legal officer and general counsel at KFC Global and Pizza Hut International, argues that in almost all cases, “termination of the franchise agreement or taking the dispute to an arbitral tribunal or court should be considered as a last resort”. Interesting food for thought, especially when seen against the backdrop of the headline-grabbing dispute between McDonald’s and its joint venture partner in India, which is threatening its operations in the northern and eastern regions of the country.

In this month’s Intelligence report we provide a roundup of important commercial bills that were debated and passed during the recent parliamentary session, and also assess their potential. Several bills introduced and discussed affect the economy and ease of doing business in India. These include efforts to reform India’s labour laws that have been pending for decades. Seeking to consolidate 44 existing labour laws into four codes, the government introduced the Code on Wages, 2017, during the session. Three more codes on industrial relations, social security and welfare, are at the draft stage.

The recently concluded monsoon session of parliament also saw the passing of the Banking (Regulation) Amendment Bill, 2017. This piece of legislation will allow the Reserve Bank of India to issue directions to banks to initiate recovery proceedings against loan defaulters. The jury is still out on whether this is wise. The good news, however, is that debates and discussions both inside and outside parliament continue to fuel attempts to forge a clear way forward.

Look for more regular updates on sessions of parliament in future as we include this coverage to provide yet another level of valuable intelligence and insight for the legal community.

How will the new codified labour laws fare in a transformed working environment?
Delhi High Court has started to issue dynamic injunctions against IP infringers
How can IP owners tackle infringement activity that has dramatically risen during the pandemic?