Ambivalent attitude towards foreign investors has its drawbacks

Yes, we offer protections for foreign investment, but no, we cannot say we won’t change our mind about it. This seems to have been the government’s mantra in its dealings with foreign investors, a prime example of which was the watering down of protections offered in a draft bilateral investment treaty (BIT) made public a few years ago. India’s ambivalence in this respect has been a cause for concern. 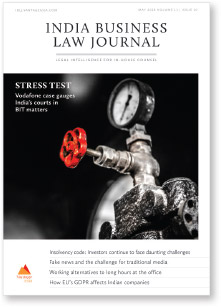 Yet, the tide may have turned. Not only does India have a growing need once again for foreign investment, but the government must also face pressures from within on account of its growing international footprint. If the many Indian companies that operate outside India need a level playing field, then surely they have to offer the same to foreign investors in India. Are they not two sides of the same coin? And can the government look the other way when foreign investors – many of whom they have actively wooed – face hurdles in India?

This month’s Cover story focuses on significant happenings in the world of BIT arbitration, used by both Indian and foreign investors to ensure their investments are protected against actions of the host-state. Delhi High Court recently refused an injunction sought by the government against an arbitration initiated by Vodafone under the India-UK bilateral investment promotion and protection agreement. The specifics of the case are somewhat long-winded but its outcome has pleased the arbitration community, who have applauded the anti-interventionist stand taken by the court.

However, the court also conveyed a message in its ruling – that Indian courts are not giving up their powers to intervene in an investment treaty arbitration. This is the first articulation of a sentiment that is essentially contrary to the Convention on the Settlement of Investment Disputes between States and Nationals of Other States, 1965, which excludes the jurisdiction of courts. India is not a signatory to this convention and the assertion of the authority of the country’s courts in this area will no doubt have implications for other treaty-related disputes between foreign investors and the Indian state.

This issue’s What’s the deal? analyses the changing dynamic between debtors and lenders, as well as the opportunities arising as a result for investors. The insolvency law has triggered a reshaping of business in India, while also giving creditors a much-needed upper hand in dealing with debtors. With nearly US$210 billion of stressed assets up for grabs, investors have been circling companies that are on the verge of bankruptcy. But legal challenges abound and one in particular – demonstrating that the resolution applicant is not connected with the promoters and senior management of the company – requires potential investors to virtually walk through fire. Until there is more certainty on the laws in this area, stakeholders will rush to the courts for clarification.

In Seeking simpatico, we look at the in-house legal team–external law firm relationship, which until now has been an example of a somewhat stereotypical relationship, with corporate legal teams wanting the best outcome for the lowest price while law firms seek to maximize billable hours. Here, too, there is a subtle shift, where building relationships across industries has become vital. In the legal domain, this means clients must trust and feel a personal connection to external counsel. Clients invariably return to counsel who devote time, energy and resources into understanding their business, ethos, culture and individual requirements.

Continuing on a similar theme, in Finding satisfaction at work, we make the case for flexible working arrangements for lawyers that must go beyond allowing them the occasional work-at-home day. While corporate law has become a sought-after option for legal professionals, Indian law firms may have to do more to allow flexibility in the wider sense, which among other things includes creating an atmosphere where sustainable living and work-life balance are encouraged in real terms across all designations.

Writing in this month’s Vantage point, Dibyojyoti Mainak, general counsel at InShorts, a news summarizing app, provides his insights on fake news. Asking if mass ignorance is better than half-truth or misinformation, and if removal of infringing speech is the only way to tackle such issues, Mainak argues that the onus must be placed on social media platforms to sufficiently warn their users about the veracity, or lack of it, in their content.

Be that as it may, the introduction of a new regime for the protection of personal data in the EU is changing the status quo with regard to data privacy. This issue’s Intelligence report provides a primer on the General Data Protection Regulation (GPDR), and what companies must do to comply with it. While Indian companies that hold data on EU residents, can face large fines and lose significant commercial relationships if they do not comply with the GPDR, it provides an opportunity to demonstrate that companies understand the importance of data protection. This can only be good for companies, and society at large.